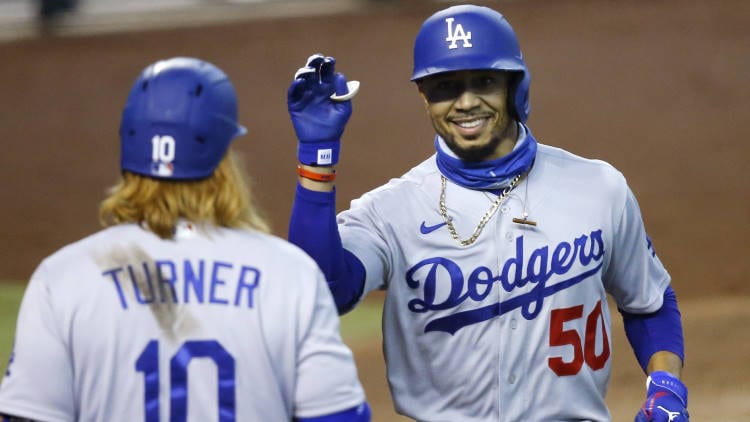 We have expert betting tips for three of the best MLB games this Sunday, August 9.

We look at the Yankees vs. Rays, Astros vs. Athletics, and Giants vs. Dodgers. All three games should create plenty of interest and be excellent betting games for punters. Here are our MLB betting tips!

The New York Yankees are showing why they are one of the favourites to win the World Series this season. They have started 9-3 on the season and now send ace pitcher Gerrit Cole to the mount.

Cole is 3-0 on the season and with an ERA of 2.55, he will likely continue to dominant opposing batters this season.

He has given up three home runs but he has struck out 16 batters and only given up a total of 10 hits. That is dominant pitching but opposing pitcher Tyler Glasnow has made a good start as well.

Glasnow is 0-0 on the season but he has 14 strikeouts from only 8.2 innings pitched. He is a young stud that could carry the Rays on his back.

Overall, the Yankees have a much better hitting lineup, which includes Aaron Judge and a host of other power hitters.

We’re going with the Yankees in what should be a close contest.

Two evenly-matched teams do battle on Sunday as the 6-6 Astros face the 9-4 Athletics.

The Astros went through an ordeal in the off-season and they have done well to be competitive this season. They scored consecutive wins over the Angels and Diamondbacks before losing heavily on Wednesday.

Houston sends out Framber Valdez, who is 0-1 and has more strikeouts than hits. He will get better with experience and he’s coming up against a pitcher with similar results this season.

Oakland sends out Frankie Montas, who is 1-1 after pitching 16 innings so far. He is a solid pitcher who will likely pitch around five innings.

It is good form coming into this game and although we are predicting a close contest, the Athletics should be too good at home.

This is the first of 10 games in this series and it will be important for Oakland to get off to a winning start at Oakland Coliseum.

The Dodgers are the favourites to win the World Series and they are going out their business with aplomb.

LA is 9-4 after posting consecutive wins over San Diego, which followed an opening loss in the series. They have stayed relatively injury-free and although Mookie Betts is listed on the injury list, he’ll likely play this game.

Returning to the mound for the Dodgers is Cy Young Award winner Clayton Kershaw, who suffered an injury in his first game of the season.

Kershaw had shoulder soreness after striking out six hitters and giving up only three hits. He got the win in that game, so moved to 1-0.

He faces veteran pitcher Johnny Cueto, who is yet to register a win this season and his command hasn’t been overly impressive.

He has walked six hitters in 12.2 innings pitched and that’s not a good strike rate. However, he is a quality pitcher at his best.

The Giants are 6-8 on the season and although they have a young squad in 2020, they have managed to win a few games.

After dropping the first two games to the Rockies, they scored a 4-3 win earlier this week. That should give them confidence heading this game.

Based on results to date, we are picking the Dodgers. They will be short-priced favourites with bookmakers but include them in your MLB multi bets.