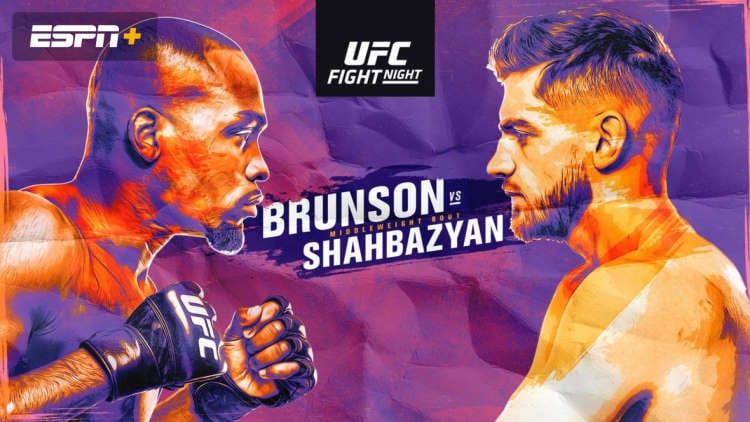 Its not uncommon for fighters to appear in the UFC with an impressive record of finishes on the regional circuit, but replicating that in the UFC is more challenging.

However, at just 22-years-of-age, Shahbazyan has added to a 7-0 record littered with first round finishes before joining the UFC with four more victories so far, including three that were ended in a combined time of less than a single round.

Now he’s getting a headline spot and his toughest fight to date against a fighter in Brunson who has been known for being somewhat wild and reckless at times in the past, but has recently reigned in that risky strategy in favour of a more measured approach that’s helped him net two solid decision victories in a row.

Shahbazyan will have to be careful about being overly aggressive in the early stages of this fight as Brunson is still a big hitter, has a 3″ reach advantage and could also look to counter that by using his wrestling too.

Shahbazyan’s own ground game seems fairly solid so far, although its not been tested too often and he’ll be looking to keep this one standing, where his speed and knockout power will make him a big threat.

Brunson’s chin isn’t the best and though he has the ability to end fights in an instant himself, I think Shahbazyan’s controlled aggression, confidence, better defense and finishing instincts are going to spur him on to a TKO victory here, though he might have to wait until the second round for a change to seal the deal.

Calderwood was all set for a flyweight title shot against Valentina Shevchenko before the champion pulled out due to an injury and so the Scottish fighter is now risking her spot at the front of the queue to take on this fight with Maia in the mean-time on fairly short notice.

Calderwood will enjoy a 2″ height and 1.5″ reach advantage on this occasion as she works her punches and kicks from range, while her seasoned muay thai background ensures that razor-sharp elbows and knees are brought into play both at close range and in the clinch.

This isn’t an easy fight for her though as Maia is fairly well-rounded and has some solid wins during her time in both the UFC and Invicta FC, where she was at one stage their flyweight champion.

Maia’s best bet here would be to focus on mat work, or at least mix things up to keep her opponent guessing, but I believe Calderwood will have the edge in the stand-up, and her ability to work from range, while still having dangerous weapons at her disposal if Maia does close the distance should enable her to secure a decision victory here.

Brown’s had a good couple of wins last year, racking up both a TKO and submission stoppage, which was a good way to bounce back from a somewhat freakish KO loss to Niko Price the previous year.

Now he’s going up against a dangerous opponent in Luque, who has only once in his last eight fights, and that was to former title contender Stephen Thompson. Luque is an exciting action-fighter who has the power to finish fights early, but won’t stop coming forward even if he doesn’t get the knockout, although he can eat too strikes along the way, so it’s just as well he’s got a strong chin.

Brown isn’t quite as potent on the feet, but he will have a 4″ height and 2.5″ reach advantage over Luque, and he can fight fairly effectively from range, which he’ll be hoping can stop his opponent from building up a head of steam offensively.

It should be a competitive fight, but I do feel Luque has the bigger firepower here and though Brown may have some success picking him off from a distance, Luque will be able to battle his way into a range where he can be effective and come away with a second round TKO stoppage.

These two have fought once before, with Vannata having to settle for a split draw after he was controversially deducted one point for an alleged illegal knee.

The rematch should be closely contested too, with Vannata being the more creative striker and also utilizing kicks effectively, while Green isn’t as dynamic, but he has good boxing and is effective on the counter.

Vannata has had cardio issues at times due to his fighting style, but seemed to have reigned that in a bit last time out during a decision win over Yancy Medeiros.

Green is the more consistent of the two, but I think there’s more spark to Vannata’s offense and in an otherwise close fight I think it could be his more eye-catching work on the feet and willingness to utilize kicks that can help him narrowly edge his way to a win on the scorecards.

Two fighters with talent here, though consistency has been an issue for them at times.

Both are very capable offensively on the feet and while grappling, though their defense on the mat has been questionable at times, particularly for Giles, who picked up back-to-back submission losses last year.

A significant factor here may be the size difference, with Holland being a big middleweight who’ll have a 3″ height and 7″ reach advantage over Giles, which will help him to manage the distance, though he will still have to be wary of Giles power.

Overall it’s a close fight, but though he can make bad decisions at times, I think Holland will be able to use his size to good effect on the feet to outland Giles and can also handle him on the mat and be a potential submission threat, though ultimately settle for a decision victory.

🤑 Who should you bet with for UFC Fight Night: Brunson vs. Shahbazyan?

Our top rated and recommended bookmaker for UFC Fight Night: Brunson vs. Shahbazyan is Sportsbet – JOIN HERE.Other top rated bookmakers for UFC on ESPN 13 include BetEasy, PlayUp, and SportsBetting.

💰 What are the best bets for UFC Fight Night: Brunson vs. Shahbazyan?

To find out our best bets for the full UFC Fight Night: Brunson vs. Shahbazyan fight card, read our latest UFC previews and betting tips!

📺 How can I watch UFC Fight Night: Brunson vs. Shahbazyan in Australia?

👊 Which fights are on the card for UFC Fight Night: Brunson vs. Shahbazyan?

Read our UFC Fight Night: Brunson vs. Shahbazyan preview and bettings tips to find out all the fights and best bets on the card!