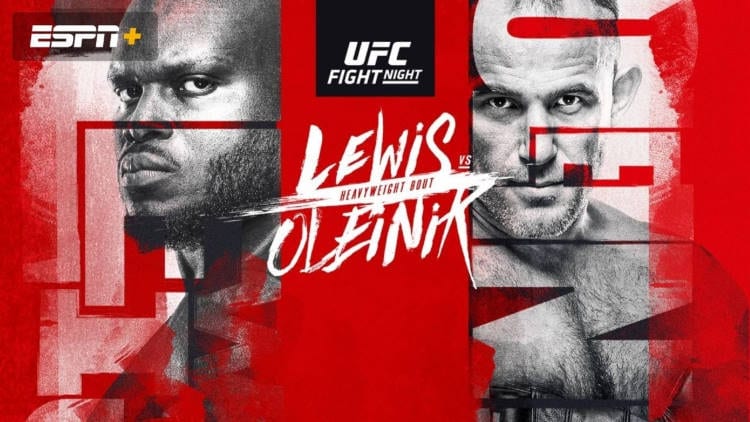 Both of these heavyweights are coming off back-to-back victories inside the Octagon, with Lewis having dispensed with his usual KO finish trademark in favour of decision wins against Blagoy Ivanov and Ilir Latifi, while Oleinik bested Maurice Greene by submission and then emerged on the right side of a split-decision verdict in a somewhat sloppy encounter with Fabricio Werdum.

This is a fight where both men are exceptionally dangerous in their field of expertise, with Lewis having deadly knockout power in his hands, even when his gas tank inevitably drains mid-fight, while the 43-year-old Oleinik has a whopping 46 submission victories throughout his career.

If you go back to 2018 you can see Oelinik dealing with another heavy-hitter in Mark Hunt, tapping him out in the first round, but then in 2019 two other knockout specialists Alistair Overeem and Walt Harris finished him early, which gives an indication of the tightrope he’ll be walking on Saturday night.

If Oleinik can survive the early onslaught then perhaps he may find it easier to get the increasingly exhausted Lewis to the mat and tap him out, but he doesn’t have great cardio either, and I think any time he closes the distance in this fight he’s going to be in real danger of eating a knuckle sandwich and that will lead to his swift demise by KO.

Weidman’s recent record is deeply troubling, having gone from a middleweight champion to a grizzled veteran who has lost five of his last six fights, including no less than three brutal KO’s and two TKO’s.

It’s sad to see as there’s no doubt that Weidman is still a skilled fighter with solid boxing, a strong ground game and a lot of heart, but at 36-years-old he’s past his prime and his chin has been massively compromised.

In Akhmedov he’s facing an opponent with significantly less star-power than the opponents he’s used to facing, but that doesn’t mean to say he’s been given an say fight by any means as the Dagestan fighter is currently unbeaten in his last six Octagon outings, defeating the likes of Ian Heinisch and Tim Boetsch along the way.

With all that being said, Weidman will have the comfort of a 2″ height and 5″ reach advantage here, and while Dominick Reyes may have switched off his lights easily, Akhmedov doesn’t possess that kind of power. In fact he hasn’t found a finish from strikes in quite some time, including all six of his recent fights going to the scorecards.

Akhmedov has a solid skill-set though and his grinding style has been effective thus far, but if Weidman’s chin can hold out – and that is a huge ‘if’ at this stage in his career – then I do think he’s still the better fighter overall and may still be able to get his hand raised, but it’s by no means a confident pick and I do fear for him if he goes back to fighting higher-ranked middleweight monsters after this bout.

These two are primarily strikers and will welcome the opportunity to engage on the feet here.

The two are roughly similar in terms of height and reach, but Stewart is the naturally bigger man, has the more muscular physique and certainly packs a punch to go with it, but at the same time it means he becomes less potent the longer the fight goes on and doesn’t offer up a great deal of volume offensively.

Pitolo used to fight at welterweight, but is a proven finisher in his own right, and while he may not have quite the power of Stewart he’ll be quicker and offer up more output offensively and may have the advantage the longer the fight goes on.

It’s a nicely balanced fight, but Stewart tends to falter most when he’s dealing with fighters who can best him on the mat and hasn’t been stopped by strikes in his career so far. In a hard-hitting stand-up battle like this I favour him to land the meatier blows here and emerge with a second round TKO stoppage.

Kunitskaya had a rather harsh introduction to life in the UFC when she was thrown in against Cris ‘Cyborg’ in her debut, but managed to regain her footing with back-to-back victories at 135lbs against Lina Lansberg and Marion Reneau, before suffering a TKO loss to Aspen Ladd last time out.

Now she’s going up against a short-notice opponent in Stoliarenko, who previously competed on TUF Season 28 and made it to the semi-finals before losing her only UFC bout to date in the finale, while more recently she became Invicta’s bantamweight champion.

Stoliarenko has a background in Lethewi, which has many similarities to muay thai, but it’s actually her submission skills that have been responsible for all but one of her nine MMA victories to date, although the level of competition she’s been facing has often been underwhelming.

I feel that Kunitskaya should prove to be the more solid all-rounder here and will be able to get the better of the action on the feet and hold her own in the grappling department to secure a decision victory.

Dariush is currently on a four-fight winning streak in which he’s not only been able to showcase his excellent grappling ability, but has also shown off his striking ability too, as evidenced by a KO win last time out.

The real problem that’s stopped Dariush from climbing higher up the ranks so far is that he suffered a couple of tough KO losses back in 2017-2018, which has left concerns about the quality of his chin.

Holtzman is a fairly solid jack-of-all-trades style of fighter, but skill wise I don’t feel he’s on Dariush’s level and on the mat in particular I think he’ll find himself coming off second-best and be forced to tap out inside of two rounds.

🤑 Who should you bet with for UFC Fight Night: Lewis vs. Oleinik?

Our top rated and recommended bookmaker for UFC Fight Night: Lewis vs. Oleinik is Sportsbet – JOIN HERE. Other top rated bookmakers include BetEasy, PlayUp, and SportsBetting.

💰 What are the best bets for UFC Fight Night: Lewis vs. Oleinik?

To find out our best bets for the full UFC Fight Night: Lewis vs. Oleinik fight card, read our latest UFC previews and betting tips!

📺 How can I watch UFC Fight Night: Lewis vs. Oleinik in Australia?

👊 Which fights are on the card for UFC Fight Night: Lewis vs. Oleinik?

Read our UFC Fight Night: Lewis vs. Oleinik preview and bettings tips to find out all the fights and best bets on the card!