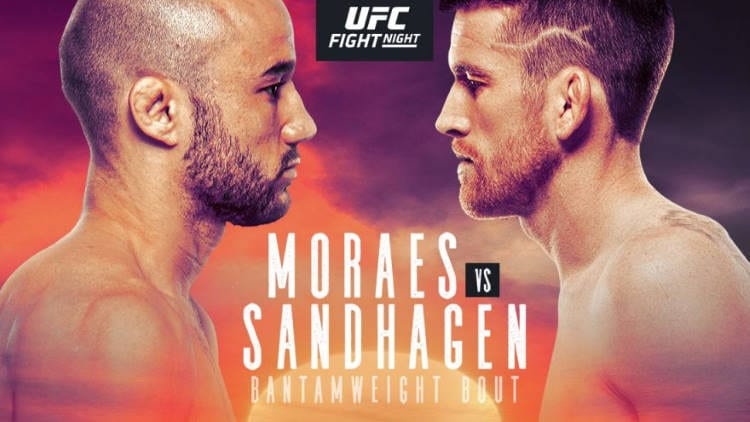 Given that he won what appeared to be a title eliminator against Jose Aldo by split decision it must have been a real slap in the face for Moraes to see the Brazilian still getting pushed as the next challenger for the belt anyway, and then Dominick Cruz coming in as a replacement instead after he dropped out.

Still, Moraes remains in place as the No.1 contender at 135lbs and he’s certainly one of the most dynamic and dangerous strikers in the division, as was demonstrated with his stunning succession of first round finishes against Aljamain Sterling and Jimmie Rivera, followed by a submission stoppage of Raphael Assuncao not so long ago.

Speaking of setbacks, Sandhagen was submitted early by Ajamain Sterling in June, but up until then he had been on a great run, winning his first five fights in a row against the likes of John Lineker, Raphael Assuncao and Iuri Alcantara.

Sandhagen will have a 5″ height and 4″ reach advantage over Moraes and he’s well equipped to fight from range, which will be important against someone with the Brazilian’s firepower and explosive instincts, particularly early in the fight.

Sandhagen offers up a high output of strikes though, while maintaining good cardio, which could be a factor here as Moraes does tend to slow as the fight goes on. That being said, Sandhagen has never been beyond the third round, while Moraes has five round experience from his WSOF days.

It should be a good competitive fight overall, but I do wonder about Sandhagen’s ability to keep the fast-moving, explosive Moraes at bay, and also being a lanky fighter his legs are going to be a big target for the Brazilian’s powerful kicks. With that in mind I’m going to lean towards Moraes to get back to winning ways here by TKO in the second round.

Barboza’s recent record may make for grim viewing, having won just once in his last six outings, but you have to take into consideration that his opponent’s included the likes of Khabib Nurmagomedov, Justin Gaethje, Kevin Lee and his last two losses were both close split decision verdicts.

Amirkhani is coming in as a late replacement for Sodiq Yusuff and presents a completely different kind of challenge, as unlikely the man he steps in for, the Finnish fighter is going to be much more focused on getting this fight to the mat in order to take advantage of his excellent submission skills.

The problem for Amirkhani is that Barboza has excellent takedown defense and will punish sloppy attempts with razor sharp knees, and it’s worth also noting that even though he’s very much a striker, he’s only been submitted twice in his entire 29-fight career.

If Barboza does shut down those attempts then he’ll have a 1″ height and 3″ reach advantage to work with and some of the most technical striking in the game. As such, though Amirkhani isn’t a sitting duck on the feet, I think he is going to find himself outgunned and outclassed here and Barboza will catch him as he gets increasingly desperate to secure a takedown and deliver a TKO finish.

Heavyweight fighting of the most plodding kind here as Rothwell and Tybura both seek to extend their current two-fight unbeaten runs.

Rothwell is a rugged veteran whose best moments in recent years tend to be when he shows off his submission skills, but more often than not he prefers to just engage in a slow-paced stand-up fight in which he gets punched in the face much more than he should, but is able to absorb it and land some of his own in return.

Tybura similar in many respects, although he’s significantly less durable. With that in mind if there is a finish I do favor it to come from Rothwell, but I fear it might not come, which will leave us with a tedious mix of relatively uneventful, slow-burn stand-up and clinch work, which Rothwell will just edge out enough to secure a win on the scorecards.

Markus Perez will be facing a short-notice newcomer in this fight, and an interesting one at that as Du Plessis is a former EFC Africa welterweight and middleweight champion who also won the KSW welterweight title too a couple of years ago.

Du Plessis is a proven finisher, whether on the feet with his kickboxing ability or on the mat with submissions, which is where the majority of his 13 finishes in 14 career victories have come from.

Meanwhile, Perez has a fairly underwhelming 2-3 record in the UFC, but it’s worth keeping in mind that even before he came into the promotion he was proving his worth with a trio of wins over former and future UFC fighters like Paulo Thiago, Iuri Alcantara and Ian Heinisch.

Perez could be a real handful for Du Plessis on the mat I think, but early in the fight his power will also have to respected. However, Perez tends to load up on single strikes and doesn’t have the best gas tank, so I can see Du Plessis’ kickboxing combination work getting the better of the stand-up action here.

It’ll be interesting to see who comes out on top here. Du Plessis is a promising addition to the roster, but Perez is a bit better than his recent record suggests and with his opponent not having the best takedown defense I can see him getting the upperhand on the mat and emerging with a submission stoppage.

Aspinall’s blink and you’ll miss it UFC debut saw him TKO Jake Collier in just 45 seconds and now he takes on a newcomer from France in Baudot.

Aspinall is an in-shape heavyweight with good hand-speed, boxing combinations and movement. while he also has a solid jiu-jitsu base. He’s more sound technically than most UFC newcomers we see in the division, though he can be a bit front-foot heavy and leads with his chin at times.

Baudot comes into the UFC with an 8-1 record and plenty of finishes via strikes, but the level of competition he’s faced is nothing to write home about and it’s worth noting that he only got his last win due to a DQ after being submitted, and that was a year-and-a-half ago.

Baudot certainly has power, but his striking technique is lacking and I think his winging punches will come off second best against Aspinall’s faster, crisper and more accurate offense and lead to a first round TKO finish.

🤑 Who should you bet with for UFC Fight Night: Moraes vs. Sandhagen?

Our top rated and recommended bookmaker for UFC Fight Night: Moraes vs. Sandhagen is Sportsbet – JOIN HERE. Other top rated bookmakers include PlayUp, and SportsBetting.

💰 What are the best bets for UFC Fight Night: Moraes vs. Sandhagen?

To find out our best bets for the full UFC Fight Night: Moraes vs. Sandhagen fight card, read our latest UFC previews and betting tips!

📺 How can I watch UFC Fight Night: Moraes vs. Sandhagen in Australia?

👊 Which fights are on the card for UFC Fight Night: Moraes vs. Sandhagen?

Read our UFC Fight Night: Moraes vs. Sandhagen preview and bettings tips to find out all the fights and best bets on the card!