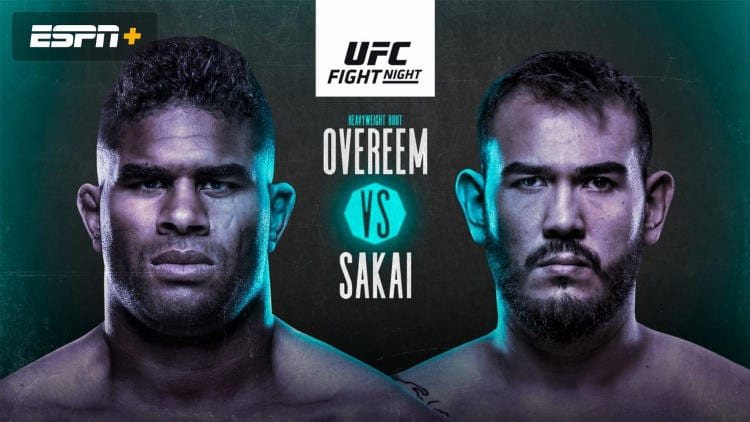 You have to take your hat off to the 40-year-old Overeem, who has been (T)KO’d a scary amount of times throughout his long career (Seven times in the UFC alone), yet keeps coming back from the dead and racking up big wins along the way, including a recent 3-1 run in the Octagon.

Last time out he TKO’d Walt Harris in the second round, though it’s worth remembering he was actually dropped earlier in the fight, which speaks to his fragile punch resistance, but also to his will-to-win even at this last stage in his career.

In Sakai he’s fighting a man 11-years his junior who has lost just once in his 17-fight career to date, though it’s only in recent times that the quality of competition he’s been facing has ramped up, leading to a KO win over Marcin Tybura, but only split decision victories against Andrei Arlovski and Blagoy Ivanov.

For my money Overeem is Sakai’s biggest test yet. While Sakai is a solid striker and certainly has the power to trouble Overeem if he can find his chin, he’s not got the kind of athletic, explosive offensive that’s going to catch him off-guard.

Instead I think this could be a slower paced kind of fight that will favor Overeem’s more technical striking, while he may well also dip into his wrestling reserves here as that’s an area where Sakai is more vulnerable, and whether on the feet or the mat, I like ‘The Reem’s’ chances of picking up a stoppage victory here.

OSP’s curious career continued last time out when he stepped up to heavyweight for a single fight and lost in a dull split-decision verdict against Ben Rothwell, and now he’s back down to light-heavyweight for a fight with Menifield that was recently delayed due to OSP testing positive for Covid.

Saint Preux will welcome the fact that he’s got a 3″ height and 4″ reach advantage here, but he’s the kind of fighter who’s never fully brought his physical and athletic gifts to bear and instead has opted for a low-output approach from range that’s mostly based around kicks. His ground game is more solid and his knack for delivering von-preux chokes will always be a feather in his cap, giving the sense that it’s his grappling that he should be focusing on more often.

Menifield is someone who fights with much more purpose and he’s a big hitter, with all nine of his victories to date having come in the first round. However, as is often the case with that type of fighter, he can start to fade and become less of a threat if he doesn’t secure an early stoppage.

With that in mind I think OSP’s slower paced approach could pay dividends here as he’s not easy to put away and could capitalize on his opponent’s depleted energy reserves later in the fight, either to edge the action on the feet to get a decision victory, or to take him down and find a submission.

Pereira is a wildman who treats the Octagon like his own personal playground as he unleashes all kinds of exotic techniques, which needless to say makes him lots of fun to watch.

However, the problem is that he often seems more eager to entertain and explore his creative options than to choose the most effective tools from his offensive arsenal at the right time in order to win the fight, while significant cardio issues and careless errors, such as landing an illegal knee against Diego Sanchez that resulted in a DQ loss, have also held him back.

As for Imadaev, he entered into the UFC with all eight of his career fights having ended by way of strikes, but since then he’s lost two in a row inside the Octagon and was KO’d by Danny Roberts last time out (who Pereira actually knocked out spectacularly in his UFC debut).

If Pereira hasn’t learned from his past mistakes then Imadaev may well be able to just keep him at bay as best he can and let him tire himself out going through his bag of tricks, before capitalizing on his tiring opponent in the second-half of the fight. That might be the safer pick – after all, Pereira already has a good number of losses on his record – but nonetheless I’ll gamble that coming off back-to-back losses Pereira will focus more on actually winning the fight and his early offensive onslaught will earn him a TKO victory before he runs out of steam.

At first glance Eubanks record isn’t too impressive, having gone just 5-4 to date at 35-years-of-age, but in fairness to her, two of her losses came against good quality opposition early in her career in Kaitlyn Chookagian and Aspen Ladd, while Ladd has defeated her again since in the UFC.

Still, Eubanks did fight her way to the flyweight finals of TUF before weight issues forced her out of the competition and has had a few solid wins since during her 3-2 run in the UFC so far.

Rosa is 10 years her junior but actually has more experience courtesy of a 13-3 record, including a 2-0 start to her UFC run, but she’s not been facing the same level of competition that Eubanks has from pretty much day one of her MMA campaign.

I can see this being a fairly close fight, but on the feet Rosa will be the busier of the two offensively, while I think her BJJ is also good enough to not be overrun by Eubanks on the mat, and her superior cardio should help her to finish stronger and secure a decision victory.

Moises picked up the biggest win of his 13-4 career to date last time out when he finished Michael Johnson by submission, and now he moves on to face Turner, who like himself has overall gone 2-2 in the Octagon since joining from the Contender Series.

Turner is an abnormally lanky lightweight and will stand 6″ taller than Moises at 6ft 3″, while also having a 6.5″ reach advantage.

Turner utilizes that frame well and has finished all nine of his career victories inside the distance, with eight having come by way of strikes, but on the other hand he doesn’t have the best punch resistance himself and has vulnerabilities on the mat too.

Moises isn’t a particularly heavy hitter, but he is the more well-rounded of the two and though the size difference may make life tricky for him on the feet, he should be able to utilize his significant grappling here to get Turner down and secure a relative quick submission victory.

🤑 Who should you bet with for UFC Fight Night: Overeem vs. Sakai?

Our top rated and recommended bookmaker for UFC Fight Night: Overeem vs. Sakai is Sportsbet – JOIN HERE. Other top rated bookmakers include BetEasy, PlayUp, and SportsBetting.

💰 What are the best bets for UFC Fight Night: Overeem vs. Sakai?

To find out our best bets for the full UFC Fight Night: Overeem vs. Sakai fight card, read our latest UFC previews and betting tips!

📺 How can I watch UFC Fight Night: Overeem vs. Sakai in Australia?

👊 Which fights are on the card for UFC Fight Night: Overeem vs. Sakai?

Read our UFC Fight Night: Overeem vs. Sakai preview and bettings tips to find out all the fights and best bets on the card!