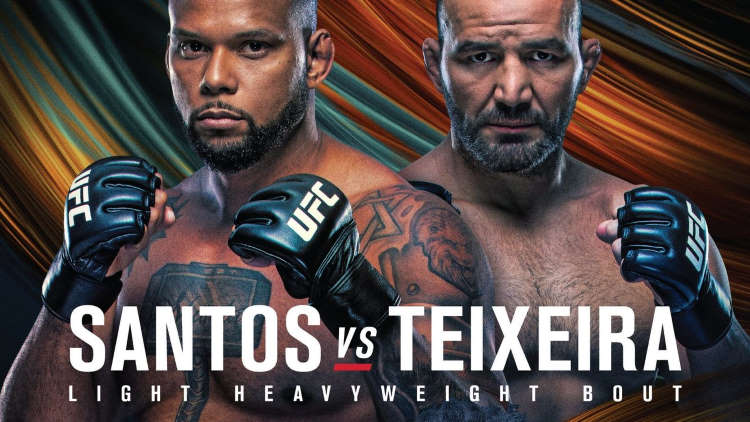 Santos may have lost out in his title fight with Jon Jones back in July of last year, but he gained a lot of stock regardless for taking the champ to a split decision verdict.

It came at a cost though as Santos suffered a torn LCL, PCL, MCL, meniscus and a cracked tibia in his left leg and a partially torn right ACL for good measure. That’s the reason for his long layoff since then and leaves questions as to how he will perform upon his return on Saturday night.

It’s particularly interesting given that part of what makes Santos striking hard to deal with is his excellent kicks and if that’s compromised in any way then it could have a significant impact in this fight.

Like Santos, Teixeira is a dangerous finisher on the feet with good power in his hands, but at 42, his chin isn’t quite what it once was and that led to a couple of losses due to strikes a few years ago – an unusual occurrence for a traditionally very durable fighter.

However, since then Teixeira has shown his savvy veteran skills by leaning more heavily on his strong wrestling and good submission game, which has taken him to four wins in a row.

That makes this an intriguingly balanced fight. If it remains upright then it’s competitive, but the younger, more explosive Santos could well have the edge if his prior injuries don’t take a toll on him. On the other hand, if Teixeira can get inside and work for takedowns then Santos has solid defense, but I suspect he would struggle to deal with him on the mat.

Teixiera may have to get through some rough moments early in the fight, but I do believe his ground game could be a big factor here and he’s smart enough to take advantage of that, so I’m going to take him to work his wrestling and then win by submission in the third round.

One of the true grizzled veterans of the heavyweight division, Arlovski continues to eek out the occasional victory in the Octagon, though he has lost four of his last seven outings, plus another ending in a no-contest.

Aside from a KO loss to Jairzinho Rozenstruik last year though, Alrovski has gone to a decision in nine out of his last 10 fights, which suggests that concerns about his chin holding up over the years didn’t materialize much as some had feared.

Part of the reason for that is the more cautious approach that Arlovski adopts these days, being quite content to use his years of experience, technical striking and solid cardio to try and eek out a decision win rather than going all out for a big KO finish that could also leave him vulnerable to being stopped himself.

Boser is an interesting opponent as he’s shown finishing power in his last two UFC outings, but like Arlovski is also well equipped to go the distance. He’ll give up marginal amounts of height and reach to Arlovski, but he’s 12-years the former champ’s junior and has good speed and movement, plus is likely to be putting extra sauce on his strikes.

As such I am leaning towards Boser to be able to compete favorably here as the fresher fighter and earn a decision victory.

This has all the making of a good, competitive scrap, with both fighters being well-matched and well-rounded.

Heinisch is most effective on his feet and keeps a good pace, while he’s also a respectable wrestler and makes up for not having water-tight takedown defense by showing a solid ability to get back upright.

Allen will have a 3″ height and reach advantage on the feet and has a solidly developing striking game that will help him hold his own standing, though he is quite hittable. His ground game is an obvious asset, being the better overall wrestler of the two here and he’ll also offer up a significant submission threat too.

It’s a fight that could go either way, but I think Allen can make this very competitive on the feet, while also picking his spots to land some key takedowns throughout the 15 minutes. I don’t think he’ll be able to tap Heinisch and may even struggle to keep him down for long, but in an otherwise close fight it may well help him sway the judges in his favor.

The No.4 ranked Gadelha is never far from sight of the strawweight title and is coming into this fight off of back-to-back wins, but the 8th placed Xiaonan has the bigger momentum here, having won all five of her fights in the UFC to date.

Gadelha’s ground game has always been her strongest suit, but she can strike too, which has made her a tough opponent for all but the best the division has to offer.

That being said, Gadelha can tend to fade as a fight goes on, which could be problematic against Xiaonan who pushes a high pace from start to finish on the feet and should have the striking advantage with her kickboxing.

Gadelha will give her takedown defense a stern test, but overall I think Xiaonon will be able to keep her on the end of her punches and make the most of her volume-based approach and better cardio to secure a victory on the scorecards.

Barcelos comes in on short notice for this fight with Taha, but having won all four of his UFC fights in a row he’ll still be feeling confident he can emerge victorious.

Both fighters are a finishing threat on the feet, but a key factor is that Barcelos is the more well-rounded fighter and should have a considerable advantage in terms of his wrestling and submission prowess.

Barcelos certainly will have to respect Taha’s striking, but I do feel that he is just the more skilled fighter wherever the action goes here and I see him being able to put his submission ability to good use and force a second round tap-out here.

Prediction: Raoni Barcelos to win by submission in Rd2.