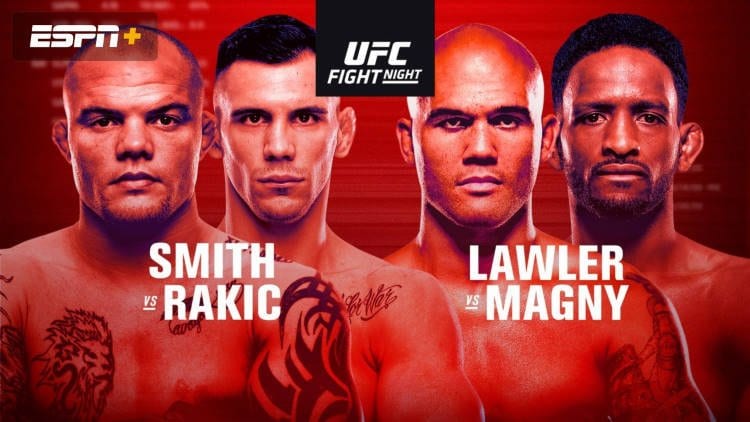 It’s somewhat surprising to see Smith back in the Octagon only three months after a tough fifth round TKO loss to Glover Teixeira that left him with a long list of injuries, including a broken orbital bone and nose in addition to also losing teeth!

This fight is unlikely to be a walk in the park either, as though Rakic lost his last fight by decision, he was on a 12-1 run before that, and like Smith is known for his dangerous striking, with nine of those dozen victories having come via strikes.

Rakic is very athletic, will have a 2″ reach advantage and is a big threat not only with punches but also with hard leg kicks and potentially fight ending head kicks too.

There’s a reason Smith fought for the 205lb title though as he too is a real handful to deal with offensively and does a good job of mixing in knees and elbows into his arsenal of strikes, while he’s also a submission threat on the mat if he can get it there – which wouldn’t be easy as his opponent has very good takedown defense.

With this much firepower on display anything could happen, but Smith’s quicker than expected return to action after such a damaging loss, not to mention all the other wars he’s been in over the course of his 48-fight career leave me feeling more comfortable picking the younger, fresher Rakic to TKO ‘Lionheart’ in the second round.

It’s been a year since we last saw Robbie Lawler, and the 38-year-old’s last outing against Colby Covington was a big disappointment as he just never really got going and looked like a shadow of the fearsome fighter who had made a rampant run as champion a few years earlier.

In total Lawler has now lost his last three fights and there is a concern that after all the wars he’s been in, including brutal fights with the likes of Rory MacDonald and Carlos Condit towards the tail end ofhis title reign, may now be taking their toll on him.

By way of contrast, Magny is in good form heading into this one and has stayed active, having looked excellent against Li Jingliang in March and then also earned a unanimous decision victory over Anthony Rocco Martin in June.

It’s perhaps a bit of a concern that Magny is now taking on his third fight in just six fights months, but there are solid reasons to like him in this match-up, not just because Lawler hasn’t been at his best of late, but also because Magny will have a 4″ height and 6″ reach advantage here and is good at maintaining his distance and staying active with strikes, while he also will pose a takedown threat too.

There’s no doubt Lawler has a major power advantage here though and a strong chin, so he may be willing to throw caution to the wind and march into range looking to land bigger blows of his own, and it certainly wouldn’t be a big surprise if he was able to put his opponent away here. In fact, if this was prime title-run Lawler then you’d expect that to happen.

However, Magny’s range management and size means he’ll be able to keep ‘Ruthless’ from really getting into the range he likes to operate in often, while taking a leaf out of Covington’s playbook, if he can keep his workrate high on the feet and threaten to use his wrestling it may well be enough to to diffuse a late-career Lawler and earn a unanimous decision victory.

Given that she’s not big even at strawweight, it’s an interesting move for Grasso to step up to flyweight for this encounter with Kim, who will be two inches taller and have 6″ in reach over her.

Grasso came into the UFC with a fair amount of hype behind her, but an underwhelming 3-3 run in the Octagon so far has poured cold water on that. She does remain a skilled technical striker though and her very good range management and movement will be crucial here to safely navigate the size disadvantage she’s facing.

Kim is actually a former bantamweight, but though she’s a solid striker and did earn a KO victory last time out, she’s generally not a heavy-hitter and her other four fights in the UFC to date have all gone to the scorecards – two of which she only narrowly emerged victorious in via split decision.

Traditionally Grasso falters when she’s being controlled on the mat, but that’s not Kim’s forte and I think overall Grasso is the better striker here and should be able to outland her opponent and earn a win on the scorecards here.

With Ryan Hall out, Bill Algeo comes in on short notice to make his UFC debut against veteran fighter Ricardo Lamas.

That seems like a tough first assignment for Algeo, and keep in mind he’s just two weeks removed from a decision victory in the CFFC promotion, so there have to be questions about whether he’s 100% fit and healthy or the fight.

Nevertheless, at 38-years-old, Lamas is a good few years removed from his prime and that’s showed in the fact that he’s only gone 1-3 in his last four outings, and that run has been book-ended by first round KO losses against Josh Emmett and Calvin Kattar.

Lamas has had a year out since then and still remains a well-rounded fighter who is a strong grappler, but can also get the job done on the feet too. Algeo isn’t particularly heavy-handed and though he has some submissions on his record I don’t see him being the first man to finish Lamas in that fashion, so overall I’m going with Lamas to get back to winning ways via decision here.

The last fight between these two was a strange one, with Cutelaba appearing to be hurt early in the fight, which led to a swift stoppage from the referee, only for Cutelaba to bounce back up still looking fresh while protesting furiously that he was fine and had just been trying to lure Ankalaev into a trap by pretending he was rocked.

Whether you believe that or not, it’s interesting that it was Ankalaev who was bringing the fight to Cutelaba in a big way early on the feet, despite that typically being where his opponent excels. Cutelaba is usually an aggressive starter and channels all his energy into throwing thunderous power punches and elbows on the feet or mat as he looks for an early stoppage.

The problem for Cutelaba has typically been that if he doesn’t succeed in getting the finish he’s looking for then he quickly fades and that’s a real problem here as Ankalaev has already shown he can deal with the early pressure, plus he’s a more measured, technical striker with dangerous kicks, while he’s also a strong wrestler who should have a big cardio advantage the longer the fight goes on.

As such I favor Ankalaev to win here, but I think this time he’ll have to go deeper into the fight to get the TKO stoppage against his tiring opponent.

🤑 Who should you bet with for UFC Fight Night: Smith vs. Rakić?

Our top rated and recommended bookmaker for UFC Fight Night: Smith vs. Rakić is Sportsbet – JOIN HERE. Other top rated bookmakers include BetEasy, PlayUp, and SportsBetting.

💰 What are the best bets for UFC Fight Night: Smith vs. Rakić?

To find out our best bets for the full UFC Fight Night: Smith vs. Rakić fight card, read our latest UFC previews and betting tips!

📺 How can I watch UFC Fight Night: Smith vs. Rakić in Australia?

👊 Which fights are on the card for UFC Fight Night: Smith vs. Rakić?

Read our UFC Fight Night: Smith vs. Rakić preview and bettings tips to find out all the fights and best bets on the card!