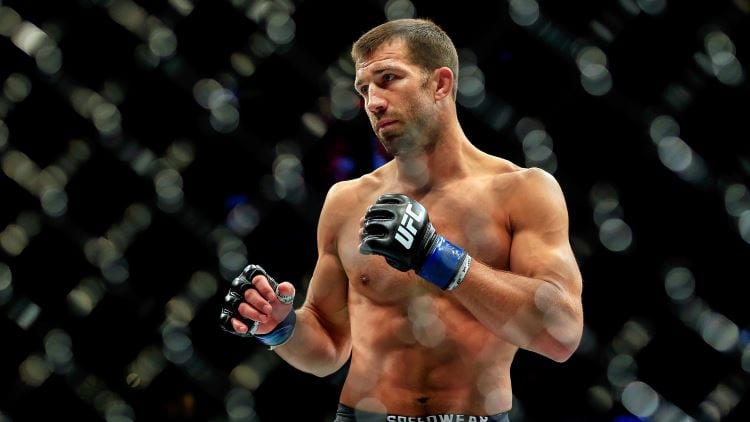 The main event in Perth sees Yoel Romero stepping in on four weeks notice to replace injured middleweight champion Robert Whittaker against Luke Rockhold in a fight for the interim title.

It’s an intriguing fight, wherever it’s contested.  On the feet, Rockhold excels at range with a strong arsenal of kicks and solid punches, and he’ll generally rely more on consistent offence and potent combinations to finish opponents rather than just one-punch knockout power.

Despite being 40-years-old, Romero is still a physical specimen, and it’s not just for show as he covers ground remarkably fast for his size and can launch into fight-ending hooks and flying knees in the blink of an eye.

What makes him especially dangerous is that he can almost go dormant at times in his fights, which makes it all the more shocking when he does suddenly burst to life, as proven by the fact he has numerous third round finishes in the UFC.

Romero is of course also an exceptional wrestler, though it’s not something he’s overly reliant on.  That being said, if he wants to get an opponent down he almost certainly can, and his punching power makes him dangerous on top.

Rockhold is a very well-rounded fighter though, and whether it’s working from the clinch, looking for takedowns and controlling the action on top,, or initiating scrambles and submission attempts, he operates at a high level, and has ended the majority of his victories via tapping out his opponents.

Overall I favor Rockhold here as he’ll use his superior cardio to push the pace, provide a more consistent offensive output and will be able to handle himself on the mat.  He’ll need to be careful though, as Romero is dangerous even in the later rounds when he’s tired, but nevertheless I think a submission for the former champion is a possibility here, though I’ll settle on a decision victory.

Heavyweight star Mark Hunt has been out of action since June of last year, largely due to the UFC’s decision to temporarily suspend him after controversial remarks in which he claimed to be suffering from symptoms of brain damage – something that thankfully medical tests have since not been able to substantiate.

However, at 43-years-old, time is catching up to Hunt and over the past few years his once-granite chin has been cracked on a few occasions.  That being said, he’s still able to absorb a lot of punishment and on the other end of the equation he can certainly still dish it out too, with his own punching power showing no signs of diminishing yet.

At 26-years-old, Blaydes is 17 years Hunt’s junior, but despite that youth advantage he’ll be in no doubt as to how dangerous his opponent can be and would be wise to attempt to utilize his wrestling advantage to remove that offensive threat and wear out the ‘The Super Samoan’ with ground and pound.

Blaydes does like to mix things up though and can overcommit to striking at times, even when it’s against his best interests, so it’s quite possible he’ll get lured into a stand-up battle with Hunt, and I think that will prove to be his downfall as the heavy-hitter notches up another walk-off KO inside of 10 minutes.

One of a number of Australian fighters on the UFC 221 main card, Tai Tuivasa made a big impression in his Octagon debut back in November when he registered a first round knockout via a flying knee.

Quick finishes are nothing new for the 24-year-old, who now has six first round finishes in his six professional bouts, demonstrating that he can mix up punches, knees and elbows to devastating effect.

There are defensive holes in his striking game though and cardio is a question mark for the 265lber given his lack of experience beyond the first five minutes, and tendency to load up on every strike.

As for Asker, his wrestling game could well prove to be a big problem for a striker like Tuivasa, but he has shown a vulnerability to being finished by big punchers in the past, and I suspect that’s going to be the case again here, with Tuivasa getting the early finish in front of his home fans.

Jake Matthews continues to show promise at 23 years of age, but though he has a fairly decent foundation of striking, wrestling and BJJ to build from, he’s still something of a work in progress from a technical perspective and relies on his athleticism to make up the difference.

This is a challenging match-up for him as Jingliang is riding high on confidence after four victories in a row inside the Octagon, including three finishes due to strikes.

Jingliang is an active offensive striker who will put Matthews under real pressure from the opening bell, hits hard and doesn’t let fighters off the hook when he has them hurt, though on the downside he can leave his chin exposed.

Jingliang can also be effective from the clinch and hold his own on the mat too, so overall I lean towards ‘The Leech’ here to keep his winning streak alive via strikes inside the distance.

Australia’s own Tyson Pedro opens up the main card opposite Saperbek Safarov, with both men looking to bounce back from a loss last time out.

Safarov is very much a brawler, who will be hoping to slug it out with Pedro on the feet rather than go anywhere near the mat.

However, look for the home favorite to utilize his more well-rounded skills to slip under the strikes and secure takedowns, which will open up the potential for a submission finish.

Betting tip: Tyson Pedro wins by submission in the first round @ $6.50 – BET NOW