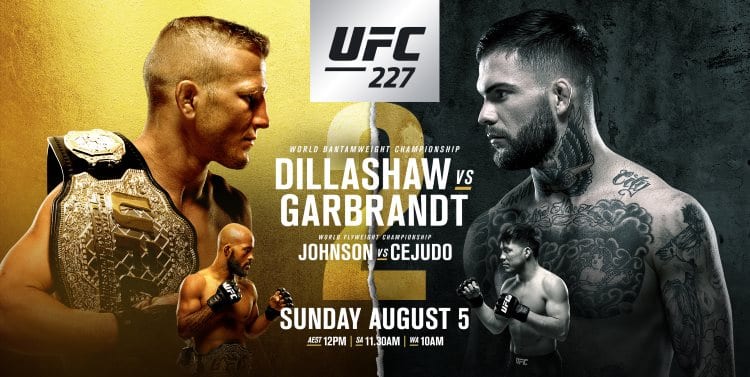 The first meeting between these two elite bantamweights showed that they are both capable of posing problems for each other, and while Dillashaw emerged victorious by way of TKO on that occasion, there’s all to play for in their second encounter.

Of the two Garbrandt undoubtedly has the bigger power and he’s also the better boxer and posseses lightning-quick hand speed.  On the other hand, Dillashaw has a stronger kicking game and is generally more versatile offensively, in addition to having excellent cardio.

Dillashaw also has the grappling advantage here, but Garbrandt’s takedown defense is excellent and as such I think this one is more likely to play out on the feet for the most part.

These really are two terrific fighters, making this an extremely close fight to call, but I slightly favor Garbrandt.  Dillashaw may have the more complete game, but I think Garbrandt’s punching power and speed will enable him to find the champion’s chin cleanly and put him in trouble, leading to a second round TKO stoppage to reclaim the title.

Two years ago ‘Mighty Mouse’ claimed a first round finish over Cejudo, but since then the former Olympic wrestling gold medalist has been continuing to make marked improvements to his MMA game and is now looking to have a second crack at taking the belt from the dominant champion.

Cejudo’s wrestling was already at an elite level, so the real work since their last fight has come in his striking, and he’s a quick learner now looks far more comfortable, confident and effective, as shown by TKO’ing Wilson Reis in September of last year – his first finish in the UFC.

Nevertheless, he’s still fighting arguably the most complete mixed martial artist of all time in Johnson and so despite ticking a lot of the boxes you’d want for a fighter that could give ‘Mighty Mouse’ a real challenge in the Octagon, it’s hard to shake the feeling he’s still going to struggle to get the job done.

There’s just so few signs of holes in Johnson’s game, and he blends all facets of fighting together so seamlessly and intelligently that two years just doesn’t seem enough time to catch up, but I expect him to make a better fight of it than last time around, with Johnson eventually emerging victorious via a fourth round TKO.

Coming in off back-to-back losses, UFC veteran now looks to get back on track against a rising force at bantamweight, Miocano.

Swanson perhaps isn’t quite the fighter he once was, but he’s still a talented kickboxer, who can give all the but the top-level talents a run for their money.  However, though he’s a grappler first and foremost, Moicano has gone on to prove that he’s a well-rounded fighter by developing his own stand-up game, and that’ll make this a competitive fight on the feet.

Beyond that, Moicano also have an ace up his sleeve with his Brazilian Jiu-Jitsu, and submissions have always been a weakness for Swanson, so that’s a real concern for him here.

I think Moicano will be able to put up a respectable showing against Swanson trading strikes, but I do think he’ll be effective with takedowns too and that will also lead to potential submission opportunities, resulting in either a late stoppage or decision victory for the Brazilian.

This is very much a striker vs. grappler affair, with Viana being a force to be reckoned with on the mat, while Aldrich is a technical, if not particularly powerful stand-up fighter.

If Aldrich can keep this fight standing then she certainly has a chance as Viana’s own striking is rather raw at this stage, but she’s at a significant disadvantage if the fight goes to ground and given that Viana has a habit of emerging with first round submissions finishes I think another is on the cards on Saturday night.

With barely more than a week to get ready, former Dana White Contender Series graduate Holland has been launched into a tough fight with the explosive Santos.

Holland shouldn’t just be discounted immediately though as he’s a proven finisher both on the feet and on the mat, and Santos’ aggressive style can leave him open to getting caught by someone with finishing power.

However, Holland is taking a big step up here and Santos is a monster on the offensive with his kicks in particular being of the thunderous variety and I think that will prove to be a shock to the system for the newcomer, leading to a first round TKO stoppage. 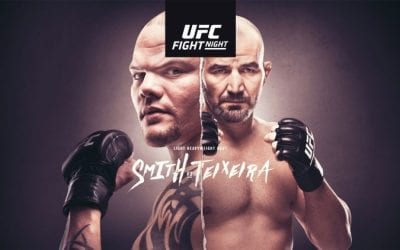