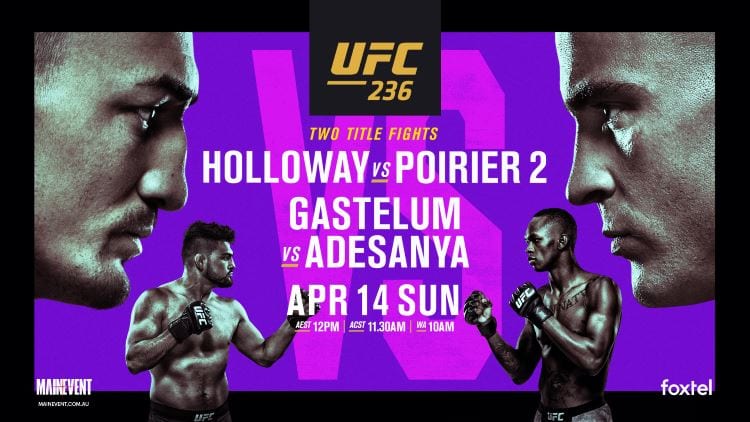 What a great fight this is as the UFC’s dominant featherweight champion Holloway takes a step up to lightweight to challenge Poirier for the interim title.

These two have past history, although perhaps it would be best not to read too much into Poirier’s first round submission victory given that it was seven years ago, marked Holloway’s UFC debut and in actual fact was also his first fight at featherweight too.

It does however serve as a reminder that Poirier is a very well-rounded mixed martial artist who transitions smoothly between striking and grappling, and can threaten with submission if required, but he relishes the stand-up game and these days Holloway’s excellent takedown defense should lead to that being the main focus of the fight.

That should lead to some thrilling action as Holloway is a brilliant technician on the feet, particularly with his cultured boxing, with great timing, accuracy combination striking and distance management taking him to a level that is hard to match in MMA, while he’s also got a stellar chin to go with it.

Poirier is a talented striker in his own right and has shown more finishing power since moving up to lightweight, while he pushes a hard pace and has the killer instinct with swift strikes once he has an opponent hurt.

‘The Diamond’ can get drawn into unnecessary brawls at times though and his chin hasn’t always held up at times when he’s needed it, so that will be somewhat of a concern here, particularly as Holloway should have more firepower himself with the move up in weight.

I see this being a thriller between two terrific talents, but as good as Poirier is, Holloway still remains the sharper, craftier, more gifted striker, can match his pace and take more punishment, leading to a third round TKO stoppage for ‘Blessed’ and likely set up other mouth-watering fights at 155lbs.

The interim middleweight title is up for grabs when these two middleweights clash in the co-main event, with Gastelum having gone through former champion Michael Bisping and Ronaldo ‘Jacare’ Souza to get to this point, while Adesanya has been somewhat fast-tracked after wins over the likes of Derek Brunson and an ageing Anderson Silva.

Physically and stylistically these two are significantly different from each other, albeit they both prefer to engage on the feet.

Adesanya will enjoy a whopping 7” height and 8.5” reach advantage over the short, stocky former welterweight Gastelum and he’s well equipped to keep his opponent at bay with his strong kickboxing game that includes a creative selection of accurate, eye-catching kicks alongside his punches.

Gastelum on the other hand needs to get inside to be effective and relies a lot on natural abilities like his speed and power to make an impact, rather than having the same level of ringcraft and refined technique as his opponent.

Gastelum does have a wrestling advantage here though and it would be interesting to see how that matches up with Adesanya’s improving, but still not fully tested takedown defense and all-round ground game.

Nevertheless, I think Adesanya will dictate the distance here and make it very difficult for Gastelum to get in on him, with unpredictable and accurate striking making it a big risk for his opponent to just rush in. Gastelum is a tough customer though, so I think Adesanya will have to outstrike him for the full five rounds to win the belt.

Anders and Rountree both have talent but are still fairly underdeveloped fighters at this point in their careers.

Anders has the kind of attributes you’d expect from a former college football player turned fighter, possessing good athleticism, power and decent wrestling, but while he shows promise he’s still fairly raw and has come up short against more established UFC light-heavyweights.

As for Rountree, he’s a hard-hitting striker with genuine knockout power, but his lack of other skills to complement that limits his chances of progressing beyond a certain point in the division.

Nevertheless, this is a fight in which Rountree could emerge victorious as Anders won’t necessarily scare him on the feet, but ‘Ya Boy’ is a tough customer who can take advantage of his opponent’s lack of a ground game and cardio to earn a third round ground and pound TKO stoppage.

It’s been over a year since Jouban was last seen in the Octagon due to a neck injury and now he returns to face a fighter in Grant who is undertaking his third UFC fight in the space of just a few months.

These two are both strikers through and through, with Jouban being the considerably more active and offensive of the two, but while Grant is more cautious and has solid defense, he also lands strikes with authority when he does engage.

Jouban’s layoff leaves some element of doubt in terms of a prediction here, but he’s the more experienced fighter, especially against higher level opposition and should be pressing the action and offering the greater output of the two here.

As such I think he is a skilled enough striker to navigate his way to decision victory here.

The main card opens up with a 205lb encounter between the inconsistent but not to be underestimated OSP and the all-action Krylov.

These two actually fought five years ago, where Krylov fell victim to what would later go on to be named the ‘Von Preux’ choke after just 89 seconds of fighting.

Krylov will be hoping to make a better stab at it this time around, and with his high-octane, insanely aggressive striking he could trouble OSP, who tends to operate at a much slower pace.

However, Krylov does also like to go to ground too in search of a finish without taking the time to think through whether that’s such a good idea, and that could prove to be a big mistake as Saint Preux is the better wrestler and has that submission threat, which I think will lead to him getting tapped out again.