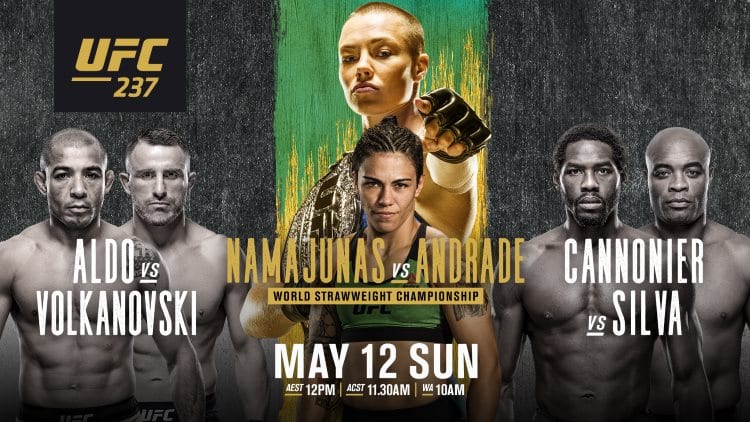 Andrade has none of her previous opponent’s slick striking, but what she does have his major punching power, backed up by relentless aggression and a granite chin.

Namajunas does have the tools to deal with that that these days though.  She’s not as reckless as she once was and can now work effectively from range with good footwork and crisp striking, which will serve her well here.

Andrade also has dangerous takedowns though, replacing slick technique with raw power, and it works well with her combustible style and could spell danger for Namajunas, who is not nearly as strong and has had issues with wrestling in the past.

That being said, Namajunas submission prowess is well documented and her crafty, opportunistic approach could lead to opportunities here as Andrade has been vulnerable to being tapped before.

There’s no guarantees what’s going to happen here. Andrade could absolutely impose her will and strength in this match-up with the home crowd behind her to emerge victorious, but Namajunas deserves enormous credit for how she handled the fights with Jedrzeczjyk, and with her continued development and confidence I’ll take her to outstrike the Brazilian on the outside to emerge victorious via decision.

Despite the fact he’s now 44 and has had a rough run of results over the past few years, Silva didn’t actually look all that bad last time out against a much younger lion in Israel Adesanya.

With that in mind, the 35-year-old Cannonier, who has only compiled a 4-4 run in the UFC and been stopped by strikes twice in the first round, isn’t a terrible opponent for Silva.

The former heavyweight is dangerous though, bringing power and physicality to the match-up that could well trouble ‘The Spider.’

Even at this stage in his career Silva still has some creative tricks up his sleeve in the striking department and he could , but his reactions aren’t what they once were, so relying on that for defensive purposes against a heavy-hitter is a real concern.

Nevertheless, Cannonier is a limited striker, more of a brawler than anything, and I still think that’s the kind of opponent that the vastly more technical Silva still has a chance to get the better of, and I’ll take him to earn a decision victory here.

This should an interesting one as Volkanovski has been very impressive so far during his UFC run, while Aldo is still a top flight featherweight fighter despite coming up short against Max Holloway on two occasions.

Volkanovski defeated Chad Mendes last time out and that’s actually who he is most reminiscent of, possessing powerful wrestling and good boxing, and he’ll look to use those assets to be aggressive and put Aldo under pressure.

Of course, we know that Aldo handled a prime Mendes twice in his career, so that bodes well from him here, although he should be mindful that Volkanovski had a six inch reach advantage over ‘Money,’ and has appeared to be very durable so far in his career.

Still, Aldo only has to fight three rounds here, and that suits him a lot better as he tends to waver a little in the championship rounds and has to pace himself more.

That shouldn’t be the case here, so I expect to see Aldo in good form, looking sharp and using his supremely technical boxing, footwork and counter-striking precision to get the better of the game Volkanovski on the feet and show solid takedown defense into the bargain en-route to a win on the scorecards.

Alves is getting on in years now, but though he’s at the tail end of his career, the 35-year-old still not somebody to be underestimated.

Alves still has his powerful leg kick attacks and will be looking to chop down the much taller Staropoli, while his striking combinations are potent, though on the downside he’s not as durable as he once was.

Staropoli lacks Alves technical ability, but he’s a tough, high volume brawler and at 26, he has far less miles on the clock.

It’s hard to say for sure how this one is going to go, particularly since Staropoli isn’t well tested at this level of competition.  His aggression could pay dividends against an ageing Alves though, putting him on the back foot and testing his chin.  Alves might get hurt in the process, but I think Staropoli’s high output will also bode well for him on the judges’ scorecards.

Two Brazilian’s who have compiled strong records in the UFC with little fanfare clash here in what looks to be a fairly evenly matched bout.

At 40 years of age you’d think Trinaldo would be starting to show signs of slowing down, but while he has picked up the occasional loss in recent times, but he’s physically strong and there’s still plenty of life left in him for now.

Trinaldo might have a slight power advantage here, but the striking exchanges should be competitive and I think Ferreira might actually have the edge overall and will be helped along with a 4” reach advantage.

While he’s more enamoured with striking these days, Trinaldo also has a good wrestling base too, but Ferreira’s takedown defense is solid and he’s a threat from submissions too.

I expect this fight to be closely contested everywhere at a high tempo and based on his recent form I favor Ferreira to do enough to emerge with his hand raised.