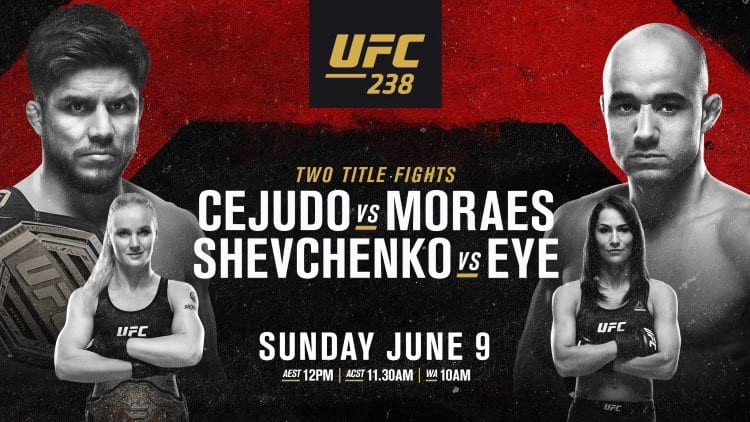 Defeating both Demetrious Johnson and TJ Dillashaw at flyweight is a hugely impressive feather in Cejudo’s cap, and now he’ll look to prove he can be just as effective at bantamweight when he fights for the vacant title on Saturday night.

Those fights showed that in his early 30’s, Cejudo is continuing to develop and improve his all-round skills as an MMA fighter.  Of course he’s still got his olympic-gold medal-winning wrestling base, but his stand-up has come a long way too.

That being said, he’s now facing a formidable offensive striker in Moraes, who was been finishing high-caliber 135lb’ers with apparent ease in recent times with his explosive muay thai style that makes very good use of kicks, but with his punches and knees also being capable of landing knockout blows.

Therefore Cejudo would be wise to use his wrestling early and often here, though it’ll be interesting to see how he copes with that after moving up a division, especially with Moraes not being an easy target to track down, and also being no slouch on the mat.

Cejudo will be at a height and reach disadvantage here and as he looks to push the pace I think he’s going to be vulnerable to being caught by Moraes, who is very good on the counter, is the more skilled technician and has the killer instinct to put away the smaller man sooner rather than later.

Eye has had somewhat of a reversal in fortunes since dropping down to 125lbs, wiping away a four-fight losing run and embarking on a three-fight unbeaten run that’s earned her a title shot.

That partly suggests this is a better weight class for Eye, but also suggests there’s not yet a great deal of strength-in-depth in this new division.

That being said, at the top of the tree, Shevchenko is a formidable opponent, being a well-versed striker who can also make her impression felt on the mat – more so than ever at this weight as she was always a little undersized for 135lbs.

I don’t see any real reason to pick against Shevchenko here.  Eye is capable boxer and can wrestle too, but I don’t think she does either better than the champion and isn’t as strategically sound and as strong as ‘Bullet’ either, so potentially a finish on the mat is on the cards, but given Eye’s toughness I’ll take Shevchenko to win by decision.

A few months ago when news of Tony Ferguson’s troubling mental health issues emerged via his wife it didn’t seem like he’d be back in the Octagon any time soon, yet here we are.

It’s impossible to say how that might have effected his training camp and how he’ll be in the cage on Saturday night, but what we do know is that he is a formidable fighter, whose relentlessly offensive, pressure-heavy style of fighting could be a real problem for Cerrone.

That being said, Ferguson isn’t quick off the blocks and tends to warm up as the fight goes on and get more and more difficult to deal with, though to be fair Cerrone is renowned as a slow starter too, so he might not be in a position to capitalize on that.

Cerrone is a great striker in his own right though and we’ve seen Ferguson floored several times in the past, so ‘Cowboy’s’ punches, kicks and knees will all provide a series threat to ‘El Cucuy’s’ unbeaten run.

Ferguson is as tough as they come though and has always shown great powers of recovery when hurt.  He is a versatile and endlessly creative striker, plus he works well to the body, which has always been somewhat of a weakness for Cerrone.

Both men are also very capable on the mat.  Cerrone is the better wrestler and has always been dangerous with submissions, but Ferguson is very crafty too and like ‘Cowboy’ is a proven finisher, so it’s going to be close wherever the fight goes.

Ferguson’s mental health problems and tendency to get caught at some stage in his fights are concerns in this fight, but I think his all-action, high-volume style, body work and pressure are going to throw Cerrone off his game and lead to a third round TKO stoppage here in what should be a thrilling fight.

Two talented bantamweights on show here, but it’s Yan that has the momentum heading into the match-up, with four wins in a row to his name so far, while Rivera’s own long unbeaten stretch has come undone in recent times with losses in two of his last three fights.

Yan is an aggressive pressure striker who will certainly be offering up the higher output on the feet on Saturday night, but he’s also sound defensively too.

He’ll need to be as Rivera is an effective counter-striker and will be looking to retaliate as Yan attempts to impose his will on this fight.

Rivera’s never been a huge hitter though and I think Yan’s volume and heavier hands will be hard for him to deal with, giving the Russian the edge that will earn him a unanimous decision victory.

Heavyweight action opens up the main card and it’s an interesting fight that could go either way.

Tuivasa might not look like much of an athletic specimen, but he’s actually surprisingly agile and fast for his size, and of course he hits very hard indeed and is fearless.

The Aussie has demonstrated an underdeveloped ground game though and that’s a weakness Ivanov has the skills to exploit and could look to finish via either ground and pound or submission.

Ivanov is also a tough customer who has never been finished, so he can hold his own on the feet to an extent, but it would be risky to hang out there for too long.

I’m leaning towards Ivanov here as I really believe his ground game could snuff out Tuivasa’s threat, but it is concerning that the Bulgarian doesn’t use it as much as he should as I don’t think he’ll win the stand-up battle.