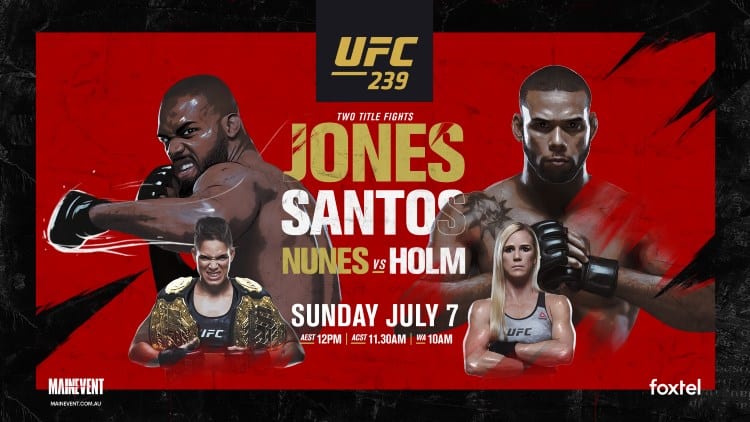 Having finished all three of his 205lb fights to date via strikes, former middleweight Santos’ dangerous stand-up game makes him a fun opponent for Jones this weekend.

Santos has a strong kicking game and his punches behind that are proven fight-finishers, but he will be operating at a 2” height and 8.5” reach disadvantage, which is going to be hard to navigate around.

Jones uses his reach advantage to full effect and works very well from range, while his clinch game is also on point and his wrestling gives him a strong ‘plan B’ if things aren’t going his way on the feet.

Santos’s aggression and offensive threats will have to be respected by Jones, but I think he’s just simply too good and too technical at this stage in his career to be caught out by the Brazilian brawler and he’ll dictate the action on the feet from range and eventually stop him with ground and pound in the third.

Nunes is a terrific striker and can be absolutely ruthless on the attack, but against Holm the big issue will be managing to keep her in one place long enough to unleash her venomous offence as ‘The Preacher’s Daughter’ will present a fast and constantly moving target.

That may well frustrate Nunes and it will also tire her out, which could be an issue as she’s had cardio issues in the past, whereas Holm never seems to tire from the first to the fifth round.

Holm has flaws though.  She has a bad tendency to throw a lot of strikes that don’t come close to connecting – meaningless busy work that can be frustrating to watch as she is skilled and with her kicks in particular she possesses knockout power when she’s willing to actually commit to getting into range to land it.

Holm is also not the best on the mat and Nunes is just as much of a finisher there as she is on the feet, which opens up another route to victory for her.

The later the fight goes the more it favours Holm due to her gas tank, but I’m going to stick with the champion here.  She’s a natural predator and has no shortage of technical ability, so I think she’ll be able to hunt Holm down and hurt her with big strikes, before taking her down and tapping her out by submission.

The one certainty in this fight is that if it stays standing then Askren is in deep trouble.

Masvidal is a class act on the feet with his finely tuned boxing, although he will have to forgo his natural counter-punching style against Askren, who won’t be in a hurry to trade blows with him.

Obviously Askren’s gameplan will be to use his stellar wrestling early and often as he always does, and it’s going to be hard to stop him from having his way and controlling Masvidal on the mat.

That being said, Masvidal is well rounded and is a crafty veteran on the floor who will look for submissions or take opportunities to get back to his feet and get back to striking if they are presented to him.

Masvidal has a real chance to hurt Askren here on the feet and while there’s every chance that his opponent does manage to bring him down and stifle him for three rounds, I’m going to pick ‘Gamebred’ to create enough striking opportunities to punish ‘Funky’ and claim a TKO victory.

Former middleweight champion Rockhold has only fought three times in as many years and lost twice, leading to his decision to reinvent himself as a light-heavyweight in 2019.

Rockhold certainly has the talent to make an impression in the division. He’s a well-rounded, athletic fighter with good striking and particularly effective kicks, who also can operate well in the clinch and is a very talented grappler too.

Rockhold can be hittable though and his chin has taken punishment, so Blachowicz will look to implement his boxing game and he is a solid grappler in his own right.

I expect Rockhold to wear the extra weight well, but I don’t think he’ll have it all his way against Blachowicz, who will make things somewhat competitive on the feet or the mat, but ultimately it’ll be the former middleweight who does enough to secure a decision victory.

It’s interesting to think how Sanchez’s career might have played out if he’d focused on his grappling ability rather than being one of the UFC’s best known blood-soaked brawlers.

Aside from his huge heart, chin (admittedly no longer what it once was) and cardio, it’s Sanchez’s ground game that’s always been his best asset and thankfully at this very late stage in his career he seems to have realized that.

That makes for an interesting fight against Chiesa, who is pretty limited as a striker and doesn’t really have the power to trouble Sanchez, but is a hard working, grinding grappler with a good submission game and solid cardio.

Welterweight isn’t the best division for Sanchez to be operating in, but I actually still lean towards him here.  He’s very good on the mat and with his scrambling ability, submission defence and energy reserves I don’t see Chiesa being able to control the fight the way he’ll be hoping to.

Instead, Sanchez will have the better moments on the feet and work ground and pound on the mat to get the nod from the judges.