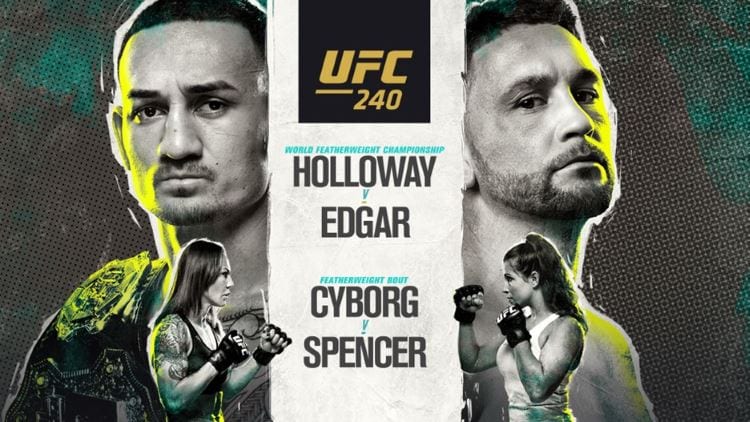 Holloway may have come undone in his lightweight debut against Dustin Poirier, but back at featherweight he still rules the division with an iron fist.

Even at 37, Edgar remains a worthy challenger, but he has his work cut out for him.  Edgar typically troubles his opponent’s by keeping a high pace and utilizing distance and speed effectively to dart in and out of range landing shots that might not be particularly devastating, but can soon rack up and help win round after round.

However, Holloway, who is ten years his junior, is also a high-tempo striker who won’t break, has a high volume of strikes, fast hands and is a master of range management.  He’s certainly the harder hitter of the two and his laser accuracy and speed means that it’s likely that he’ll catch out even a quick and crafty customer like Edgar as he moves into range.

Edgar does also have very good grappling skills to fall back on, but these days he’s more content to strike and Holloway has excellent takedown defence.

We’ve seen Edgar be hurt and then come back in the past, but at this stage in his career and against this calibre of opposition I think we’ll see him rocked and then stopped here by Holloway in the third round.

Cyborg’s long unbeaten run finally came to an end last time out against the seemingly unstoppable phenom that is Amanda Nunes, but there’s no doubt she’s still a nightmare opponent for pretty much everybody else.

For her next fight Cyborg faces an undefeated fighter in Spencer, who has spent the vast majority of her 7-0 run in Invicta FC and brings good grappling to the Octagon and a record filled with submission finishes, not to mention the fact she is a natural featherweight rather than a beefed up bantamweight.

On the feet Spencer is nothing special and certainly doesn’t have Nunes’ punching power, so if ‘Cyborg’ can use her takedown defense and strength to keep this one standing then she should be able to boss the stand-up action as she’s been accustomed to doing for so many years.

As with some other of her opponents in the past, I don’t expect that Spencer will have come up against anybody who hits with the same power and intensity as Cyborg and will wilt under a barrage of strikes for a TKO stoppage inside of two rounds.

Neal is a Contender Series recruit who has so far exceeded expectations with a solid three fight winning streak in the UFC to date.

Neal has proven to be an astute striker who has the power to end fights, but isn’t reckless in his approach and can fight at a measured pace and with a variety of techniques, while he’s difficult to take down too and is continuing to round out his skill-set.

Price is a proven finisher with big power in his hands and he’ll be looking to take the fight to Neal and put him away whenever the opportunity presents itself, either on the feet or the mat.

This is a good challenge for Neal as Price is a dangerous striker who could make life uncomfortable for him, but he appears to be calm under pressure and I think his more careful, calculated stand-up will allow him to pinpoint his opponent’s defensive weaknesses and lead him to win by decision here.

Despite losing his UFC debut, the 22-year-old Tsarukyan acquitted himself well and looks like he could be a fighter to watch, but this will be a good test to see just how good he is at this moment in time.

Aubin-Mercier is primarily a grappler and a good one at that, with his judo ability being an extra feather in his cap in that regard, while his striking has improved over time, though it’s not likely to cause his opponent many sleepless nights leading up to this fight.

The evidence so far suggests that even at his young age Tsarukyan is a surprisingly well-rounded fighter.  I think he could well have the striking edge in this fight, but his wrestling is also strong and looks like he could hold his own against Aubin-Mercier here.

It’s risky picking Tsarukyan because he’s still young and hasn’t had many big tests yet and Aubin-Mercier is not an easy fighter to go looking for your first UFC win against, but I’m still picking him to hold his own in the grappling exchanges and win the striking battle to emerge with a decision victory.

Barriault is a fun fighter who has a lot of power in his hands and is built tough, but he’s not particularly well-rounded.

Jotko definitely has more strings to his bow, and while he’ll concede the power advantage to Barriault, he can make up for that with a strong clinch game and superior grappling ability.

Jotko has been caught in the past in fights he could otherwise have won, so Barriult will fancy his chances of doing likewise, but I favour Jotko to press home his grappling advantages, land some solid ground and pound and emerge with a decision win.