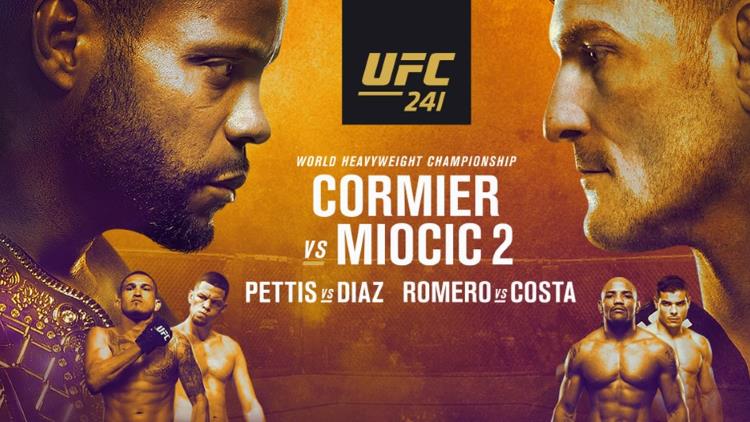 The last time these two met the action was over surprisingly quickly, with Cormier knocking out Miocic inside of a round to claim the heavyweight title.

Despite the outcome of the last fight it still remains a very interesting match-up and things could well play out differently this time around.

Miocic will still enjoy a 7.5” reach advantage and his boxing has always been one of his best assets.  He’d be wise to make more use of it this time around as last time out he got caught from a clinch position and that is a favoured spot for Cormier, who has found success wearing down opponents against the cage in the past.

Cormier is of course also a world-class wrestler, but Miocic showed signs last time out that his own size, strength and wrestling ability might be able to make life difficult for ‘DC’.

So it remains as intriguingly balanced a fight as it was the last time around, and the fact that Cormier has been dropping more and more hints about retirement recently, plus is coming off back surgery does give pause for thought.

With that in mind I’m leaning ever so slightly towards Miocic this time around to win the striking battle from range and not be overpowered in the wrestling department, leading to a third round TKO victory.

It’s been three years since Diaz last set foot in the Octagon, while Pettis has been far more active, but has been through several wars and experienced mixed results.

That’s one of the many puzzling dynamics in this fight, as is the fact that they are fighting at 170lbs.  Pettis did catch Stephen Thompson off-guard to spectacular effect in his divisional debut, but there’s still question marks about whether this is really the best division for him.  Diaz has generally performed better at lightweight too, but he’s bigger and more physically suited to 170lbs and will also be working with a 2” height and 3.5” reach advantage.

That being said, Diaz has always been a target for leg kicks and Pettis will gladly chop away at his lead leg throughout the fight and will generally be the quicker fighter with the more creative striking of the two.

Diaz is as tough as nails though and he’ll use his boxing and reach to put together a high volume of punches.

It’ll also be an interesting fight if it goes to the mat, though even if Pettis is crafty, Diaz feels like the more dangerous, seasoned jiu-jitsu player of the two.  That being said, unless one has hurt the other it seems unlikely they will disengage from the striking battle here.

It’s not an easy fight to pick, but even though his long layoff is a big concern I’d still expect Diaz to turn up in good shape, be the more durable fighter and putting together a high offensive output from range that will throw Pettis off his own striking game enough to edge out a decision victory.

Another major fight here, this time at middleweight as two of the most physically imposing physical specimens on the UFC roster collide.

The undefeated Costa has been absolutely dominant in his career to date, notching up 11 stoppages due to strikes from 12 career victories, and the kind of pace, pressure and power that he possesses is very hard to deal with.

However, Costa’s biggest wins have come over the likes of Uriah Hall and a faded Johny Hendricks, so this will be by far his biggest test, and against another absolute monster who is remarkably quick, explosive and strong and won’t be outmuscled.

Romero may not fight at the same pace, but he wields big power, has been tested in longer lasting fights than his opponent and also has a major wrestling advantage – though he often chooses not to use it.

The fact that Romero is 42 is a concern, going up against a much younger lion in the 28-year-old Costa, but he’s such a freak of nature that I don’t hold that against him and his ability to counter his opponent’s striking aggression with takedowns and swift bursts of violence, together with his knack for finding late finishes will ultimately pay dividends here with a third round TKO stoppage.

An interesting stylistic clash here between two in-form fighters, with Benitez being the better grappler of the two, but Yusuff having the power, strength and athleticism to give him serious problems on the feet.

Benitez can strike though and likes to kick, which could see him drawn into the striking battle more often than would be wise against the more dangerous striker, and I think that will cost him as Yusuff lands hurtful blows and finds a second round TKO finish.

These two have similar styles, being good wrestlers who can also swing heavy leather on the feet, though without being the most refined or technical about their work.

In Brunson’s favour is his more extensive experience at a high level and his imposing 6” reach advantage, but on the other hand Heinisch pushes a high pace, is the younger, fresher fighter and I believe will have a speed advantage too.

Giving that they have similar approaches this is likely to be a closely contested fight, but I feel Heinisch’s work rate, better chin and swift closing of the distance to land punches or work for takedowns will help him take the win on the scorecards.