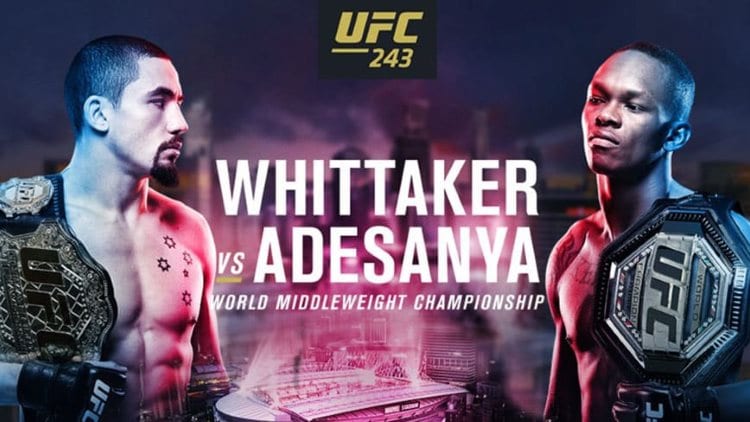 Current champion Whittaker and interim titleholder Adesanya battle in the main event to become the undisputed kingpin at 185lbs.

Both fighters are very high level strikers, so fan should be in for a treat here.  Whittaker is a very good boxer with knockout power who is also light and fast on his feet and makes effective use of kicks, while also being as tough as nails.

The leaner, lankier Adesanya has a very technical kickboxing game with a versatile arsenal of kicks, is naturally creative, fights intelligently and is mindful of his defense as well as offensive.

Whittaker’s constant injury woes and the toll taken by the wars he’s already been in are a concern here, but he’s proven that he has the mindset to overcome adversity and as well as being able to take a punch he’s the harder hitter here too.

Adesanya’s best bet it to keep Whittaker at range with his kicks, but I think the champion is going to be able to use his speed and power to burst forward and trouble ‘Stylebender’ at closer range, and that’ll gradually allow him to gain the upperhand and land the blows that’ll see him claim a third round TKO stoppage.

Two high-octane lightweights on show in the co-main event should make for an entertaining scrap.

The striking battle will be intriguing, with Iaquinta possessing an effective boxing game, but coming in at a 5” reach advantage here against Hooker.

Hooker likes to press forward, but he’d be wise to do so with caution here as Iaquinta will trade effectively from inside.  The New Zealander does have the tools to fight more from range though and working kicks and punches on the outside, together with being the heavier hitter and effective knees could well trouble ‘Raging’ Al.

Hooker also has a solid ground game and is a threat from submissions, but I think Iaquinta is too well versed in that regard to be caught out and so the fight will more likely be won and lost on the feet, and I’ll take Hooker to edge out the action, but ultimately have to settle for a decision victory.

Tuivasa is something of a heavyweight slugger, but to his credit, he moves surprisingly well for his size and portly physique.

Spivak has the advantage on the mat here and would be wise to take the fight there early and often, but I think it’s going to be hard for him to get the better of a fired-up Tuivasa on home turf here and the Aussie will use his speed and power to put him away by knockout in the opening five minutes.

This fight may have been a little more clear cut if it wasn’t for the fact that Lima has proven several times in the past that his chin is a major concern.

With Jumeau having good power in his hands and karate-based kicks that certainly leaves pause for thought here, but in terms of all-round skill-set Lima is the better fighter.

Lima will have a 3” height and 2.5” reach advantage that he has the striking ability from range to make use of, but it’s his grinding wrestling skills that I feel would be his best route to a victory here and earn him a win on the scorecards.

This fight was moved to the main card on short notice after Holly Holm pulled out of her fight with Raquel Pennington recently.

These are two relatively green heavyweight fighters, especially Tafa, who had just three pro-fights on his record, and as such, in terms of their skill-sets we are likely to see two brawlers here, though De Castro did make use of leg kicks last time out.

Still, based on there performances so far, despite his inexperience, Tafa may just have a little more to offer, and with the home support behind him that’ll lead to a TKO victory in the opening round.