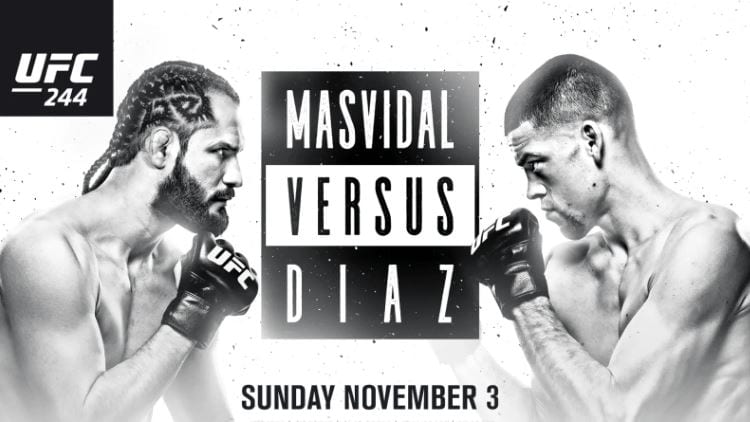 A lot of the hype around this fight is based around the two headliner’s personalities and willingness to throw down at the drop of a hat, but stylistically it’s a very good match-up too.

Both fighters are strong boxers, with Diaz tending to work for a high volume approach that favours accuracy and accumulated damage to make his mark, while Masvidal has typically looked to use his slick skills to be defensively sound, work on the counter and outbox opponents, but after sometimes finding that doesn’t play well with the judges has become more offensive and shown his finishing abilities.

I’d give Masvidal the power advantage, but the two fighters have strong chins, good cardio (although Diaz did look more tired than usual in his comeback fight against Anthony Pettis) and plenty of heart, so this fight could well go the distance on the feet.

The ground battle could be interesting too.  Diaz has excellent submission skills, certainly the better of the two, but Masvidal is actually comfortable on the mat too, and while I don’t see him troubling Diaz, he may well have the defensive skills to survive there and get back to his feet if required.

It’s a tricky fight to call.  I do favor Masvidal as he’s been fighting more frequently, is the quicker of the two, will be sharper with his counters and has more power, but he needs to be careful to match Diaz’s intensity and offensive drive so as not to lose potentially close rounds on the scorecards.

Masvidal is riding a wave of momentum at the moment though and his striking seems to be clicking and becoming more dangerous than ever, so I like him to emerge victorious on the scorecards after a hard-fought battle.

Darren Till vs. Kelvin Gastelum

Till burst onto the UFC scene brimming with confidence and racked up some big wins over the likes of Donald Cerrone and Stephen Thompson, but his self-belief has by his own admission been shaken after a submission loss to Tyron Woodley followed by a brutal knockout loss to Jorge Masvidal.

Till took time out to recover and get his head together after that, but there have been more concerns since then, including hitting the headlines after getting into trouble with the police during a drunken night out on holiday, while a decision to now move up to middleweight comes with risks, and his fight week preparations have gone badly due to Visa issues delaying his arrival in NYC.

All of that hardly seems like ideal preparation to now be going up against a tough opponent in Gastelum, though Till may take some heart from the fact that he also used to be a welterweight, and the Brit will enjoy a 3” height and reach advantage over him.

Nevertheless, Gastelum is tried and tested at 185lbs against a series of top contenders and his stocky stature hasn’t been too much of a hindrance thanks to his hand speed, power and sturdy chin.

Till is the more versatile striker though, mixing up his kicks and punches well, and though he does like to turn up the heat and go on the offensive, he can adopt a more patient approach from range f required.

Gastelum does have the wrestling advantage here and mixing in takedowns with his striking could be an important factor if the striking battle is close.

Till is a talented striker and could certainly bounce back here and re-establish himself as a force to be reckoned with, but I don’t feel confident with his recent troubles in and out of the Octagon and so I’m going for Gastelum to TKO him in the second round.

Another very interesting fight here, with Thompson attempting to rebound from a troubling spell that’s seen him win just once in his last five fights, including a big KO defeat courtesy of Anthony Pettis last time out, against an in-form fighter in Luque.

A lot of those other losses were close though and Thompson had been winning his fight with Pettis up until the surprise superman punch caught him off guard.

Luque is a dangerous striker in his own right with his knockout power being on display during his recent six-fight winning streak, but there’s a world of difference between getting wins over the likes of Mike Perry and Bryan Barberena, compared to someone of Thompson’s calibre.

In the end I think Thompson will remain to slick and technical to let Luque find a home for his big punches and will keep the fight at range, stay defensively sound and slowly chip away at his opponent to earn himself a decision victory.

When you consider his cardio issues, back problems, limited skill-set and lackadaisical attitude, Lewis has been one of the biggest over-performers in the UFC in recent years, but credit where it’s due, his ability to hurl out a fight-ending haymaker out-of-the-blue, even when he looks down-and-out, is impressive.

Still, as hard as he hits, it’s hard to really put faith in the chances of those moments of magic continuing to happen, although in Lewis’ favor, he’s going to have a 4” height and 6” reach advantage to work with and he does move deceptively quickly for a big man.

Nonetheless, the stocky Ivanov is a very durable fighter who has never been stopped by strikes in his 20 fight career and won’t be out of his depth on the feet here,  but would do well to use his very  capable wrestling and submission skills to put Lewis out of his comfort zone and wear him out, leaving him with the option of a finish either by ground and pound or submission late in the fight.

This is another intriguingly balanced fight between the undefeated Gillespie, who has already racked up six wins in the Octagon, and Lee, who was on a roll himself a couple of years ago, but has since lost three of his last four fights.

Gillespie is a high-level, relentless wrestler with a pressure-heavy approach that so far no one has been able to deal with, leading to 11 stoppages from 13 fights due to strikes or submission.

Lee will be the first time he’s really coming up against another strong grappler though, so it will be interesting to see how he is able to cope with that, and how he’ll cope if plan A doesn’t work for him.

Still, I feel that even though Lee might have the size advantage, Gillespie is the stronger wrestler and his pace and toughness is going to be hard for Lee to keep up with, especially in the later rounds where he tends to fade, leading him to a decision victory.