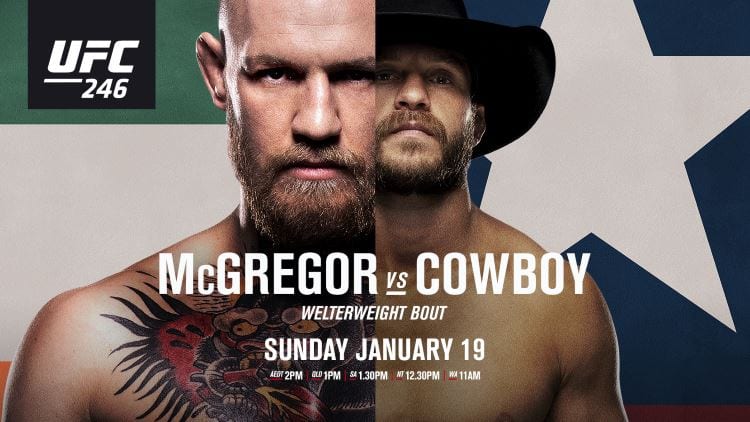 UFC 246, the first event of the year for the promotion, lands this Sunday, January 19th in Las Vegas.

2020 starts with a blockbuster pay-per-view card headlined by the return of Conor McGregor, who steps back up to welterweight to fight Donald ‘Cowboy’ Cerrone.

McGregor returns to more winnable territory at UFC 246 after facing an almost impossible mission against Floyd Mayweather in the boxing ring, followed by a clash of styles against Khabib Nurmagomedov that always looked like a tough night at the office.

That’s not to say that Cerrone is an easy fight though as he’s still a skilled, dangerous veteran, but his insistence on fighting so frequently has taken a toll and he’s coming off two TKO losses in a row.

On top of that, Cerrone has vowed to engage in a stand-up fight with McGregor, even although he’s actually got a very good submission game, while being spotted limping on UFC Embedded earlier this week is a concern too, despite ‘Cowboy’ having since laughed it off.

Of course there’s question marks about McGregor too after appearing to have gone off the rails outside the Octagon in recent years and having only two MMA fights in the past three years.

McGregor does now seem like a refocused character though, more grounded and interested in competing frequently, while Dominick Cruz revealed recently he’d observed the Irish superstar adding new wrinkles to his fight style in training recently.

McGregor’s left hand remains the most deadly weapon and he’s clever in his set-ups and clinical in his execution, which will test Cerrone’s overworked chin, while front kicks to the body could also expose another weak point in his opponent’s midsection.

‘Cowboy’ has the better all-round kicking arsenal though, works knees well at closer range and once he gets into his rhythm his all-round combination work and very good cardio makes him an increased threat in the later rounds.

McGregor’s decision to fight at 170lbs is questionable as though ‘Cowboy’ has had mixed results there, it’s generally been due to going up against bigger opponent than him, and ‘The Notorious’ has shown more signs of issues with his own gas tank at this weight class.

Overall it’s an intriguing fight, but I think it’s one where I’m leaning towards McGregor getting the better of the ageing ‘Cowboy,’  proving to be the quicker fighter and finding a home for the left hand and claim a second round TKO victory.

These two fought once before, with Holm emerging victorious in what was her UFC debut, but Pennington actually put on a good showing and the former boxer only just sneaked past her by split decision.

Since then Holm has gone to hold the bantamweight title at one stage and fought for it again unsuccessfully in her last Octagon outing, while Pennington also had a chance to compete for the strap back in 2018.

I think we’ll see another very close fight here in a similar style to their previous encounter, with Holm being light-footed on the outside, springing in and out with short flurries of kicks and punches, while the hard-nosed Pennington will try to march her down and land punches, while also keeping an eye out for opportunities to counter.

Holm has a bad habit of what could be called ineffective ‘busy work,’ throwing out a lot of offense that doesn’t connect, as evidenced by only landing on 17 of the 164 significant strikes she threw to the head the last time these two met.

On the other hand, her speed, movement and endless cardio makes her hard to track down, so even though there’s more purpose to Pennington’s output, it’s difficult for her to land consistently.

So more of the same as before is likely here and with not much to choose between them Holm’s activity and energy may well sway the judges once again.

This is not the most glamorous heavyweight fight to be including on the main card of such a big event, with both Oleinik and Greene coming off losses.

Oleinik is now 42-years-old, yet with his crafty and very effective submission game he remains a real threat, but two first-round knockout losses in a row – the most recent after just 12 seconds, suggests that he now needs to be very wary about spending too long exchanging on the feet.

That might encourage Greene to keep this one upright, but truth be told, while he’s capable of mixing it up on the feet and will have a 5” height and 2” reach advantage, it’s not his strong suit and he’s at his most dangerous on the mat with submissions too.

The problem with that is that Oleinik is simply on a different level in that regard and I think the ‘The Boa Constrictor’ will prove that sooner rather than later here with a submission finish.

Gadelha gave Joanna Jedrzejczyk one of her toughest fights ever in the early days of her UFC career, but despite being a strong, well-rounded fighter she’s underperformed at times since.

Similarly, Grasso came into the UFC undefeated and was tipped as a future star, but surprisingly has only gone 3-3 since then.

Both are still talented fighters though who could yet live up to their full potential.  Grasso is a fast and fluid striker with good technical boxing ability and kicks to back it up, which together with her movement and cardio would serve her well if this is purely a striking battle against Gadelha, who is not out of her element striking, but isn’t as quick and tends to be more cautious with regards to her energy levels.

However, Grasso has had trouble with strong wrestlers before and that plays into Gadelha’s hands as she’s a powerful and skilled grappler who has a good chance of bullying her in the clinch and on the mat to win on the scorecards here.

The last few years have been very strange for former lightweight champion Pettis as he’s struggled to find consistent form while bouncing around between divisions, trying his hand at both featherweight and welterweight before returning to 155lbs for this fight, leaving him with a 4-7 record over the past five years.

This time out he’s fighting less of a ‘big name’ opponent than he’s used to, but nonetheless a very challenging one as Ferreira is in the midst of a five-fight winning streak in the division and has shown that he’s very good at fighting with the kind of pressure-style that Pettis has often struggled with.

For all he’s an extremely talented striker who can produced moments of magic out of thin-air, generally Pettis needs space and time to operate effectively and that’s something Ferreira won’t be giving him much of and will instead look to brawl, though his focus on being offensive can leave the Brazilian exposed defensively on the feet.

Ferreira is also very good on the mat with high level BJJ, but then again, for all his striking credentials, ‘Showtime’ is also well versed on the mat too, so he can’t be overlooked in that regard.

Overall I just feel Pettis has never really been able to overcome some of the flaws in his style and while he could pull a highlight reel knockout from nowhere, I think it’s more likely that Ferreira will just get in his face from start to finish and maintain a high pace in the striking and grappling exchanges to secure a decision victory. 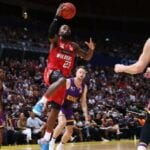 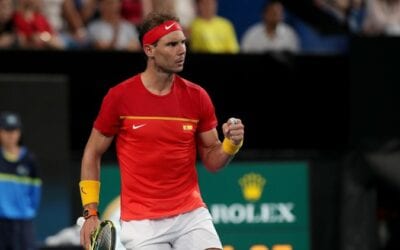 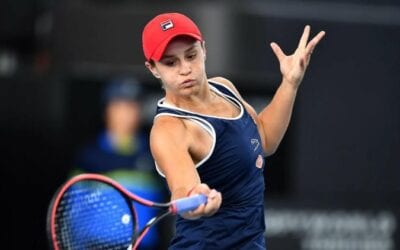