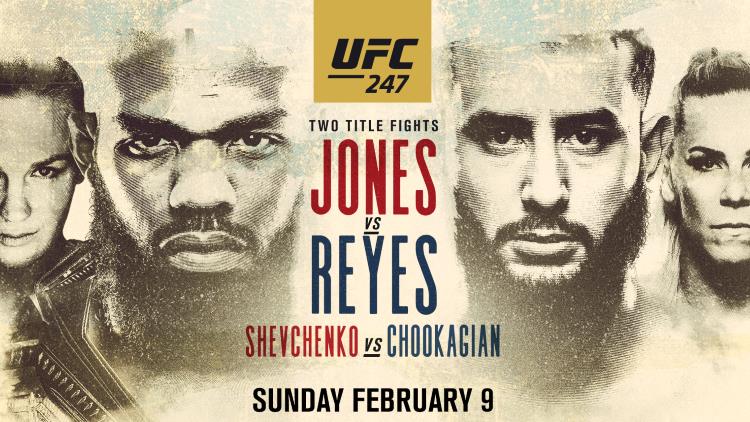 For the first time since his original fight with Daniel Cormier, Jones will face an undefeated opponent in the shape of Reyes on Saturday night.

Reyes has proven to be a very dangerous striker with a strong kicking game and heavy punches to back it up, leading to a number of big first-round highlight reel finishes, though it’s worth noting that two of his last three fights against OSP and Volkan Oezdemir did go the distance.

Both men are the same height, but as usual Jones has a hefty 7.5” reach advantage, though only 1.5” in terms of leg reach.  Jones is a master at using that advantage to dictate the range with strikes from distance, pressure and variety of techniques to keep his opponent’s guessing, though he has become more predictable over time and is no longer constantly evolving.

The most interesting thing about this fight is that Reyes has a similar style to Thiago Santos, who gave Jones a tough fight and that may well have given the challenger more confidence that he can bring the fight to him on the feet and emerge victorious.

Reyes takedown defense is a concern though and while he doesn’t use it too often, Jones has even been able to take the likes of Daniel Cormier down and is strong in the clinch.

As time goes on Jones feels less invincible than he used to be and Reyes has a legitimate chance to win here, but I still feel that between his striking from range, clinch work, takedowns and durability, the champion will edge his way to a decision victory.

The challenger Chookagian comes into this fight with a 4” height advantage, but there’s a negligible difference in reach between them and Shevchenko is likely to be the significantly stronger of the two.

Chookagian is a very capable striker, albeit without being much of a knockout threat, and has a high output style.  Shevchenko’s kickboxing is on a different level though and her composure and counter-striking ability is likely to be a big challenge for Chookagian to overcome.

Shevchenko is also a strong grappler and again, while Chookagian isn’t out of her depth there, she’s likely to come up second best on the mat too.

So, while she may make the fight somewhat competitive, especially given that Shevchenko always seems to leave something in reserve rather than going all out to finish her opponents, I still think that the champion should comfortably win out on the scorecards here.

A somewhat curious match-up to put on a pay-per-view card, with Adams having lost two of his three fights in the Octagon so far, while Tafa was KO’d in his debut last time out.

Both fighters are still pretty raw, particularly Tafa, who is only four fights into his professional career and still relies on simply being a heavy hitter to get the job done.

Adams will have a 5” height and 7” reach advantage here and should also have the better wrestling if he wants to mix things up a bit, and I think he’ll come away with a second round TKO stoppage here.

A couple of disappointing losses during his UFC run has taken some of the hype away from Bektic, but there’s still a lot to like about this powerful wrestler who also wields finishing power on the feet.

Ige has a higher output on the feet and will be more willing to take the fight to Bektic,  but while he could edge the striking action I think he’ll have more trouble with his opponent’s ground game.

That’s not to say that Ige is vulnerable there, he’s actually quite capable, but I think Bektic will just prove to be too much for him and it’ll be his mat work that earns him the decision victory.

Latifi moves up to heavyweight for the first time and immediately goes up against one of the heaviest hitters in the division.

After relying far too much on that KO power to get him over the finishing line, there’s been signs in Lewis’ previous Octagon outing that he’s actually starting to take things more seriously, improving his cardio and fighting a little more strategically, albeit not always being very technical with his striking output.

He’ll have 5” in height and 5.5” in reach over Latifi here to aid him in the striking exchanges, but will still have to be somewhat wary of ‘The Sledgehammer’ as though he doesn’t throw with much volume he does also possess heavy hands.

Latifi’s wrestling could be key for him and if he can get Lewis down and keep him there then his ground and pound will be a significant threat.

It’s going to be a tall order to overpower the bigger man in Lewis though without clinical technique and I suspect that ‘The black Beast’ will eventually land a crushing blow that puts Latifi away.