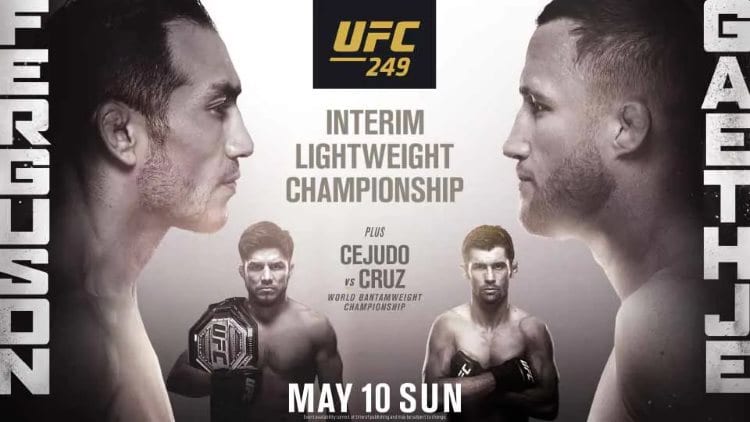 It’s a great shame that we won’t be seeing Ferguson fighting Khabib Nurmagomedov as that’s a fight that everyone had wanted to witness and had historical significance, given both men’s long winning streaks, but on the bright side, by bringing in Gaethje instead the UFC has all but ensured a thrilling and explosive finale to their first event in quite some time.

Both men are phenomenal finishers, push an incredible pace and are exceptionally active with the number of strikes they unload on their opponents, so it’s going to be quite a spectacle to see them go after each other for up to 25 minutes in the Octagon.

Of the two, Gaethje is the more naturally heavy-handed fighter and is at his most dangerous in close, while he also has very hard leg kicks.  He’s also known for having excellent durability, which is just as well because he eats a huge amount of strikes over the course of a fight.

That could be a problem against Ferguson though as he is also deadly on the feet, has tremendous creativity and is the quicker and more agile of the two, not to mention also having a 6.5” reach advantage.  However, Ferguson can also get hit more often than he should and has been rocked in the past, though like Gaethje his powers of recovery are first-class.

Elsewhere, Gaethje is a strong wrestler, but Ferguson is also a very good wrestler, but has a strong submission game to go with it, so if the fight goes there, he may well get the upperhand.

It should be an all-action affair and both fighters will take big shots, but I am leaning towards Ferguson here as he has more versatility, unpredictability, can work from range effectively, threaten with submissions if need be and will have better cardio.  Gaethje could absolutely find a finish himself in the early rounds, but I’ll take Ferguson to survive an early onslaught and win by TKO in the fourth round.

Despite having been on the sidelines once again for over three years, injury-jinxed former champion Cruz is being thrust straight back into a title fight against Cejudo on Saturday night.

To be fair to him, we’ve seen Cruz come back against the odds like this before, narrowly seizing the title from TJ Dillashaw in 2016 after having fought just once in over four years, which is a testament to both his skills and mental toughness.

All that time out is catching up with him though as he’s now 35 as he makes his latest comeback, and given that his style is so hyper-focused on fast movement, footwork, reflexes and timing, there will understandably be question marks as to whether he can still pull that off at the highest level in the present day.

That’s even more of a challenge given that he’s facing an elite fighter like Cejudo, who has claimed both the UFC’s flyweight and bantamweight titles in recent times with impressive wins over the likes of Demetrious Johnson, TJ Dillashaw and Marlon Moraes, to add to a trophy cabinet that also contains an Olympic wrestling gold medal.

Cejudo is the physically stronger man of the two, hits harder and has proven to be very durable, which can see him eating shots to land something bigger of his own, which while always risky could work here since Cruz is not known as a power puncher himself.

What Cruz does have is a 4” height and 5” reach advantage, and together with his hard-to-track-down movement and volume striking that presents a path to victory, while his excellent scrambling ability means he’ll be hard to keep down if Cejudo goes to his wrestling.

It’s an intriguing fight and it’s always wise not to rule out Cruz, regardless of the length of his layoff.  If he was in his prime, active and healthy then ‘The Dominator’ could certainly become champion again, but as things stand I think he may have some success early, but then Cejudo will start to land the more telling blows and turn the tide to win a decision victory.

Both of these heavyweights are fearsome knockout artists, so if they are willing to throwdown it could provide fireworks.  On the other hand, if their mutual respect for each other’s lethal weapons leads to a cautious affair then there’s always the risk it could be relatively uneventful.

Ngannou has frightening one punch power that can end anyone’s night in an instant, but technique wise I would have to give Rozenstruik the edge as he has a vast amount of high-level kickboxing under his belt too and will be the more versatile here in terms of his attacks.

Both fighters training camps are likely to have been somewhat limited and far from ideal due to the coronavirus restrictions, so that could further increase the chances of a slow-paced fight, but on the other hand it may also spur them on to get an early finish, and if that’s the case then I favour ‘The Predator’ to be the one landing the killer blow.

Having gone four fights without a victory in recent times, Stephens back is up against the wall here, but he’s not the type of fighter who is likely to let that phase him, and indeed it might make him more dangerous.

That being said, Stephens toughness has been proven by being in a lot of wars now and that could start to be taking a toll on him, while Kattar seems to be the fresher of the two.

Both men will be looking to engage on the feet and it should be very competitive, but I think Kattar will make use of his slight height and reach advantage with clean straight punches and also prove to have the quicker hands and higher output, which over the course of 15 minutes will enable him to get the edge over the always gritty Stephens to earn a decision victory.

Hardy’s odd UFC career continues to rumble on, and to his credit, though he lost his last fight against Alexander Volkov, the fact he managed to survive until the final bell against by far his toughest opponent to date was in some respects a moral victory.

However, he now heads back to fighting less established competition in the shape of De Castro, who is only six fights into his career, but showed off his heavy hands in his UFC debut with a KO against the equally green Justin Tafa.

Hardy will have the athletic advantage here, together with a 4” height and 6” reach advantage, and I think he might want to show off his continuing technical improvements here as he looks to avoid De Castro’s power punches and outbox him on the outside, potentially getting a finish, but perhaps more likely securing a decision victory.