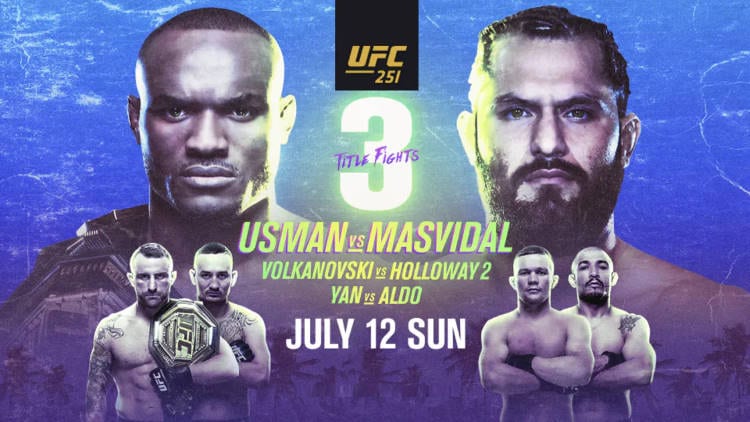 UFC 251 takes place this coming Sunday, July 12th from Fight Island (aka Yas Island) in Abu Dhabi and we’ve got our predictions for all the fights below.

This always looked like the title fight to make for the UFC at 170lbs heading into 2020 with both fighters stock being at an all-time high, but the promotion had other plans and only the withdrawal of Usman’s original opponent, Gilbert Burns, after testing positive for covid-19 has resulted in the bout being put together on just six days’ notice.

Its a big ask for either man to adjust to such a massive fight with less than a week to prepare, but there’s no doubt that it’s especially challenging for Masvidal, particularly since even just within the past fortnight he’d been more interested in verbally sparring with the UFC over his pay rather than actively training for a fight.

Meanwhile, Usman has been training hard for a five-round war and with his strong wrestling base, increasingly impressive striking, exceptional cardio and proven durability, he appears to have all the attributes to cope with whoever is put in front of him.

Masvidal is a savvy fighter though with many years of experience, and its to his credit that he’s actually managed to find a new gear in the past year or so, and that’s taken his performances, and his star power, to a whole new level. Essentially he’s embraced a more offensively minded approach, seeking finishes where in the past he would have relied on his consummate counter-striking ability to attempt to outpoint opponents, and it’s proven to be a winning formula for him.

It’s also worth noting that there’s more to Masvidal’s game that just technical striking prowess as he’s actually a well-versed veteran on the mat too and has good takedown defence. Nevertheless, I do feel that Usman’s dominant wrestling and physical strength is going to give him real problems, and the champ might well look to lean more heavily on that given that he’s not had adequate time to prepare for a prolonged striking battle with such a dangerous opponent.

Overall it’s an exciting match-up, but as talented as Masvidal is it’s one where I’ve always favoured Usman, and even more-so given the short notice timing. Masvidal hasn’t been finished over in a decade though and I suspect he’ll be outgrappled for large portions of the fight, but make it to the final bell.

Back in December, Volkanovski finally ended Holloway’s long unbeaten reign as the 145lb kingpin with a convincing decision victory, and now he’ll look to prove that was no fluke as they lock horns for a second time.

Volkanovski punished Holloway early in their first fight with repeated leg kicks, so that’s something the former champ will no doubt be mindful of this time, and the fact that ‘Blessed’ was able to make more of an impression later in the bout suggests he might have started to get a read on his opponent, so it’ll be interesting to see if he can carry that into the rematch.

Volkanovski is smaller than Holloway by 5″, but actually has a slight reach advantage and is something of a powerhouse, equating to hard-hitting punches on the feet and strong wrestling on the mat. He may look to utilize that latter fact more in the second fight to change things up, though Holloway’s takedown defense is excellent, so that may not pay dividends as much as he might like, but it could keep the former champ guessing about what’s coming next.

It’s a fight where it feels like Holloway has more offensive options on the feet and more ability, but Volkanovski’s more limited yet extremely effective approach is hard to break down. With a better game plan and perfect execution I could certainly see Holloway steering clear of the leg kicks and out striking the champ here, but due to the pandemic his preparation appears to have been far from ideal and Volkanovski is so dependable and self-assured that I’m going to take him to edge out this fight and retain the title.

UFC 251 has an embarrassment of riches, with a third title fight on the line-up seeing the in-form Yan going up against the seasoned veteran Aldo for the vacant bantamweight title.

Aldo’s inclusion is somewhat controversial given that he actually lost his 135lb debut by split deision against Marlon Moraes back in December, but nevertheless, the Brazilian star did show in that fight that he’s comfortable competing in the weight class, demonstrating respectable cardio and energy levels.

That’s just as well as Yan is something of a force-of-nature right now, applying constant forward pressure with an non-stop output of hard-hitting offense.

Aldo still remains a dangerous striker in his own right though and he’s a very polished boxer who could look to punish Yan on the counter and has strong leg kicks too.

Yan’s pace is relentless though and if Aldo can’t put him away in the first ten minutes I think the fight starts to swing more heavily in his opponents favour, leading to the Brazilian gradually being worn down by the volume of strikes and being stopped in the final round.

The last time these two fought Namajunas was the strawweight champion and she looked to be getting the better of Andrade early in the fight, before she was KO’d in somewhat freakish fashion via a big slam in the second round.

That’s certainly a notable part of Andrade’s game – she’s very strong and does use that to her advantage to ragdoll her opponents to the mat, but Namajunas is very talented and comes from a good camp, so it’s hard to imagine that lightning will strike twice with regards to a slam KO.

On the feet Andrade is extremely durable, tirelessly aggressive and hits hard, but in terms of technique, movement and speed, Namajunas is on a completely different level and also holds a 3.5″ height and 3″ reach advantage, so I expect her to comfortably be able to pick apart the large holes in her opponent’s defensive game, while being mindful not to get drawn into a brawl.

Ever if her big slams fail, Andrade may look to outwrestle Namajunas, but while she may be able to outmuscle her, she would have to be very wary of ‘Thug’ Rose’s razor-sharp submission threat and swift scrambles.

There’s somewhat of a question regarding Namajunas’ mental strength heading into this fight as she did flirt with retirement after the Andrade loss despite only being in her mid-20’s, but she remains a very talented fighter and I’m going to take her to keep this fight at range for the most part and outland Andrade throughout to earn a decision victory.

The latter stage of PVZ’s UFC run has been plagued by injuries and ailments, most notable a broken arm she suffered during a loss to Jessica-Rose Clark that unfortunately has been reinjured several times, keeping her on the side-lines for large periods of time.

Over 18 months since her last outing, VanZant returns for the final fight on her UFC contract to take on Ribas, who has racked up all three of her Octagon wins to date in the time VanZant has been on the recovery table.

Brought into the UFC at a young age, VanZant has always been something of a work-in-progress, possessing the toughness and athleticism to be a fighter, but still being rough-around-the-edges in terms of technique, and the injury woes have unfortunately likely stunted her development in that regard.

That makes this a tough fight as Ribas has shown a lot of promise and is well-rounded. She’s a good kickboxer, and though PVZ is somewhat capable in this regard too, I believe the Brazilian will prove to be more efficient and effective with her output on the feet.

VanZant does well in scrambles and her excellent cardio serves her well, but again I believe Ribas should have the technical advantage on the mat too and should be able to get the better of the action wherever the fight goes to secure a decision victory.

To find out our best bets for the full UFC 251 fight card, read our latest UFC previews and betting tips!

UFC 251 is a pay-per-view event so you need to pay to watch. You can live stream UFC 251 through the UFC website and app, or order the PPV through Foxtel.

Read our UFC 251 preview and bettings tips to find out all the fights and best bets on the card!