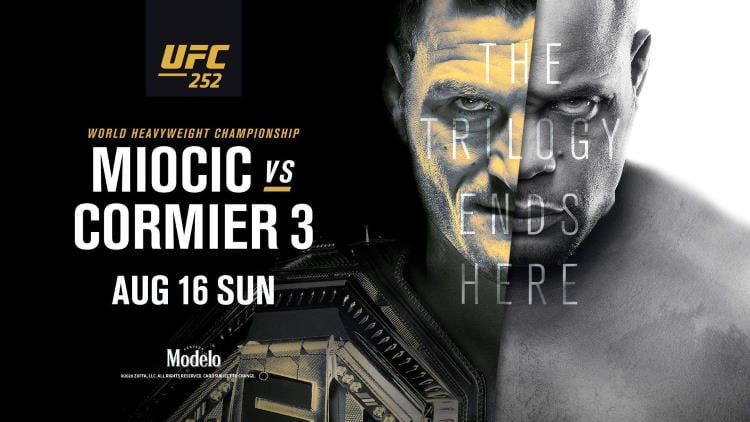 In the first fight between these two Cormier surprised Miocic in the opening round with a knockout finish, but in the second fight Miocic gradually began to figure out a gameplan on the feet and landed punishing body blows that would set up a fourth round TKO stoppage.

Now they go at it again to settle the score and it’s also going to be the 41-year-old DC’s retirement fight. Cormier had actually wanted to retire a year ago, but injuries postponed that, and he did get heavier than we’ve seen in the past during his time off and has admitted that his training camps have become tougher and more tiring as he’s got older, so there are questions to be asked about whether he’s really going to be 100% on Saturday night.

Nevertheless, Cormier is a smart man and he’s made it clear heading into this fight that he’s not planning to go toe-to-toe with Miocic, and instead plans on using his Olympic-level wrestling to grind out a win and retire as champion.

Its a strategy that Cormier has used in the past and with excellent takedown and stifling control both on top and against the cage utilizing his short, stocky frame can be a nightmare for opponents to deal with.

While not on the same level, Miocic is no slouch in the wrestling department either though, so he’ll be doing his best to fend off Cormier’s grappling attempts and get this back to striking range, where his very good boxing ability, movement (when he remembers to use it) and body work could well pay dividends against an ageing DC.

Cormier remains heavy-handed too though and is quicker than his physique would have you believe, so it should be exciting any time these two opt to exchange strikes.

If this was prime DC I’d be more confident in picking him here as he’s an elite wrestler who is more than willing to embrace the grind and win in a less-than-thrilling fashion if required, but I do worry that age is catching up with him and the long layoff combined with injuries means he’s not going to be operating at his best.

Miocic is certainly the less shop-worn of the two and I believed he’ll have the better cardio in the later rounds, which will enable him to make use of his effective striking from range to keep Cormier at bay and produce a TKO finish in the championship rounds.

The UFC clearly sees the charistmatic O’Malley as a potential breakout star after two big finishes via strikes so far this year and that’s reflected in his co-main event spot on this PPV card.

O’Malley exudes confidence and appears to have the skills to back that up as he’s a high volume, dynamic, lanky striker who manages to combine accuracy, power and at times flashy techniques in an effective fashion.

Vera might not have the same kind of hype behind him, but he too is a talented fighter and a proven finisher, both on the feet and with submissions. Range could be an issue for Vera here though as even though he’s a good sized bantamweight, O’Malley still stands 3″ taller, has 1.5″ in reach over him and is also crisp on the counter, which may lead to “Chito’ eating strikes as he tries to close the distance.

Vera’s submission threat is definitely something to watch in this fight, but I’m not convinced it’s going to be an easy task for him to get O’Malley down in the first place and as such I think ‘Sugar’ Sean is going to be able to get the better of the action on the feet – though this time he’ll have to settle for a decision victory against his tough, durable opponent.

This should be a fun fight between two hard-hitting heavyweights who will be happy to keep this one standing, with Dos Santos looking to utilize his boxing, while Rozenstruik will lean heavily on his kickboxing background.

Both men are coming off tough losses, with Rozenstruik only lasted 20 seconds against Francis Ngannou last time out, and notably that was just a few months ago. Generally though there’s been more concerns about the chin of dos Santos, and that’s shown up recently with back-to-back TKO defeats to go with several other stoppages via strikes he’s picked up over the years.

Still, the 36-year-old JDS is a vastly experienced veteran who continues to be a dangerous finisher in his own right, is coming into this one looking in great shape and at his best he uses footwork well together with an accurate jab to dictate the range and set up his power hand.

Rozenstruik isn’t always the most active striker, but he throws with both power and speed and will threaten both with punches and heavy low kicks along with a dangerous head kick too.

If this one goes the distance it’s possible JDS may emerge on top if he’s opted for a cautious point-scoring approach, but I do fear for his chin against a big finisher like Rozenstruik and believe he’ll emerge with a TKO stoppage in the second round.

At 35, Dodson may no longer be in his prime, but he still remains a gifted fighter athletically and though he has largely alternated between wins and losses in the past few years, it’s worth highlighting the fact that in 32 career fights he’s still yet to ever be finished or submitted.

It would seem unlikely that’s about to change in this fight as Dvalishvili has only ever recorded three finishes in his 15 fight MMA campaign, but that’s not to say he isn’t a good fighter as he’s currently riding a four-fight winning streak, is a strong wrestler with big takedowns, throws caution to the wind with aggressive strikes and spinning backfists on the feet and is very durable.

As is often the case, Dodson will be the smaller man here, giving up 3″ in height and 2″ in reach to Dvalishvili, but his speed and technique should make up for that, and due to his agility and quick scrambling I think he’ll make it very difficult for his opponent to control him with his grappling.

Dodson can be a frustrating fighter at times these days as it can feel he’s not fighting to his full potential offensively and can lie in wait too often. That could be a problem here as he has to make the most of his striking opportunities here if he wants to emerge victorious.

Overall I think Dvalishvili’s wrestling, and in particular his takedowns, is going to be the most significant factor here. He might not be able to hold Dodson down for long, but his willingness to keep doing so will help win rounds and keep his opponent from having the time and space to get his striking going, leading to a decision victory.

This fight moves up to the main card from the early prelims after Ion Cutelaba tested positive for Covid-19, leading to the cancellation of his bout.

Burns is of course the brother of current welterweight star Gilbert Burns and is another talented fighter who is particularly strong on the mat, with the vast majority of his wins coming by way of submission.

That makes things interesting as Pineda is also renowned for his submission prowess, but though he’s the more experienced MMA fighter of the two, I do think Burns is the better grappler and also should hold the advantage on the feet here too, leading to a second round submission stoppage.

Our top rated and recommended bookmaker for UFC 252: Miocic vs. Cormier 3 is Sportsbet – JOIN HERE. Other top rated bookmakers include, PlayUp, and SportsBetting.

To find out our best bets for the full UFC 252: Miocic vs. Cormier 3 fight card, read our latest UFC previews and betting tips!

UFC 252: Miocic vs. Cormier 3 is a pay per view event (PPV) which Australians can purchase and watch live on UFC Fight Pass or Foxtel.

Read our UFC 252: Miocic vs. Cormier 3 preview and bettings tips to find out all the fights and best bets on the card!