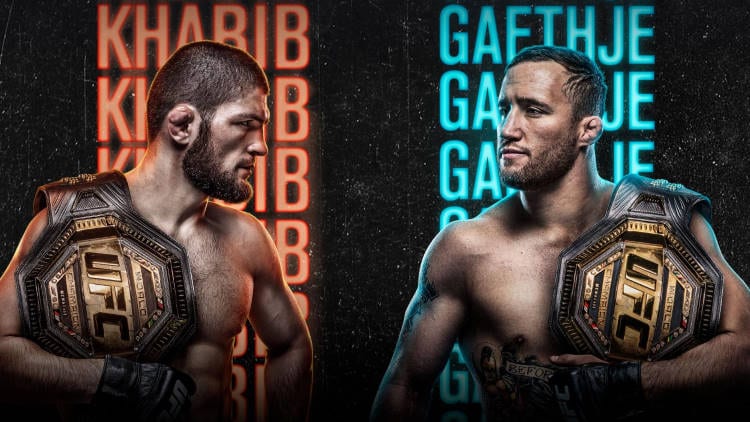 One of the biggest fights of the year is almost upon us and it presents one of lightweight champion Nurmagomedov’s most intriguing challenges to date in the Octagon as he goes up against Gaethje.

Gaethje is as entertaining a fighter as the UFC has under contract as he’s the pinnacle of technical brawlers with his kill-or-be-killed attitude, relentless offense, finishing power and good cardio, combined with a cast-iron jaw. The ‘technical’ part of his brawling shouldn’t be overlooked as despite his ultra-high output he still maintains very respectable accuracy and he is clinical with his powerful, debilitating leg kicks and will target the body as well as the head with his punches.

Essentially Gaethje breaks fighters will on the feet, while of course on the other hand Khabib famously does so to the best of the best on the mat with his dominant wrestling and grueling ground and pound that no-one has yet come even close to having an answer for.

Gaethje is intriguing in that he’s not only a deadly striker, but at his foundation he also has a very good wrestling base to work from, and, up to this point at least, has had an uncanny knack for not being in the least deterred by getting repeatedly punched in the face.

That being said, Gaethje can be taken down, and though he’s demonstrated he can get back upright, that’ll be easier said than done against Khabib, who is very good at tying up opponent’s legs and crushing them up against the cage while grounded to limit their escape options.

Gaethje’s cardio maybe very good when he’s in a swashbuckling striking battle, but Khabib’s strength-sapping grappling exchanges may prove to be a different story and could have a big impact in the later rounds where he typically continues to thrive and seeks opportunities to finish by submission.

So, Gaethje has to make his impression felt early on the feet to make the champ wary of moving in for takedowns, and he has all the tools to do just that, but his naturally offensive-minded style will inevitably leave openings for Khabib to either swoop underneath strikes or grab a leg kick to take this fight to the mat and impose his will.

Gaethje could catch Khabib at any moment and make history, but I have to favor the champion to continue to do what he does better than anyone else and dominate with his elite wrestling. Given Gaethje’s toughness a late submission is perhaps his best chance of a finish, but I’ll say this one goes the full five rounds.

After getting back to winning ways with a decision win against Darren Till, Whittaker now goes up against the in-form Cannonier, with some real potential of a title shot in the pipeline for the winner.

This should be an exciting striking battle, with Whittaker technically being the better of the two and also being quicker and having good movement, while Cannonier has settled very nicely into life at middleweight after competing as high as heavyweight and has retained big power in his punches and is physically strong.

While Whittaker’s striking is highly regarded it’s not without it’s flaws though as he can get a bit wild at times and can leave himself open to eating strikes. It’s concerning as he has been dropped on a number of occasions in recent times and he’s been in some real wars, though for the most part he’s shown good powers of recovery and is hard to finish.

Cannonier’s power could trouble him, but I think Whittaker’s superior all-round stand-up ability will enable him to outstrike his opponent here and secure a decision victory.

Both of these heavyweights are coming off a loss last time out, with Volkov having been outwrestled by Curtis Blaydes, while Harris was TKO’d by Alistair Overeem.

Unlike Stefan Struve, who fights elsewhere on this card, Volkov is a tall, lanky heavyweight who will actually use the 2″ height and 3″ reach advantage he has over Harris to it’s fullest extent with long, straight punches and kicks from range.

Volkov also has the cleaner technique here, though Harris is a capable boxer with the kind of power that can put opponents away early.

Other than being the heavier-hitter I don’t really see any other clear advantage for Harris here though. Volkov will dictate the distance this one is fought at, land more frequently with greater accuracy and will maintain a consistent tempo throughout the fight on his way to a decision victory.

The UFC have extended the main card for this event, but even so it’s still a bit of a curiosity why two fresh faces to the promotion in Hawes and Malkoun have ended up making their debuts the pay-per-view.

Dana White does have a soft spot for his Contender Series recruits though and Hawes is one of them. In fact, Hawes actually lose his first fight on that show in devastating fashion courtesy of a head kick KO, but to his credit he showded his strength of character by rebounding with three more wins on the regional circuit and then scored a quick TKO finish in his return to the Contender Series last month.

On the other hand, Australia’s Malkoun is very much an unheralded prospect, having only logged a 4-0 record to date. What we do know is he’s a training partner of Robert Whittaker and has a solid foundation in both boxing and jiu-jitsu, though as things stand it’s a bit early in his career to really assess how he’s going to cope at the highest level.

Perhaps having had to spend more time on the regional circuit will prove to be a blessing for Hawes as he’ll come into this fight with a considerable experience advantage and a more developed skill-set. He’s also as strong as his impressive physique suggests, has a proven finishing record and I think his wrestling ability will aid him on his way to a second round ground and pound stoppage here.

Newcomer Shakirova comes in on short notice for this fight with Murphy after Cynthia Calvillo was forced out due to a positive Covid-19 test.

As is often the case with these debuting late replacements, it’s a tough assignment for Shakirova as Murphy is well rounded and riding the momentum of a three-fight winning streak against the likes of Maro Romero Borella, Andrea Lee and Roxanne Modafferi.

Shakirov does have an 8-1 record though and her main strength is her wrestling, while her striking has developed somewhat, but still remains fairly rudimentary.

I don’t expect Murphy to be too troubled on the mat here and she should be able to exploit Shakirova’s relatively weak stand-up, although given that she’s never been much of a finisher and the Uzbekestan native has yet to be stopped this one could well go to the distance.

This has been a truly jinxed fight from the first time they stepped into the Octagon at the end of February which saw the fight being ended after just 38 seconds when Cutelaba appeared to be hurt by early offense from his opponent, only to then get up immediately afterwards and bitterly complain that he was fine and had just been pretending to be hurt to set a trap for Ankalaev.

Whether that’s really true or not it led to an immediate rematch being called for, but the fight has had to be postponed multiple times since then for Covid related reasons, so hopefully this time it goes off without a hitch.

It’s interesting how the last fight played out as usually it’s Cutelaba who is known for getting off to a good start with high-octane, aggressive action that can overwhelm opponents on the feet or on the mat. However, beyond that early assault he tends to run out of steam and become less potent.

Given that last time out Ankalaev was composed on the feet and willing to meet fire with fire with considerable precision, possesses a better ground game and is comfortable going the distance it feels like he’s well equipped to pick up another win here, and I’ll take him to get it via second round TKO.

🤑 Who should you bet with for UFC 254: Nurmagomedov vs. Gaethje?

Our top rated and recommended bookmaker for UFC 254: Nurmagomedov vs. Gaethje is Sportsbet – JOIN HERE. Other top rated bookmakers include, PlayUp, and SportsBetting.

💰 What are the best bets for UFC 254: Nurmagomedov vs. Gaethje?

To find out our best bets for the full UFC 254: Nurmagomedov vs. Gaethje fight card, read our latest UFC previews and betting tips!

📺 How can I watch UFC 254: Nurmagomedov vs. Gaethje in Australia?

UFC 254: Nurmagomedov vs. Gaethje is a pay per view event (PPV) which Australians can purchase and watch live on UFC Fight Pass or Foxtel.

👊 Which fights are on the card for UFC 254: Nurmagomedov vs. Gaethje?

Read our UFC 254: Nurmagomedov vs. Gaethje preview and bettings tips to find out all the fights and best bets on the card!