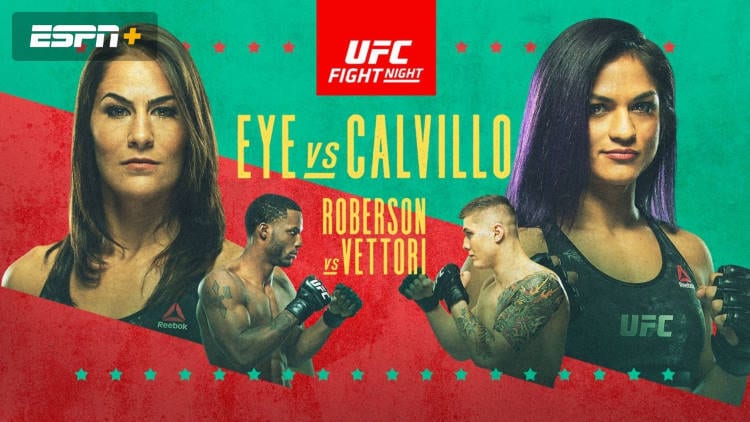 After consistent weight issues at strawweight, Calvillo moves up to flyweight for the first time to fight Eye, a former bantamweight who just so happens to also have missed weight for her last fight at 125lbs!

That speaks to the size advantage Eye will have here, having 2” in height and reach over Calvillo, while also having plenty of experience of fighting bigger opponents during her lengthy spell competing at 135lbs.

That being said, Eye struggled to get anything going during her bantamweight run, while she’s found the going much better at flyweight and has even fought for the title.

Eye’s striking is clearly her strongest suit with crisp, accurate boxing combo’s and good hand speed, though she’s more of a points-based fighter rather than being a finisher.

Calvillo is game in the stand-up department, but she’s not as quick or as technical as Eye, so if this fight remains standing I think she’ll have her work cut out for her.

Calvillo is however a very talented jiu-jitsu player with excellent scrambling and keen finishing instincts via submission, so she poses a big threat if she can get the fight on the mat.

I think Calvillo might have some difficulty getting Eye down though and that will enable Eye to press home her striking advantage and win on the scorecards here.

This fight was previously booked back in May, but was cancelled due to Roberson requiring hospital treatment due to a botched weight cut.  Vettori was so angry about the fight being scrapped that he had to be held back as he unleashed an expletive-laden rant at his opponent back at the hotel lobby afterwards.

That means there’s considerably more heat surrounding this fight than there was previously and so it takes co-main event status here.

Roberson comes from a kickboxing background, but he’s actually sought to use his ground skills more during his UFC run so far and has a few submission victories on his resume.

Vettori can also handle himself on the feet and the mat, as well as being durable, and I think his work rate, forward pressure and better grappling will enable him to win by decision here.

It’s only been a matter of weeks since Borg lost out by split decision to Ricky Simon, yet here he is back again to fight Dvalishvili.

Borg will partly be helped out by the fact he’s only recently moved up to bantamweight, which makes his weight cut easier, but at the same time he is small for the division and will be giving up 2” in height and 5” in reach to his opponent on Saturday night.

Borg is a decent striker, but doesn’t have much in the way of power and is definitely more in his element on the mat utilizing his fast-paced, crafty grappling skills to control opponents.

Dvalishvilli is somewhat reckless on the feet and that can leave him throwing heavy leather at thin air too often, but he excels when it comes to takedowns, and against a smaller opponent like Borg there’s a good chance he’ll be able to do that repeatedly.

Borg will likely have to make do with trying to work for submissions off his back, but while he is certainly capable of that, I think he’ll struggle to get anything going here offensively and will lose out to Dvalishvilli on the scorecards.

Fili has a big experience advantage here, having been competing in the UFC for almost seven years, and though he’s never been able to string more than two-wins together at a time during that period, he has matured as a fighter.

Fili’s striking technique is cleaner these days and he’s less reckless than earlier in his career, while the 29-year-old’s chin remains sturdy, with only Yair Rodriguez having finished him with strikes during his UFC run to date.

Jourdain has only had two fights in the Octagon so far and is coming off a surprise TKO victory over Doo Ho Choi, which demonstrated the 24-year-old’s threat as a tough, aggressive finisher.

I think Fili will prove to be the more savvy, refined striker here though and he can utilize wrestling too where necessary to earn a decision victory.

Two fighters on losing streaks open up the main card, so the stakes are high here as they will both see this as a must-win fight.

Espinosa found success with his submission game while competing on the regional circuit, including demonstrating a penchant for producing brabo choke finishes, but doubts have been cast on his ability to make that work at a higher level after having now twice-in-row succumbed to submission stoppages himself during his three-fight UFC run.

De La Rosa can mix things up on the feet and on the mat to an extent, but he doesn’t stand out in any particular regard and a KO loss last time out, together with the knowledge that a fourth loss in a row will almost certainly spell an end to his UFC career may well take a toll on him mentally.

De La Rosa can pose somewhat of a threat on the mat here by submission, but overall I think at this level of competition Espinosa can handle himself on the mat and will be the quicker, more athletic fighter on the feet too, which will be enough to ensure he gets his hand raised after 15 minutes.