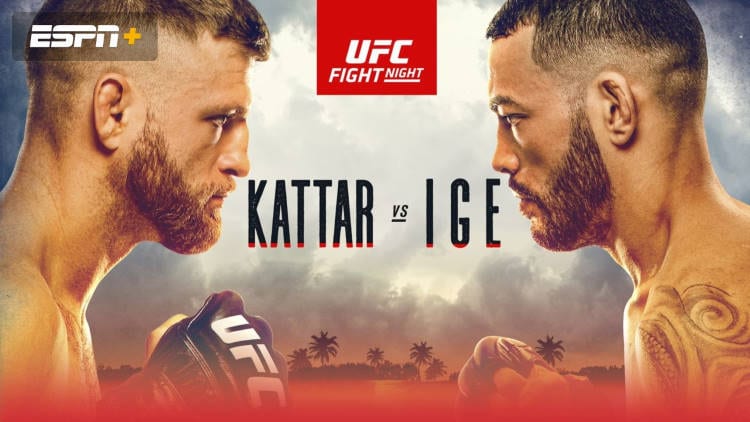 Both of these top-10 featherweight fighters are coming off big wins, with Kattar having TKO’d Jeremy Stephens last time out, while Ige claimed a split decision victory over Edson Barboza.

Both men are strikers first and foremost, and in that regard Kattar has very good boxing and the overall technical edge here.  He puts together a high output offensively, but can also be quite hittable too, so it’s just as well that he has a good chin and has yet to be stopped by strikes in his career.

Ige is a very capable striker who also puts up good numbers offensively, though quite at the same clip as Kattar, and he’s the kind of fighter who generally gets the job done on the scorecards rather than with a big finish on the feet.

I think this will be a close one, but Kattar’s crisper striking and better cardio will allow him to get the better of the exchanges on the feet and while the damage he accumulates could lead to a TKO stoppage in the late rounds, I’ll go with him sealing a decision victory here.

Elliott is coming off a three fight losing streak, the last of which came only six weeks ago, while Benoit’s form has been somewhat patchy with two losses from his last three outings.

This should shape up to be a striker vs. grappler match-up, with Benoit having big knockout power for the weight class, though not being the most refined stand-up fighter, while Elliott is a crafty grappler who will pose a significant submission threat, but has also been caught in submissions himself at times.

Elliott is awkward on the feet and hittable, but nevertheless he’s only been stopped once by strikes in his entire career.  His cardio is a concern, but I like his chances to take advantage of Benoit’s less than stellar takedown defense here, and on the mat he should be in control and I’ll take him to find his way to a submission stoppage in the second round.

This is a well matched bantamweight fight, despite the fact that their recent records are starkly different, with Stamann having only lost one of his last seven fights, while Rivera has lost three of his last four outings.

Rivera’s losses were at the top of the food-chain though against Marlon Moraes, Petr Yan and Aljamain sterling though, and it’s worth remembering he had won 21 of his previous 22 fights before that.

Rivera is a good striker and though he doesn’t have many finishes on his record he does hit hard enough to command respect, keeps a high tempo and is very durable, while also having strong takedown defense.

Stamann is also a worthy striker, though he does like to mix things up more.  However, I think he’ll have difficulty getting Rivera down here, so he’ll have to make his impression felt on the feet too.

This has the makings of a highly competitive fight, but despite his recent record I still believe Rivera still has a lot to offer and can battle his way to a decision victory here.

McCann has put together a nice three-fight winning streak in the UFC of late, while Santos lost her debut by split decision back in February of 2019 and is only now making her return.

Santos is a good technical striker though and has amassed a solid number of stoppages in that regard throughout her career.  McCann’s striking defense isn’t the best either, so she will be able to find a home for her offensive output.

McCann is an extremely tough fighter though and will be willing to exchange on the feet, but she also can mix things up with takedowns and control on top too and that’s likely to be an important factor here to help her on her way to a decision victory.

Alhassan is a lethal finisher with stoppage victories via strikes in all 10 of his MMA victories to date, including four inside the Octagon.

Lazzes is a UFC newcomer, but he also has a hard-hitting reputation on the regional scene with eight T(KO) stoppages from nine wins, so we should get fireworks here for as long as the fight lasts.

A big concern for Alhassan is having been out of action for the best part of two years, but he’s a fearsome striker and has proven himself at a higher level than Lazzes, so I think he’s going to land something big in the early striking exchanges and lay his opponent out.

To find out our best bets for the full UFC on ESPN 13 fight card, read our latest UFC previews and betting tips!

👊 Which fights are on the card for UFC on ESPN 13?

Read our UFC on ESPN 13 preview and bettings tips to find out all the fights and best bets on the card!