UFC on ESPN 14: Whittaker vs. Till Predictions & Betting Tips 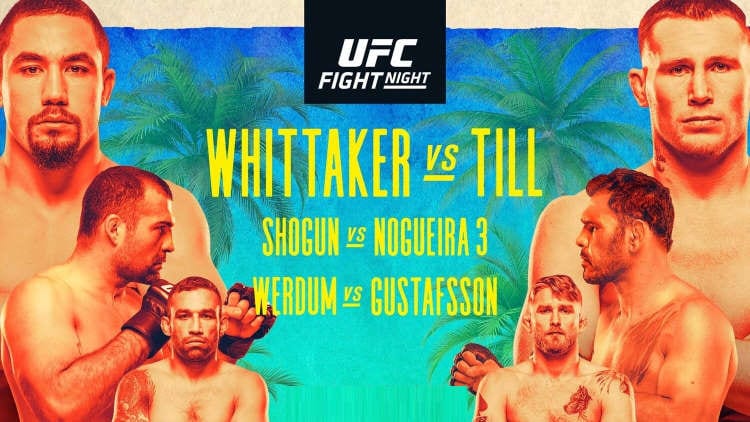 UFC on ESPN 14: Whittaker vs. Till Predictions

Robert Whittaker vs. Darren Till

This has all the makings of an exciting stand-up war, though there are also potentially questions about how both fighters are doing from a physical and psychological standpoint.

After all, the injury-prone Whittaker hasn’t fought since losing his title last October, and admitted earlier this year that he’d become burnt out mentally and almost considered quitting the sport, though he claims he’s since rediscovered his desire to compete.

As for Till, he confessed prior to his middleweight debut last time out that he’d been so scared to fight that he almost faked an injury to get out of it.  Its possible Till’s split decision win over Kelvin Gastelum has slayed those demons and he seems in good spirits, but lets not forget that just last year he was brutally KO’d by Jorge Masvidal and then seemed to go off-the-rails for a while in his private life.

Skill-wise though, this is a great match-up.  Its a fight that’s likely to be waged on the feet and Whittaker will look to make the best of his fast hands and high volume striking, while Till isn’t as active offensively, but still hits hard, has clean technique and good distance management.

This is a big test for Whittaker, mentally as well as physically, but I believe he can get the better of Till here, who has made the most of his size advantage against smaller opponents, but will find the former champion a tougher nut to crack.  Whittaker’s higher output and aggression will allow him to get the better of a hard-fought battle and earn a decision victory.

Nogueira has stated that he’ll retire following his trilogy fight with ‘Shogun’, who he has lost to twice in the past.

While he clearly has the heart of a warrior, on paper it doesn’t seem like such a great idea for Nogueira to be competing again.  After all, he’s now 44, has had numerous injury problems over the years and has lost four of his last six fights, including being KO’d in the opening round of his last bout.

The 38-year-old Shogun is not the fighter he once was either and has also been ravaged by injuries at times, but nonetheless he fought through a rough spell of losses and has actually had a decent run in the past five years, piecing together four wins and a draw from his last six fights.

While not as agile as he was in his prime, Shogun still possesses big knockout power and will probably appear quicker and more mobile than Nogueira, who is very stiff in comparison.

Nogueira is a crafty old veteran and may be able to make this one competitive if he had focus on extended grappling exchanges, but I fear that on the feet there’s a good chance that he gets caught here and ends his career on a KO loss.

After back-to-back losses at the top end of the 205lb division, Gustafsson has now opted to try his luck at heavyweight, where he’ll immediately head into a big fight with a former champ in Werdum.

The last few years have been rough for the 42-year-old Werdum, who was KO’d by Alexander Volkov in 2018, then suspended for two years after testing positive for steroids, followed by a very underwhelming performance upon his return in May during a split decision loss to Aleskei Oleinik.

Werdum’s cardio was poor in that outing and his usually assured striking appeared very rusty too, so that will give Gustafsson confidence heading into this bout, and though he’s the one moving up a division he’ll actually enjoy a 1” height and 2” reach advantage here.

That will suit Gustafsson well as he likes to fight from range with crisp, clean, straight punches down the pipe, while he also has good movement, footwork and the cardio to keep a good pace for all three rounds.

How much Werdum can have stepped up his cardio and sharpened his striking over the past couple of months in the middle of a pandemic remains to be seen, but his best bet here may be to try to use his excellent grappling to try to submit Gustafsson, but it’s likely he’ll find the Swede hard to take down.

If Werdum somehow manages to rediscover the form that took him to the title then this could be a really good fight, but at this stage in their careers it feels like Gustafsson should have the edge here and outstrike the Brazilian star to earn a decision victory.

Two in-form fighters here, with former strawweight champion Esparza being on a three-fight winning run, while Rodriguez is undefeated in her 14-fight career to date – albeit with two of her fights in the UFC so far having ended in a draw.

Esparza’s striking is functional, but she’s likely to be outgunned if this one remains upright as Rodriguez has a hard-hitting muay thai style that can dictate the stand-up action, though it should be noted that most of her finishes came earlier in her career.

However, Rodriguez’s ground game is weaker and that gives Esparza a big window of opportunity to make good use of her strongest suit – her wrestling to grind out a decision victory here.

Oliveira is a very entertaining fighter to watch with his all-action style, whether on the feet or the mat, and it makes him dangerous, but also can expose weaknesses in his defense and cardio at times, particularly on the mat where he’s been caught in fight-ending submissions several times in his career.

As it happens Sobotta does have a history of submission victories, but during his second run in the UFC it’s his striking that’s helped him on his way to having a more successful run.

That being said, Sobotta was TKO’d in his last Octagon outing and that was over two years ago, so that’s far from ideal and I think that while he’ll largely make it a competitive fight, Oliveira will have too much for him overall and battle his way to a decision victory.

While he’s best known for producing out-of-the-blue submission victories against the odds, Craig has actually managed to sharpen up his previously very pedestrian striking skills too, as evidenced by fighting his way to a split draw with Mauricio ‘Shogun’ Rua last time out.

Like Craig, Antigulov is also at his best on the mat, but rather than tapping out his opponents in the dying stages of a fight, he’s adept at getting the job done early, with a string of first round submissions to his name.

However, on the feet Antigulov is vulnerable and he’s actually been TKO’d and then KO’d in his last two UFC fights.  Craig doesn’t really wield the kind of power to be a big threat in that regard, but if he concentrates on just outstriking Antigulov rather than grappling then I think he could gain the upperhand and emerge with his hand raised after 15 minutes.

To find out our best bets for the full UFC on ESPN 14: Whittaker vs. Till fight card, read our latest UFC previews and betting tips!

Australians can watch UFC on ESPN 14: Whittaker vs. Till live on UFC Fight Pass.

👊 Which fights are on the card for UFC on ESPN 14?

Read our UFC on ESPN 14 preview and bettings tips to find out all the fights and best bets on the card!