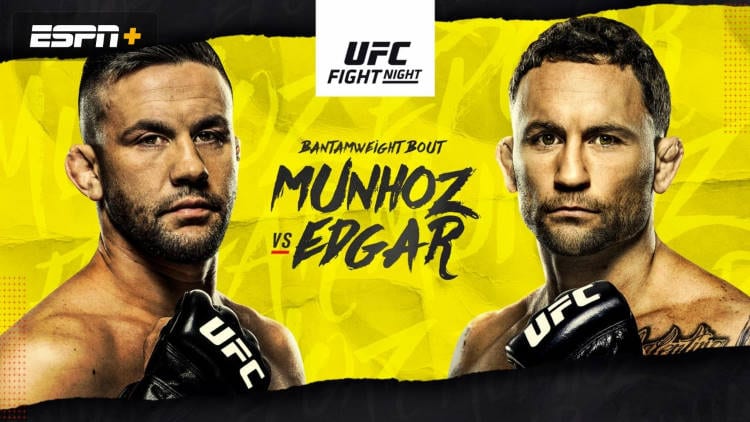 Edgar finally makes the move down to bantamweight on Saturday night after a few delays, coming off the back of a disappointing first round TKO loss to The Korean Zombie at featherweight back in December.

Edgar has been a consumate professional throughout his career and is always in great shape, so even at 38 he’s still a hard fight for anyone, but the fact that up until 2018 he’d never been stopped and has since been finished twice by strikes is a warning sign that even he can’t fight the ageing process.

Nevertheless, Edgar still has speed, cardio and a vast amount of experience fighting five-rounders to draw on here, in addition to being a very well-rounded fighter with crisp boxing (aided here by a 3.5″ reach advantage) and very good wrestling.

However, despite the drop down in weight Edgar is likely to be outgunned here in terms of sheer power as Munhoz has put away both former champion Cody Garbrandt and Bryan Caraway with first round strikes over the past couple of years with strikes. Really though, the majority of Munhoz’s finishes have come via submission, in particular thanks to possessing a deadly guillotine choke.

I don’t really see Munhoz having much joy with catching Edgar in a fight-ending submission though as ‘The Answer’ is too smart and well versed on the mat to fall for that.

It’s worth bearing in mind that Munhoz tested positive for Covid-19 back in July, and though he didn’t appear to have much issue with it at the time, it does bring up the question of how well his cardio will hold out if Edgar does drag this fight into rounds four and five, as is often the case for him.

Still, we’ve seen Edgar hurt in the past – his classic fights with Gray Maynard were all about him surviving after being badly rocked – and these days with his chin being weakened, in addition to undergoing a draining weight cut, I do think a hard-hitting fighter like Munhoz may well be able to get the finish here by TKO in the second round.

After a single fight at heavyweight, which he lost by split decision to Ben Rothwell, OSP drops back down to light-heavyweight to fight Menifield, who lost for the first time in his ten-fight career last time out and comes into this one on short notice.

In all honesty, OSP has been a bit of a frustrating fighter to watch over the years. He appeared to have a lot of athletic potential, is well sized for the division (he’s got a 3″ height and 4″ reach advantage over Menifield here) and intriguingly has demonstrated a remarkable knack for finding finishes via the rare von-flue choke, but that aside he’s not shown much development over the years.

His striking in particular is quite one-paced, not very cohesive, and despite having power in his punches, too often he just relies on a low-output diet of kicks from range and little else.

Meanwhile, Menifield has ferocious power and he will be much more aggressive as he looks to land a fight-ending bomb – which has led to all nine of his career victories coming inside the first round.

On the downside, it’s a classic case of running out of steam when he’s unable to get the job done early, and I think OSP may well be able to survive that early onslaught, at which point his slow-paced style should ensure he has the cardio advantage and could either outpoint Menifield on the feet for the remaining two rounds, or take advantage of his tiring opponent by utilizing his solid ground game to finish by submission.

With both of these fighter barely clinging onto a place on the roster after losing runs in the UFC it’s a bit of a headscratcher why they are so high up the fight card, but at least with so much at stake it may make for a spirited scrap.

Whether Prachnio’s chin can actually handle a spirited scrap is up for debate though since in his two UFC fights to date he’s been put away inside a single round. His pre-UFC fights showed him to be a dangerous finisher, but at a higher level his distinct lack of interest in the defensive aspect of his game has cost him dearly so far.

In all fairness, Rodriguez was KO’d in 69 seconds last time out, but in general he takes less risks defensively than Prachnio, and significantly, despite there only being an inch in height between them, Rodriguez actually has a huge 8.5″ reach advantage, which will help him to keep his opponent on the end of his solid punches as he too looks for the stoppage.

Whatever happens I think we’ll probably see this one end inside the distance and Rodriguez looks the safer pick to emerge with his hand raised here by KO, and likely sooner rather than later.

Let’s just get this out there straight away – this fight doesn’t really make any sense.

Former Invicta FC fighter Agapova made a successful start to her UFC career by quickly submitting Hannah Cifers to take her career record to 9-1, while Dobson has lost her last three fights in the Octagon, was KO’d in 40 seconds last time out and has only assembled a 3-4 record overall.

You have to feel for Dobson as this is just a terrible match-up to try and somehow get back to winning ways as she’ll be outgunned on the feet and out of her depth on the mat here, leading to a first round submission finish.

This should be a fun stand-up battle between to well matched welterweight’s who have the ability to finish either other inside the distance.

Of the two I’d say Rodriguez carries the bigger one-punch power and he’ll come into this one with plenty of confidence after having won eight fights in a row, including two in the UFC so far.

That being said, Sato has stopped many of his opponents too and I actually think he could have the technical edge here, as well as a speed advantage, and with a higher volume output too I’m going to take him to find opportunities to land big strikes and emerge with a second round TKO stoppage victory.

Matthew Semelsberger vs. Carlton Minus

To find out our best bets for the full UFC on ESPN 15: Munhoz vs. Edgar fight card, read our latest UFC previews and betting tips!

👊 Which fights are on the card for UFC on ESPN 15?

Read our UFC on ESPN 15 preview and bettings tips to find out all the fights and best bets on the card!