Every fight that has Gaethje in it is virtually guaranteed to be a thrilling stand-up war and it’s certainly hard to imagine that going up against Barboza is going to buck that trend.

However, while Gaethje is all about relentless offense, pressure and aggression, absorbing blows with his granite jaw to lands some of his own, Barboza is more of a striking technician who will be looking to pick his moments to land big shots and has particularly brutal leg kicks.

Barboza doesn’t respond particularly well to being put on the backfoot, so that bodes well for Gaethje, but his time in the UFC has proven that his chin can be cracked and the Brazilian certainly has the skill to test it.

Nevertheless, I do feel Gaethje’s willingness to go to war, together with the fact he can just about match his opponents leg kicks and has a solid wrestling base if needed, will lead to him just having the edge here in what’s sure to be a brutal battle that will end with a third round TKO stoppage for ‘The Highlight.’

A former two-division WSOF champion, Branch is definitely at his best on the mat and shows good control on top and possesses a submission threat.

However, Hermansson can wrestle and he has some particularly beastly ground and pound, while upright he’ll push a hard, aggressive pace that should give him a distinct advantage against the significantly lower output of Branch.

I think Hermansson will look to trouble Branch mostly on the feet here, at least initially and with his finishing instincts and power I favour him to add another TKO loss to his opponent’s record late in the fight.

Johnson’s inconsistency is somewhat baffling as there’s a lot to like about his game.  He’s a crisp striker who works well on the outside and has very impressive hand speed as he puts together combinations, plus good movement to go with it.

Emmett isn’t as refined or as fast, but he can suddenly explode into range with powerful hooks and cause problems for those who don’t know how to deal with that.

I think Johnson will be able to though.  He can work on the counter if required and assuming he can steer clear of the telegraphed knockout blows then I think he should be able to land the cleaner shots and come away with a decision victory.

Two popular top 10 strawweights battle it out here and it’ll be interesting to see how their two opposing styles merge together.

Kowalkiewicz is the more straight-forward fighter of the two.  She’s a pressure based fighter who will focus on boxing and land at a high clip, though without much in the way of knockout power.

Kowalkiewicz is also strong in the clinch, but on the mat she’ll be looking to get upright as quickly as possible.

As for Waterson, she’s lighter and more evasive on the feet, using movement and kicks from range, while on the mat she’s a crafty veteran who always has a chance to find a submission finish.

Waterson has more tools, but I think Kowalkiewicz’s volume striking could pay dividends on the feet here, while she’s strong enough to deal with Waterson in the grappling exchanges and keep this one upright more often than not to earn a decision win.

Craig is very much a submission specialist first and foremost and he’s proven multiple times that he’s a real threat on the mat even from his back and only needs one opening to lock up a finish.

On the other hand he’s got significant limitations in other aspects of the game and he could be facing real issues on the feet against Nzechukwu, a 6ft 5” 205lb’er, who has an unusually long 83” reach.

Nzechukwu is still fairly new to the sport with only six fights on his record, but he moves well for his size and packs big power, which should give him a big advantage on the feet.

We don’t really know what his ground game is like however, so it’s imperative that he avoids being taken down by Craig or else he might find himself in big trouble.  I think Craig’s takedown’s won’t be good enough to get him down though and he’ll make him pay on the feet with a second round TKO stoppage.

This is shaping up to be an entertaining battle between two talented featherweights on the rise at this moment in time.

Moraes is the more experienced of the two and is a tough customer who will look to apply pressure with good technical striking.

Yasuff is a little more green, but he still shows lots of potential and is an athletic striker with big power who will burst into dangerous offensive flurries.

It’s a nicely balanced fight, but I think Moraes is a little more polished overall at this stage in their careers and will edge out the striking battle to claim a decision victory. 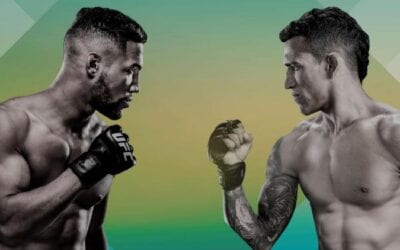