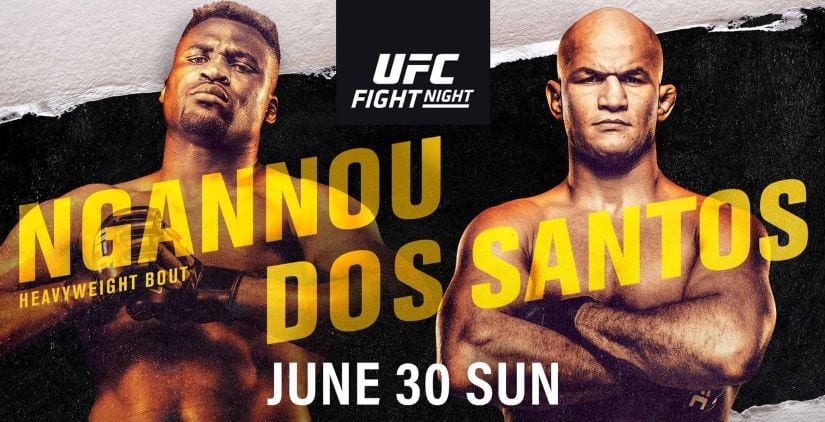 An excellent heavyweight fight tops the bill at UFC On ESPN 3 between a former divisional champion in dos Santos and an ex-title contender looking for another shot at the belt in Ngannou.

Both men have demonstrated excellent knockout power over the course of their UFC tenures, though in terms of raw KO potential I do have to lean towards Ngannou, who is a true one-punch knockout artist and is also the naturally bigger, stronger man here.

That being said, while Ngannou’s boxing is reasonable, it’s not nearly as refined as dos Santos who is light on his feet, moves in and out of range effectively and can piece together crisp combinations, whereas Ngannou tends to rely more on that one big shot.

I’d also say dos Santos has a significant cardio advantage here, so if this five-rounder gets out of the first few rounds then that definitely favours the Brazilian.

Still, JDS’s chin isn’t as strong as it once was and in a five-round striking battle like this Ngannou is going to have his chances and I think he’ll emerge with a KO victory here inside of 10 minutes.

These two have met once before, some six years ago when Benavidez TKO’d Formiga with knees and punches just over three minutes into the fight.

Benavidez has continued to be one of the leading flyweights in the UFC in the years since, winning eight of his last 10 fights, while Formiga to his credit can actually match that record exactly and has improved over time.

It’ll be interesting to see how the rematch plays out because Benavidez isn’t traditionally much of a finisher on the feet and now at 34-years-of-age he’s lost a little bit of his sparkle and is not quite as sharp as he once was in terms of his speed, movement and striking.

In all fairness though, despite honing his striking skills, Formiga still has absolutely no record at all of finishing fights on the feet, though he is a real threat with submissions.  That being said, Benavidez is a well-rounded veteran and I don’t see him being tapped out.

So I suspect a decision is the most likely outcome here and with Benavidez being the more active, quicker and more ffective striker, while also having the wrestling skills to ensure the fight stays upright more often than not, I still favour him to edge out a win on the scorecards here.

Martin’s been steadily rising up the ranks for some time now and improving his game as he does, to the extent that he’s a fairly well-rounded fighter now, whose striking has developed enough that he could pose an ageing Maia problems in prolonged striking exchanges.

Of course the real issue here though is whether he can prevent Maia from taking him down and either completely shutting him down on the mat or wrapping him up in a fight-ending submission hold.

We’ve seen several fighters recently who have had the wrestling capability to do that and the results have been big, with Maia quickly running out of ideas and running out of steam when he can’t get the fight to the floor, but those have been truly exceptional wrestlers and Martin doesn’t fit into that category.

The reality is that Martin’s biggest threat is on the mat too and that’s just not going to be enough against someone of Maia’s caliber and so I’m taking the Brazilian veteran to control the action for extended periods on the mat to earn a decision win.

This is an interesting bit of matchmaking between an up-and-coming prospect in Roberts and a tough veteran in Pichel.

Pichel’s career has been rather unfortunate.  He’s only lost twice in 13 career fights, but at 36-years-old he’d have had a lot more fights under his belt if it hadn’t been for a three-year absence due to injury woes, and another year out recently that was partly due to being the victim of a hit-and-run incident.

That all has to have taken a toll on him, but Pichel is still a tough grinder with good wrestling, skills that can still be effective at this stage in his career.

Roberts on the other hand is 25 and with his lanky 6ft 1” frame he can strike from range, is good in the clinch and poses a submission threat.

Roberts definitely shows promise and is generally favored to win the fight, while Pichel’s age and injury issues are a cause for concern, but nonetheless I feel his superior wrestling and grinding approach could pay dividends here and see his hand raised by way of a judges decision.

He might be coming off a loss, but Dober has compiled a solid record in the UFC that’s better than what may have been expected when he first set foot in the Octagon.

A durable volume striker on the feet, Dober has gradually added more strings to his bow over time and his improved wrestling could be a factor on Saturday night.

Reyes is an exciting brawler and has racked up some big KO’s, which makes him a threat here, but he doesn’t have much of a ground game to speak off, and that may well be his undoing here.

Dober’s got a stout chin and won’t be out of his depth on the feet, but using his wrestling to get this fight to the mat marks his best bet of emerging victorious via decision.

Thanks to his penchant for picking up last gasp submissions out-of-the-blue, Craig has perhaps managed to cling onto his spot on the UFC roster longer than he otherwise would have.

Beyond his opportunistic submission game, Craig doesn’t really stand out in any regard and is rather unathletic, in constract to Menifield who is a powerful physical specimen and a big hitter to boot.

If Craig can bring Menifield down then by all means his tried and tested record suggests he can produce a tapout, but on the feet I think he’s going to be at a big disadvantage, and with Menifield also having some grappling to prevent easy takedowns I like his chances of taking out Craig early here.