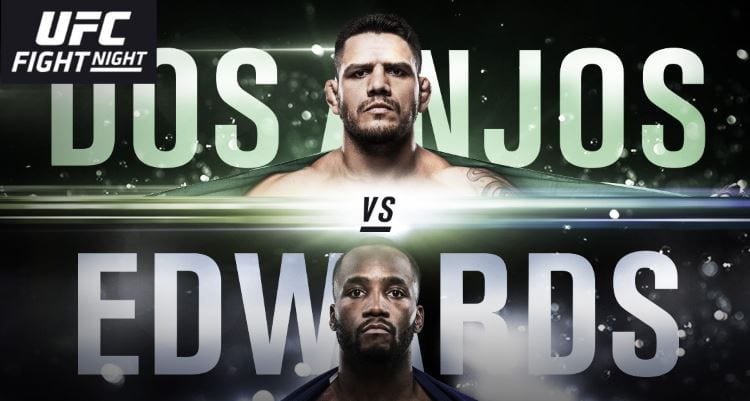 The main event looks to be a very close fight pitting former lightweight champion Dos Anjos against the in-from Edwards, who is riding a seven-fight winning streak in the welterweight division.

Both fighters are well-rounded and well-conditioned too, so this is going to be a hard fought encounter wherever the fight goes and for however long it lasts.

Dos Anjos is an excellent pressure fighter who can trouble opponents with high volume combinations, although he’s not a particularly heavy hitter for a welterweight.  Nevertheless, with a very strong clinch game, fairly solid wrestling and well versed Brazilian Jiu-Jitsu, he’s a formidable opponent.

Edwards has many strings to his bow too, and while he started out more as a potent striker, he’s actually come on to develop a dominant wrestling game too that’s become a key component in his game during his UFC tenure, and he is more of a natural 170lb’er than RDA too.

This could end up being a razor-close decision kind of a fight, but I’m leaning slightly towards RDA here as he’s the more active striker and I think Edwards is going to struggle to effectively counter his high volume, pressure and work rate enough over five rounds to sway the judges in his favour.

A large, athletic heavyweight with good power, Harris has had his moments in the UFC, though there’s a sense that at times he’s not making the best use of his natural ability and fights at a slower tempo than he should.

The 42-year-old Oelinik isn’t going to be pushing the pace either, but he is tough as old boots and he has a large advantage here if he can get the fight to the mat as he’s one of the division’s foremost submission experts and that’s an area Harris will struggle with.

If Harris keeps this one standing he’ll do well, but I like the crafty veteran Oleinik’s chances of finding a way to get this one to the mat and then tying Harris up in knots from there to secure a submission victory.

Hardy has yet to really impress in the UFC, with his victory last time out being against an opponent in Dmitry Smolyakov that even Dana White indicated post-fight wasn’t worthy of a place in the UFC.

Obviously as a former NFL star, albeit a disgraced one, Hardy has athletic potential and he certainly hits hard, but it remains to be seen whether he’ll be able to improve upon his cardio issues and develop a broader, more well-rounded skill-set.

Adams has been wanting this fight for a while and he’s moves well for a big heavyweight, has finishing power and importantly can wrestle too.

That may well be key here as there’s been no evidence as yet that Hardy has much to offer on the mat.  There is a concern that Adams may let his emotions take over and just slug it out, but if he fights with a gameplan I think he can get Hardy down and punish him with ground and pound until the second round TKO stoppage.

Both of these two lightweights have had good runs in the division, but recently come unstuck in brutal fashion against high level opposition.

The fact that both men are dangerous on the feet and on the mat has certainly helped their cause during there time in the UFC and that should make for a competitive fight here.

Vick’s height and reach have helped him operate effectively on the outside, but in recent times he’s been exposed when fighters apply a lot of pressure and that suits Hooker’s style, not to mention that at 6ft, the New Zealander is also taller than average for a lightweight and is only giving up 1” in reach to Vick.

That’s all good news for Hooker, who also has a solid chin and should be able to put Vick on the back foot here and with his heavier hands that pressure will help him to a second round stoppage victory.

Hernandez perhaps bit off more than he could chew when he lost out to Donald Cerrone in his last Octagon outing, but he still shows a lot of promise and at 26 has plenty of room for further growth.

Trinaldo will be a tough test as even at 40 the Brazilian veteran is still a real handful in the division with his physical strength and good counter-striking.

Hernandez is more of a pressure fighter who will burst forward with gusto throwing everything but the kitchen sink at his opponent, but that does make him hittable and could open doors for Trinaldo to make an impact.

Hernandez has also shown himself to be strong in the clinch and is good on the mat too, but Trinaldo won’t be easy to handle for as long as his cardio lasts.

There’s the potential for Trinaldo’s counters to be the defining aspect of this fight that’ll discourage Hernandez from driving forward, but instead I’ll take the younger fighter’s pace and offensive flurries to earn him a decision victory.

These two have met once before and on that occasion it was Arlovski who emerged victorious by knockout, but it’s not worth reading too much into that given that it happened 11 years ago.

Certainly Arlovski remains the more technical striker though, but he has far more wear and tear than Rothwell and is gradually slowing down at 40-years-old, so that’s going to make him more cautious against his bigger, more durable opponent with finishing power.

Rothwell plods forward and has an awkward style that’s at time more effective than it has a right to be, but Arlovski will hope to pick him apart on the counter and win on the scorecards.

I think Rothwell will press the action more here and if he can land he can hurt Arlovski and so I’ll take him to win by second round KO.

How to Pick a Winning Horse