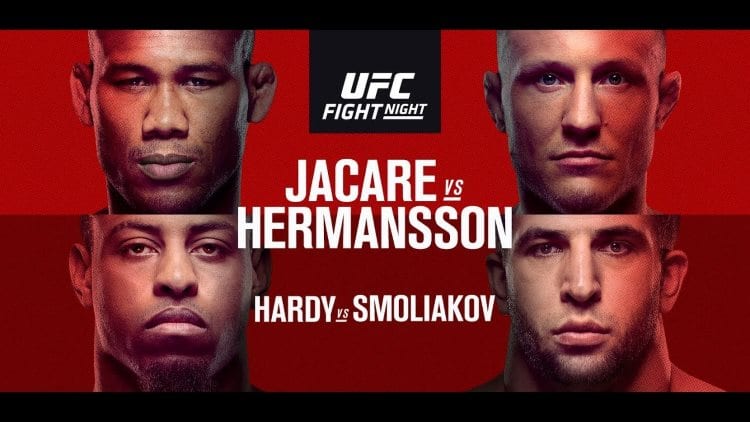 Hermansson steps in her as a late replacement for Yoel Romero riding a wave of momentum, having racked up three wins in a row, including a 49 second submission stoppage of David Branch at the tail-end of last month.

Hermansson has been a finisher throughout his career and is particularly dangerous when he’s in top position, landing heavy ground and pound or working for a submission.

However, this is a fight in which he might struggle to make much of those skills as he’s facing one of the world’s most elite BJJ experts in Jacare, so trying to make something happen on the mat could well end in disaster as the Brazilian ties him up in knots.

Hermansson does still have a chance on the feet though as ‘Jacare’ is not a complete striker and at 39 neither is he as sharp as he once was, but he has improved his stand-up game over time and I think he’ll prove to be the fighter on the front foot here as he gets the better of the action wherever the fight goes, leading to a second round submission stoppage.

Former NFL bad boy, Hardy’s UFC debut was a bit of a train wreck, so he’s quite lucky to be given the co-main event spot here.

Smoliakov seems like a carefully selected opponent here.  He’s already had an uninspiring two-fight stint in the UFC and left with two losses on his record, while since then he spent two years out of action and then returned for an easy win against a weak opponent on the regional circuit.

Smoliakov is also used to going for the quick finish, and that’ll suit Hardy, who has similar intentions and whose dubious cardio could be exposed by a more patient fighter.

Hardy’s game is very raw at this stage, but he’s clearly got very heavy hands and I think he’ll clobber Smoliakov early here and earn a KO finish.

Perry took this match-up on a month’s notice and it could prove to be a solid contender for ‘Fight Of The Night’ honors given these two fighter’s action-orientated styles.

Both men will happily swing for the fences on the feet and Oliveira will enjoy a 5.5 inch reach advantage in the exchanges, though Perry is perhaps the harder one-punch hitter of the two and has a strong chin to go with it.

Oliveira’s all-round game is better though, being effective in the clinch and also possessing a takedown threat that will trouble Perry, whose ground game leaves a lot to be desired.

If it’s just an all-out brawl I’d favor Perry here with his punching power, but ‘Cowboy’ should mix things up more and put him out of his comfort zone at times, leading to a decision victory.

A few years ago this fight might have been easier to pick, but there’s been a visible decline in Teixeira’s speed and durability as he’s approached his 40th birthday.

Teixeira is still a heavy hitter and has good wrestling to back it up, but he’s more plodding and easier to hit than he was in the past, which will give Cutelaba hope of picking up a win over the grizzled veteran.

Like Teixeira, the 26-year-old Cutelaba has plenty of power in his punches, he’s aggressive going forward and with his sambo and Judo background he’s not just a one trick pony.

This is a tough one to call as there’s a sense that Teixeira realizes his stand-up skills are diminishing and may look to lean more heavily on his wrestling and submission threat, but I think the more youthful Cutelaba may prove to be something of a handful for him and his aggression and speed advantage will see him emerge with a first round finish.

It’s been almost a year since Lineker’s last Octagon outing, returning to face an in-form Sandhagen, who has racked up three stoppage victories to date since joining the UFC last year.

Lineker’s style is well established by this stage, being a marauding power puncher with a seemingly impenetrable chin, which allows him to keep the offense flowing without fear of getting starched as he lets his ‘Hands Of Stone’ fly.

Sandhagen will have an 8” height and 3” reach advantage here and he’s proven he can be dangerous on the feet and on the mat, making him the more well-rounded of the two fighters here.

It’s possible Sanhagen’s movement and length could frustrate Lineker, but I’m not convinced he’ll have the patience to pick his shots here and will engage more often than he should, which will cost him as the Brazilian finds a home for his thunderous strikes and takes out his opponent in the second round.

Roberts got his break in Dana White’s Contender Series and is apparently one of the UFC president’s most hotly tipped prospects from it so far, but it’s still early days for him.

He’s unusually lanky for a lightweight at 6ft 1”, but as it happens Gifford actually manages him in that department and in reach too.

Roberts should be better than Gifford in most areas though, particularly in the clinch and on the mat, though he has to be mindful that his opponent does pose a submission threat, accounting for the vast majority of his finishes.

Gifford has also been known to get caught in submission himself though and I think that’s likely to be a solid route to victory for Roberts here, leading to a second round stoppage.