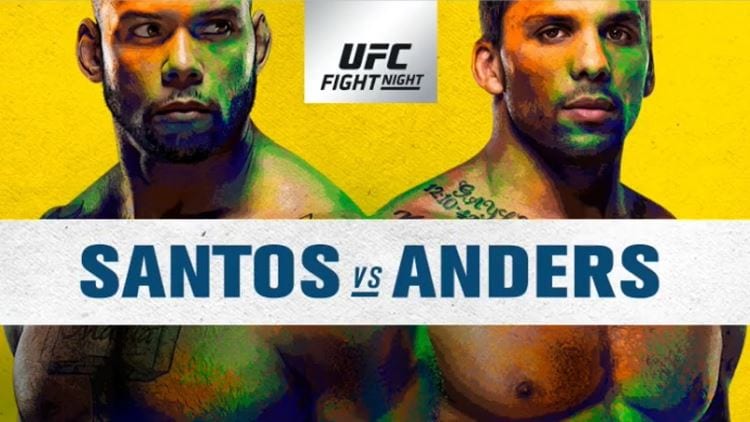 Anders comes into this fight as a late replacement on just 6 days notice, while Santos was only drafted in a month ago too for this injury-jinxed main event match-up.

Both fighters are extremely dangerous, so potentially this fight could end at any moment, but given the fact that Anders is coming in on such late notice it’s unlikely that he’s going to be stepping on the gas from the opening bell.

However, I think that will tend to favor Santos more as he works better from range with a hard-hitting assortment of kicks, and while Anders might be tough to put away, that’s the kind of work that could put the Brazilian firmly ahead on the scorecards.

Santos’ vulnerability to being hit while striking is a concern her as Anders has fight-ending power, but overall I think he should be able to land more meaningful blows here and potentially find a finish as his opponent tires.

Coming off his biggest win to date over Carlos Condit, Oliveira now faces a less well known but still dangerous opponent in Pedersoli, who claimed a win in his UFC debut and has only lost once in his 12 fight career to date.

Oliveira looks to be the more well-rounded fighter here and is a proven finisher wherever the fight goes, though he’s particularly strong in the clinch and on the mat with big ground and pound and is a submission threat too.

Pedersoli is a good striker, though not a particularly heavy-hitter and when he does find a finish it tends to be via submission.  His takedowns aren’t the best though and I think he’s generally  going to come off second-best here as Oliveira will fight at a higher tempo with more aggression and emerge with a third round TKO victory.

At the age of 42, having been out of the Octagon for almost two years and coming of a TKO loss, Nogueira still hasn’t been convinced to hang up his gloves just yet.

Alvey could change that though.  He’s racked up two wins since moving up to 205lbs and though his output is low, he has big power in his fists and that could spell trouble for Nogueira’s weakened chin.

Nogueira’s skill on the mat could still be a problem for Alvey, but I think the aging Brazilian is going to struggle to get the fight there and Alvey is eventually going to catch him with a big punch that ends his night.

Since first losing his bantamweight title back in 2014, Barao has struggled to rediscover the form that kept him unbeaten for so many years, and since then he’s only won two of his past six fights.

Now he’s looking to get back on track against UFC newcomer Ewell, who is coming in off a four-fight winning streak on the regional scene and has won 11 of his 13 career victories by either strikes  or submission.

Ewell is a tall fighter for the weight class with a big reach advantage and has proven to be capable of ending fights on the feet and with submissions, but technically he really isn’t on the same level as Barao in any facet of the fight.

Barao is definitely not the fighter he once was, but I still believe that his superior skills should be enough to see off an up-and-comer like Ewell, and I see him being slicker on the feet and then punishing him on the mat for a second round submission victory.

After a win on Dana White’s Tuesday Night Contender Series, the now 10-0 Rodriguez gets a chance to show what she can do in the UFC against Markos, who has been continually alternating between wins and losses during her time in the Octagon so far.

Markos is at her best as a grappler, while her striking is fairly mediocre, but at least enables her to make a fight of it wherever the fight goes.

Rodriguez is very much a stand-up fighter and her muay thai has proven to be effective so far and should make for a tricky fight for Markos if she can’t get this fight to the mat.

It’s tempting to pick Rodriguez here as Markos hasn’t had the best record against strikers of late, but despite her patchy, inconsistent record she is by no means an easy first fight for the newcomer and I think her wrestling could lead to her to a win on the scorecards here.