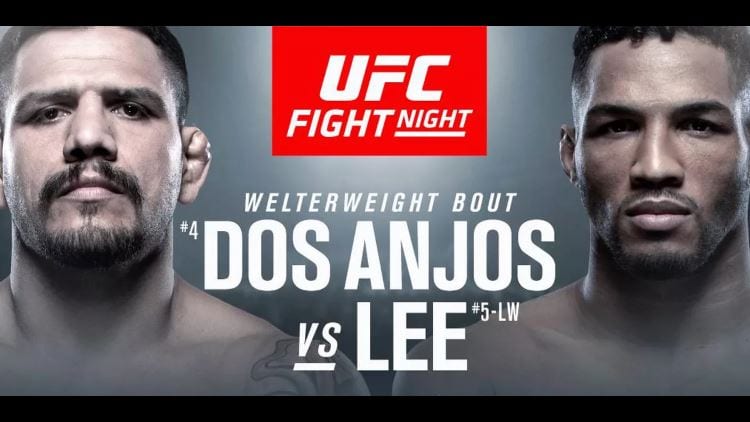 Lee moves up to welterweight for the first time and it just so happens he’s facing a former lightweight champion in dos Anjos, who is looking to rebound from back-to-back losses.

After a good start at welterweight RDA has come undone courtesy of dominant wrestlers in Colby Covington and Kamaru Usman, so he might not be thrilled about facing yet another talented, athletic one in Lee.

Dos Anjos can never be overlooked though as his overall skill-set is too well-rounded and his pressure game can be a real handful as he comes forward aggressively with flurries of hard punches and kicks without exposing himself too much defensively, while his clinch game is very good, and he has good BJJ too.

Despite having a 7” reach advantage, Lee’s stand-up is perhaps not refined enough yet to keep RDA at bay, so he’d be wise not to linger there, instead working on keeping the pressure up with his wrestling, while he will also be a threat with submissions too.

There’s question marks about how Lee will adapt to life at 170lbs, and RDA will push as hard as he can for the full five rounds.  However, while I don’t expect him to be controlled quite as much as he was in his last two outings, I do think the Brazilian will struggle with Lee’s superior wrestling, leading ‘The Motown Phenom’ to a decision victory.

After starting out as a heavyweight winning TUF Brazil Season 3, Carlos Jr dropped all the way down to middleweight, and has made a home for himself there, currently riding a five-fight winning streak.

Carlos Jr is a serviceable striker, but has no great interest in doing so as it’s really the fact that he’s a good wrestler with a strong submission game that’s got him to where he is today, with eight of his ten career victories coming by way of tapout.

Heinisch will be more willing to let his hands go on the feet, but he also has a wrestling base too, though he’s more likely to opt for ground and pound if he does get the fight to the mat.

Heinisch’s aggression could unsettle Carlos Jr here, but I still favor the Brazilian to have the stronger ground game and notch up another submission victory here.

This is very much a classic striker vs grappler match-up.  Anderson is a tall, rangey kickboxer with stopping power, but she’s so far proven to be vulnerable on the mat.

The 6-0 Spencer on the other hand is a shorter, stocky wrestler who would be wise not to spend too long attempting to strike with Anderson, and should instead take advantage of her questionable takedown defense.

Both fighters have a good chance here, so it’s not easy to choose between them, but I’ll side with Spencer’s wrestling to win out over 15 minutes to win on the scorecards.

With Neil Magny forced out of the event early on fight week due to a potential USADA drug-testing violation, Vicente Luque now faces a short-notice UFC newcomer in Derrick Krantz.

Krantz is an established veteran though, having fought for LFA and it’s predecessor Legacy FC for many years, and he’s won 8 of his last 10 fights, so he’s no pushover.

Luque’s a heavy-hitter who has KO’d no less than five of his UFC opponents inside the first round and he’s also a predator on the mat too, though his fast-starting style can tend to him running out of steam later on in the fight.

Krantz has fought a number of respected fighters over the years and won’t be overawed by the occasion, while he’s got the skills to be an offensive threat wherever the fight goes, but it’s a tough assignment on such short notice and I think Luque’s quick-out-the-blocks style will lead to another early stoppage win.

It’s not immediately obvious why the UFC felt the need to re-run this fight for a third time, with Oliveira, which ‘Do Bronx’ won on two occasions by submission, though the first was later amended to a no-contest due to an illegal blow.

Their skill-sets are well defined a this stage.  Oliveira is an all-action fighter who throw all manner of offensive weapons on the feet, but is at his most deadly on the mat with terrific scrambling and relentless submission attempts, while Lentz is a tough, grinding wrestler.

I just think Oliveira still has too much for Lentz here. He’s the better striker and his BJJ is likely to give Lentz fits for the third time and lead to a submission finish.

This fight is very much a case of a specialist vs. an all-rounder, with Ramos being a terrific BJJ talent, while the debuting Hubbard is the jack-of-all-trades.

Hubbard won LFA’s lightweight title late last year, so he’s no slouch, but I think Ramos’ grappling game is just going to be on another level here and he’ll get this fight to the mat early and claim his 3rd first-round submission in a row.