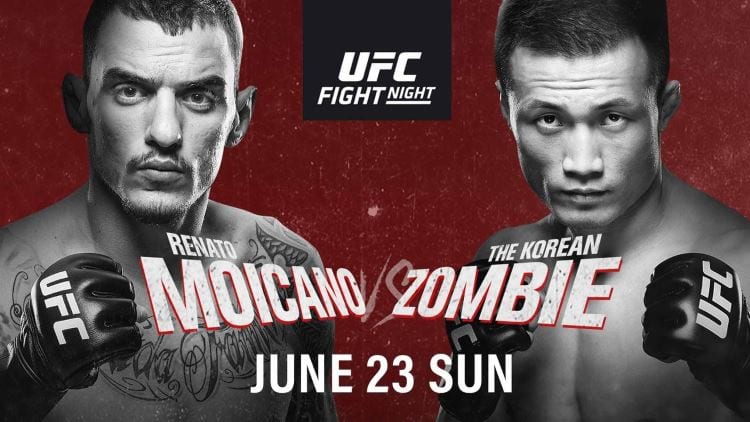 This has all the making of being an entertaining and closely matched encounter between two high quality featherweights.

Moicano works very well on the outside with his seasoned striking and is particularly effective with his kicks, so he’ll be looking to stay busy, chip away at ‘The Korean Zombie’s’ legs and stop him from getting into his rhythm.

Jung is exceptionally tough and has excellent cardio, so he’ll push Moicano right through to the final bell with his aggressive, all-action striking, but he does tend to eat more shots than he should and might struggle to get into the kind of range that will best suit his style if the Brazilian stays on the outside.

Moicano is not a noted finisher on the feet, but he is a talented grappler with a dangerous submission threat.  To be fair though, TKZ is also a creative spark in that regard too, so anything could happen if they do battle it out on the mat.

The Zombie is a daunting challenge for anyone as he’s well-rounded, offensively-minded and never gives up on himself, but if Moicano doesn’t give him the war he’s looking for and instead utilizes his effective striking from range then he can win rounds here and emerge with a decision victory.

Lineker recently complained about the lack of fights the UFC has been giving him and was swiftly booked to take on Font in the co-main event of this card in a rematch of a fight he previously won by unanimous decision three years ago.

Font has a significant height and reach advantage, but making that work for him will be hard against Lineker, who is tough as nails and is will continually wade into range in order to throw potentially fight-ending bombs.

Font can be aggressive in his own right, but he doesn’t respond as well when he’s put under pressure and so this isn’t the best stylistic match-up for him.

Font knows what he’s up against having gone the full 15 minute with Lineker before, and he does have a solid ground game, so that may be one avenue he’ll look to explore this time around, but I still think that in the end ‘Hands Of Stone’ is going to be the one making the greater impact here on the feet and that’ll lead him to another decision victory.

He may never be a big star, but Barberena has proven himself to be the type of solid, tough all-rounder that’s hard to beat.

That blue-collar grit and determination is likely to pose problems for Brown, even although on paper he has some big physical advantages, enjoying a 3” height and 5 1/2” reach differential over ‘Bam Bam’.

Barberena will push the pace, has an iron chin and I think he can exchange well with Brown on the feet and also use his wrestling to grind his way to a win on the scorecards.

Despite an ongoing domestic abuse case that saw her husband arrested just late last month after being on the run for nine months, Lee is still doing her best to focus on her fighting career as she takes on De La Rosa on Saturday night.

Lee is a decorated kickboxer and should have a significant striking advantage against De La Rosa, who simply isn’t on her level on the feet at this stage of her career.

Lee is also effective in the clinch and has improved takedown defense, which will be important here as De La Rosa is far more of a threat on the mat, with good grappling and four submission victories in a row highlighting her BJJ prowess.

That means De La Rosa certainly does have a chance here if she can get Lee down, but I think she’s going to be too hittable on the feet and will struggle to find the takedowns, leading to a decision victory for ‘KGB.’

Holland and Di Chirico have both picked up back-to-back victories in the UFC as they head into this middleweight match-up.

Standing 6ft 3” tall, Holland will have a 3” height advantage over Di Chirico on Saturday night, but he’s also got an unusually long reach for a middleweight at 81”, which gives him an expansive 7” advantage in that regard too.

Holland is a somewhat impulsive fighter who is a threat with both his striking and submissions, but isn’t always the best at deciding how and when to use his skills to their best advantage.

Meanwhile, Di Chirico is a fairly solid all-rounder without particularly standing out in any regard, which should be enough to keep this one competitive throughout.

I’m going to lean towards Holland here.  Despite being questionable on a strategic level, his hard to predict style should keep Di Chirico guessing and I expect him to be the busier fighter and have the better striking moments from range on his way to a narrow win on the scorecards.