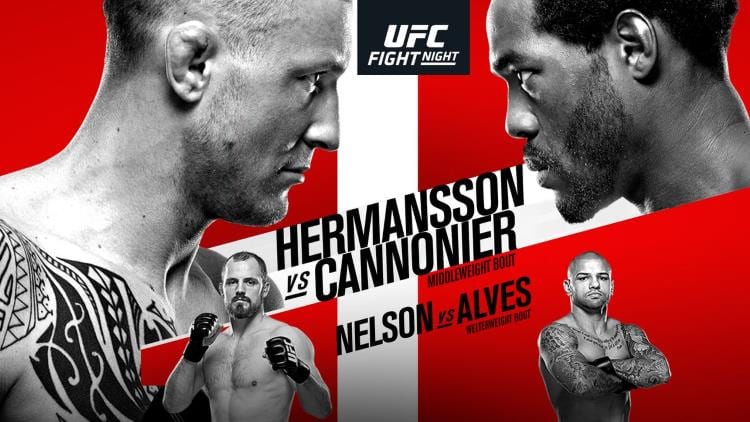 Hermansson is one of the middleweight division’s fastest rising new contenders, while Cannonier seems to have finally found a home for himself in the weight class too after originally dropping down from heavyweight and then light-heavyweight.

In terms of raw punching and kicking power and strength Cannonier certainly has the edge here, but Hermansson is undoubtedly the more well-rounded fighter of the two here.

Hermansson is the more technical fighter on the feet, still has stopping power and should have a speed advantage to go along with it, while he will clearly enjoy a big advantage in terms of grappling if he can bring Cannonier to the mat.

Cannonier’s knockout power makes him dangerous, but I have to go with Hermansson here and while I think he can get the job done wherever the fight goes, I think a finish by submission looks like his most likely route to victory here inside of two rounds.

Madsen is Danish, which partially explains why he gets co-main event honors in his UFC debut in his own homeland, but he has some serious credentials to back it up, having been an Olympic wrestling silver medalist.

Italy’s Belluardo can mix things up with striking and grappling, but lost his UFC debut by TKO and I think he’s going to have a hard time dealing with Madsen’s takedowns and pressure on top, leading to a comfortable decision victory for the newcomer.

This will be a fascinating battle on the mat, if the two fighters choose to engage there.

Both are proven to be amongst the best grapplers in the division, with Nelson perhaps being the quicker of the two and very crafty in scrambles, while Burns is stronger and may well have the overall edge in terms of BJJ.

Of the two Nelson is certainly more comfortable on the feet with a Karate based style that can see him be a little too eager to just hop around outside of range, but when he does come forward with purpose he has stopping power.

Burns can hit hard, but his striking is less fluid and technical, so I think if this is purely a striking match then he’s likely to come off second-best.

Burns also is coming in on just a couple of weeks notice, which is hardly ideal for a close, competitive match-up like this, and his cardio has been questionable in the past.

With that in mind I’m leaning towards Nelson here to try and keep this one standing for the most part and outpoint Burns over the course of three rounds to pick up a decision.

This should be a fun one as Cutelaba is exceptionally aggressive on the feet, while Rountree has always been a heavy hitter and has now added a more technical, refined muay thai style that seems to have elevated his striking to new heights.

If Cutelaba is smart he’ll be looking to use his superiority on the mat to his full advantage here as that’s definitely where Rountree is at his weakest.

However, Cutelaba can’t resist the opportunity to throw down and has a bad habit of running out of gas in the process, so I think Rountree can either catch him early while he’s being reckless, or finish him later once he’s tired.  Either way, I like Rountree to win by TKO.

Oleksiejczuk has emerged as a prospect worth watching in recent times, while OSP appears to be passed his peak and as such this makes him something of a gatekeeper here that will help test just how good the 24-year-old Polish fighter is.

So far Oleksiejczuk’s striking has been impressive in the UFC so far, stopping his last two opponents with strikes in barely a few minutes combined.

OSP’s stand-up on the other hand is very much a mixed bag.  He has some nice kicks and punching power, plus he’s a good athlete, but he’s never really been able to put it all together in a cohesive striking strategy.

His saving grace has been his at times impressive submission game and that would certainly be an avenue well worth exploring here as Oleksiejczuk is very much a striker, but I think it’s the Polish fighter who is going to gain the upperhand in the stand-up and make it count with a second round TKO stoppage.

It’s nice that Dalby has been able to make his way back to the UFC for this fight in his homeland, but the promotion certainly haven’t given him an easy match-up here.

Dalby is well rounded, has good cardio and has given talented opposition tough fights, so I wouldn’t expect anything less against ‘Cowboy.’

However, Oliveira hits hard, can work well in the clinch and has an effective submission game, in addition to being stronger and more of an athlete.

It’s possible Dalby could weather the storm here and then turn the screw later in the fight, and that may well happen, but I think Oliveira is the more offensively potent fighter here and will already have done enough by that stage to have secured a decision victory.