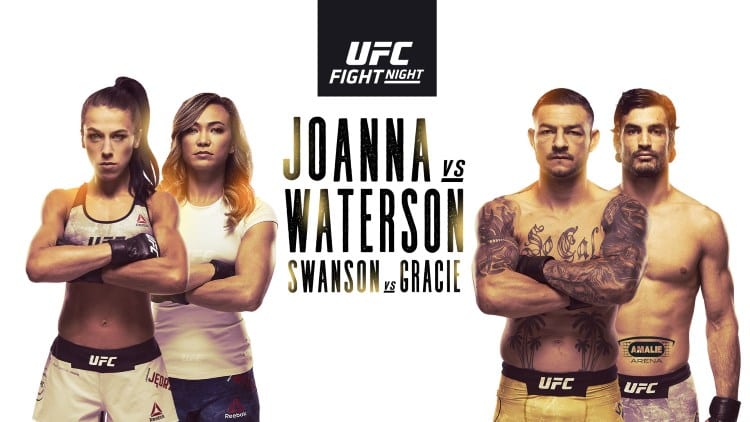 After such a long spell in which she should do no long it’s strange to see Jedrzejczyk in a run of form that’s seen her win just one of her last four fights.

It would be wrong to think that means she’s past her best though as she simply came up (twice) against a fighter in Rose Namajunas who had her number, while a move up to flyweight to face the bigger Valentina Shevchenko, who had previous kickboxing wins against her, was always going to be a tough match-up.

Now she moves back down to the division she’s much better suited to and will look to break Waterson’s recent three-fight winning streak.

As always Jedrzejczyk will be looking to make her mark on the feet, having some of the sharpest striking in all of women’s MMA, and she’ll have a 3” height and 3.5” reach advantage to make it count.

Waterson is comfortable on the feet and will use kicks, punches and movement, but I think she’s going to come off second best here against the quicker, more technical fighter who will pick her apart with laser-accurate combinations and better footwork.

Waterson’s best bet is to get Jedrzejczyk down as she’s a good grappler and a real threat from submissions, but the former champion’s takedown defense has always been one of her strongest points, even against better wrestlers, so I think ‘The Karate Hottie’ will struggle to get her down.

Overall this feels like a fight that should see Jedrzejczyk shine and I’ll take her to convincingly win the stand-up battle, but ultimately settle for a decision victory.

As the son of the legendary Rickson Gracie, there’s been even more pressure on Kron Gracie’s shoulders than other members of his storied family, but the decorated BJJ specialist has so far proven he’s up to the challenge with a perfect 5-0 record.

That includes a win in his UFC debut against Alex Caceras, but now he’s facing a major step up in competition at a still relatively early stage in his MMA career as he goes up against an established veteran in Cub Swanson.

Admittedly the 35-year-old Swanson has been showing signs of having gone past his best with a slump that’s seen him lose his last four fights in a row, but that was against a consistently high level of opposition and he still remains a quality striker.

Traditionally the Gracie clan has been weaker on the feet, but Kron has shown more potential than most in that area, and has some solid fundamentals to build from.

That being said, it would be foolhardy for him to attempt to beat Swanson on the feet when he has a clear advantage on the mat.  Swanson has a ground game too, but the majority of his losses over the years have been due to submissions, including two of his last four, and that’s a real concern against someone of Gracie’s caliber.

If Swanson keeps this one standing then he’s in with a good chance to get back to winning ways,  but I think Gracie will only entertain him for short periods and instead will focus on his strong suit and emerge with a submission victory.

Mike Davis has been drafted in on just a few days notice for this fight after Gifford’s previous opponent was withdrawn on short notice, with both men looking for a win after losing their UFC debuts against tough opponents.

Davis has the striking advantage and will press the action here, but he will also mix in takedowns and has good ground and pound and a knack for finding a finish one way or another with punches so far in his career.

A former lumberjack, Gifford is also a tall lightweight and will actually have a slight reach advantage here, but though he can strike it’s his ground game that’s his strongest suit and he has a string of submission victories to his name.

I’m always reluctant to pick a fighter coming in on such short notice and I think Davis’ aggression could  play against him here as Gifford lures him into a second round submission on the mat.

As a former Jiu-jitsu ace, Dern has been a much hyped prospect since she first started in MMA and after a five fight winning streak she earned her place in the UFC and went on to rack up two more victories, before catching everybody by surprise when she announced she was pregnant and would be taking time out from the sport.

Now 26, she’s finally set to return after a year and a half out and it’ll be interesting how she copes upon her return, both in the cage and in terms of her weight cut, having missed the 115lb mark three times in her career so far, including once in the UFC.

While Dern is an excellent grappler, she’s much more green on the feet, though she’s not afraid to compete in that regard and has shown she’s got punching power.

In Ribas she’s facing a fighter who is also at her best on the mat and has good submissions, but I don’t see her having much success against someone of Dern’s caliber.

Ribas does have some finishes on her record via strikes and that’s her best chance of getting a win here, but I think despite the layoff Dern will make the most of her advantange on the mat to get a submission victory inside of ten minutes.

A lanky giant in the lightweight division, Pena will as usual have a size advantage in this fight, being 6” taller and with an extra 5” in reach over Frevola.

Pena uses those advantages with strikes from range, while his frame also makes him difficult to deal with on the mat and he has a creative spark that also makes this proven finisher a threat via submission too.

Frevola is quite an aggressive fighter with solid power and can wrestle too, so if he’s struggling to get in on Pena he may look for takedowns and try to control ‘Violent Bob Ross’ on the mat.

Both men can overcommit at times and so this one could get a bit scrappy, but I think Pena’s striking from range and awkward to deal with style on the mat will enable him to emerge with a decision victory here.

Anders drops back down to middleweight after a KO victory last time out and he’ll be looking to make good use of his heavy-handed boxing style here.

Anders generally sticks to the basics and doesn’t have to high a volume of strikes, but that shouldn’t be too much of an issue here as Meerschaert doesn’t have a high output either and lacks his striking power.

Meerschart does have a slight reach advantage, but he’s much more comfortable on the mat and will look to avoid being outgunned by trying to get the fight there in order to utilize his good submission skills.

However, I think Anders strength at 185lbs and takedown defense will enable to keep this one upright where he has a significant advantage and he’ll finish Meershaert by TKO in the second round.