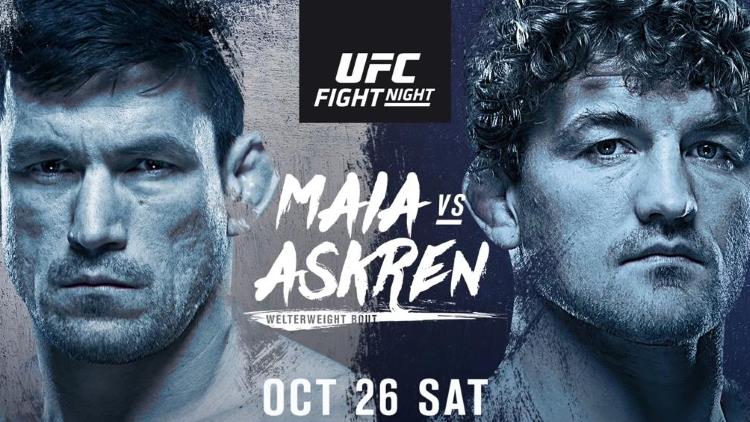 Askren’s first ever defeat was as bad it gets, getting KO’d in just 5 seconds by a Jorge Masvidal flying knee, and despite his impressive winning record up until that point, it’s left him with a lot to prove.

Luckily for him he’s been given a match-up that’s much more to his liking this time around, as Maia doesn’t have the dynamic striking that both Robbie Lawler and Masvidal have presented to him so far in the Octagon, and instead will be happy to engage with him on the mat, where they are both most comfortable.

That being said, if Maia does choose to just strike, even though he’s not the greatest on the feet he has a more developed game than Askren in that regard and could potentially outpoint him.

However, after what happened last time out I expect Askren to want even less time upright than he usually does and so he’ll be looking to assert his Olympic-level wrestling here to smother his opponent and grind out a victory.

Maia has had difficulties with excellent wrestlers in the past, but the difference is that the likes of Kamaru Usman, Colby Covington and Tyron Woodley were also dangerous strikers, so were able to use their wrestling to fend off the Brazilian’s inferior takedown attempts and punish him on the feet.

Instead, with Askren going for takedowns, Maia will be on the mat where he’s happy to operate and his world class grappling and submission threats makes him a real handful for anyone there.

This is a tricky one to call, but I don’t think Maia has the power to scare Askren off on the feet and so the wrestler will play it ultra-cautious and avoid the stand-up altogether by seeking to grind out a win on the mat here, aided by his ageing opponent’s wilting cardio in the later rounds.

Johnson is not as bad a fighter as his current 3-6 run in the UFC over the past four years would suggest.

He certainly has his flaws, such as being somewhat of an unreliable performer and having an increasingly suspect chin, but he still remains a good boxer with very fast hands and a good work rate, while also being a solid wrestler too.

In Ray he’s got an opponent whose also struggling for form, having lost three of his last four fights, and two of them by KO.   Ray is also a solid striker who can also mix things up on the mat, so it should be a competitive fight wherever the action goes.

I think this one is most likely to be won and lost on the feet and with Johnson having the speed advantage and also being the more willing to press the action I can see him emerging with a decision victory here.

Camacho is a fun fighter to watch with his action-orientated striking approach, but it doesn’t always work in his favour as he’s lost more fights than he’s won in the UFC to date.

In Dariush he’s facing an opponent who can strike, but is much more effective when it comes to his dominant wrestling and submission threat on the mat.

Camacho actually has genuine wrestling and BJJ credentials of his own that we rarely ever see due to his love of striking, but I’m not sure that will be enough against someone of Dariush’s calibre and I’m taking him to control the action on the ground and lock up a second round submission here.

Two imposing physical specimens attempting to make their mark in the heavyweight division collide here in a fight that looks destined to end inside the distance.

Gane has only four wins to his name, but he’s an exciting prospect already, standing 6ft 5”, 265lbs with an 83” reach and big power to go with it, and even signs of a developing ground game too.

Mayes actually matches up very well size wise, being 6ft 6”, 260lbs and 82” reach and he’s also a one-punch KO finisher and has more experience under his belt.

Both fighters have the potential to find a quick finish here, but I think Gane has the greater potential here and with the skills he has already I think he will be the man to emerge with his hand raised inside the first five minutes.

Salikhov truly is a devastating striker who has so far used that to finish 12 of his 15 career victories, including back-to-back KO victories in his last two UFC outings.

Salikhov is also a lot of fun to watch because he’s capable of unleashing all sorts of flashy techniques and has proven they are not just for show by winning several times with spinning back kicks and hook kicks.

Staropoli is also a proven finisher and keeps up a high volume of strikes, but he is quite hittable in return and I think that Salikhov is just to potent offensively to not take advantage of that, and will earn himself a second round TKO stoppage here.