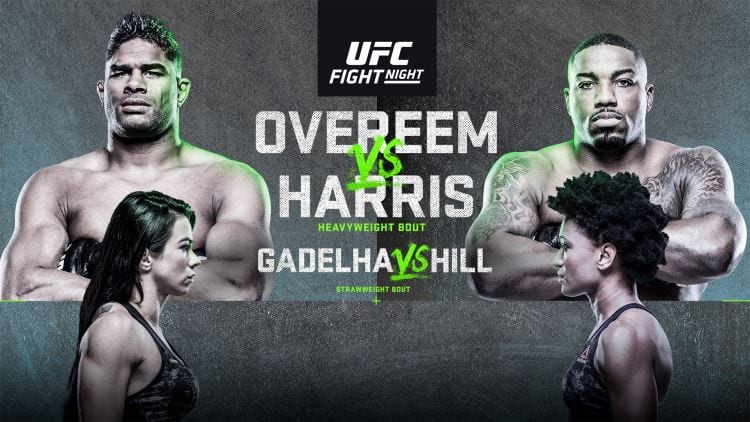 At first glance this looks like a fun striking battle with both of these heavyweights being known for their finishing power on the feet.

Harris’ size, boxing ability and heavy hands have led him finishing all 13 of his career victories inside the distance and given that Overeem’s chin has been cracked on many occasions, he’ll fancy his chances of doing likewise on Saturday night.

Overeem remains a serious threat himself though on the feet with punches, kicks and excellent knees, while he also stays mindful of the need to protect his chin when he’s under attack.

However, Overeem’s best weapon this weekend might be his grappling and it’s something he’s not been afraid to go to at times in the past to his advantage.

Harris is vulnerable on the mat and I believe Overeem’s solid wrestling, together with posing problems from both ground and pound and submissions will lead him to a second-round stoppage victory here.  That being said, if ‘The Reem’ opts to just stand and trade then I favour Harris.

Hill is coming off her best spell to date, winning three fights in a row inside the Octagon, but she wasn’t fighting anyone on Gadelha’s level and also was able to engage on her own terms on the feet.

Gadelha can operate to some extent on the feet,  but Hill’s speed, movement, volume of strikes and pace would be hard for the Brazilian to keep up with over 15 minutes of fighting, though I think she’s too durable to be stopped if that was the case.

However, Gadelha is primarily a grappler and a very good one at that, which should enable her to exploit Hill’s weaker mat skills, potentially just landing repeated takedowns and enjoying long periods of control to cruise to a decision victory, though I think she’ll step it up a gear and find a submission stoppage before the end of the second round.

Barboza steps down to featherweight for the first time and comes up against a fighter on a hot winning streak in Ige, who has emerged victorious in his last five UFC fights.

Barboza has lost four of his last five fights and has been in a lot of wars, but in all fairness his level of competition has been very high and with his vast level of experience he still has a lot to offer at featherweight if his already lean frame isn’t too badly compromised by the weight cut.

Ige is well-rounded, hard working and the fresher of the two, but I don’t think he has the power to really trouble Barboza and though he has a solid ground game he may struggle to get past the Brazilian’s solid takedown defense.

As such, I favor Barboza to keep this one standing and show off his slick, technical and versatile striking on his way to a decision victory.

Anders has good athleticism and power, but given his relatively late start in MMA he’s still not a particularly technical fighter and does still have holes in his game.

Jotko is more of a competent all-rounder, but offers little in the way of a finishing threat, whether by power striking or submissions.  Instead, the Polish fighter is more of a grinder who likes to impose his will in the clinch and can be heavy on top too.

Perhaps Anders can land something big here and look to finish his opponent, but I’ll take Jotko to stifle his opportunities to do so for the most part and do most of his work against the cage on his way to a relatively uneventful decision victory.

Both men here are on good runs, having gone undefeated in their past five Octagon outings.

Yadong is an explosive athlete with stopping power and he can wrestle too, while Vera might not be wielding the same firepower, but his all-action, sometimes reckless style on the feet and mat together with his good cardio makes him a real handful to deal with.

This is a tricky fight for Yadong as he struggled a bit on the mat against Cody Stamann last time out at times and Vera is a crafty grappler.  Nevertheless, I’m going to take Yadong to have learned lessons from that and land the harder shots on the feet and proceed with caution when using his wrestling to edge out a decision victory.