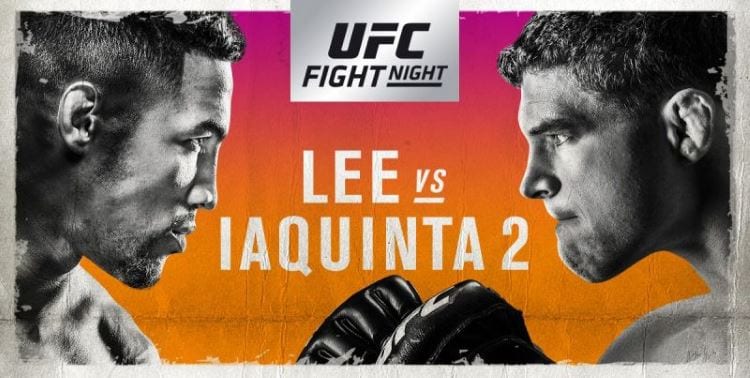 Lee lost to Iaquinta by decision in his Octagon debut almost five years ago, but since that competitive showing he’s only tasted defeat twice in his last 12 fights in the UFC and is now looking for vengeance.

While Lee is hungry to make his way to the top, Iaquinta is less so, having spent considerable periods out of the Octagon, fighting only twice in the last three-and-a-half years while feuding with the UFC over payment, getting a ‘regular’ job and flirting with the idea of retirement.

Nevertheless, Iaquinta has only lost once in his last six fights and that was against dominant champion Khabib Nurmagomedov who he took the distance back in April.  Iaquinta remains a dangerous, aggressive striker with finishing power and he can wrestle too, which makes him a tricky fighter to deal with.

Meanwhile, Lee’s stand-up has improved since their first meeting, and though he can be hurt on the feet he has shown good powers of recovery and durability.  He’s also a very strong wrestler and submissions are generally his go-to when he’s looking for a finish, and he’s proven to be adept at getting at them.

If Iaquinta had been more active and engaged in his MMA career over the past few years I may have been more tempted to pick him here, but as it stands this is a close fight which he could potentially win on the feet, but more likely Lee finds the takedowns necessary to control him on the mat and lock up a submission in the third ound.

A mainstay in the UFC’s lightweight top 10 for a number of years, Barboza is coming off back-to-back losses as he faces up to a rising contender in Hooker, who is on a four-fight winning streak and looking to blast his way into the top 10 himself.

Hooker has exceeded expectations since moving up to lightweight and now appears to have really settled into his stride as a dangerous muay thai fighter with four wins in a row, including three by knockout.

Of course Barboza is also highly regarded as a stand-up specialist, but he’s had a bit of a rough time of it of late with a comprehensive beatdown against Khabib Nurmagomedov being followed up by a TKO defeat against Kevin Lee.

It’s possible that Barboza’s technical proficiency and experience may win out here, but Hooker seems the younger, fresher, in-form fighter and I think his forward pressure will throw the Brazilian off his game and lead to a stoppage mid-way through the fight.

After an extended stint at flyweight, Pettis moves back up to bantamweight after losing two of his last three fights to face Font, who is also 1-2 in his last three outings.

This move might have more to do with the fact that the UFC seems set on shutting down the 125lb weight class next year than anything else as Pettis is relatively small and doesn’t pack a whole lot of punching power at flyweight, nevermind bantamweight.

On the other hand, Font is more suited to 135lbs, being slightly taller and also holding the reach advantage, plus he has the stopping power on the feet that Pettis lacks.

Technically Pettis is a sound striker who won’t take too many risk and he’s good on the mat too, but Font isn’t out of his element when it comes to grappling and I think he’ll prove to have too much firepower for Pettis on the feet and consistently land the bigger shots to claim a decision victory.

Miller submitted Oliveira quickly when they first met almost nine years ago, very early in the Brazilian’s run in the UFC, but since then it’s ‘Do Bronx’ who has gone on to claim the record for the most submissions in the history of the company (11).

Oliveira is now 29-years-old and is coming off back-to-back victories, while Miller is 35 and not so long ago was on a four-fight losing streak.

Miller is a seasoned veteran who’s solid on the feet, but is at his best on top with good wrestling and  even better Brazilian Jiu-Jitsu.

Oliveira is a born finisher and that can make him a little reckless on the feet, but also makes him a nightmare on the ground with his creativity and relentless pursuit of submissions giving opponents all they can handle.

Miller could have some success on the feet here and he’s a crafty customer on the mat too, but I think at this stage of their career’s Oliveira’s higher octane offensive pressure will pay dividends, leading to a second round submission victory.