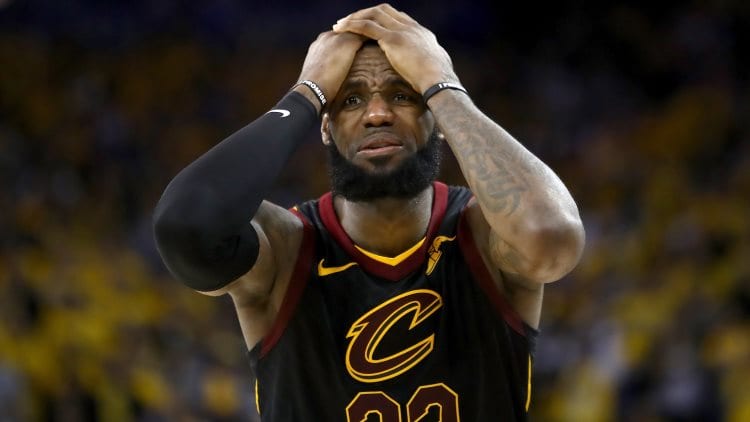 Game 1 of the NBA Finals couldn’t have been more exciting and we’re hoping for another cracking game on Monday.

It was one that the Cavaliers let slide after having the chance to go up by a point with under five seconds to go. To compound the missed free-throw, J.R Smith then proceeded to run out the clock in a woeful error from the Cavs’ swing man.

Every game of the finals is important but it’s especially important for the Cavaliers, which can’t go down 2-0 and expect to be a contender for the title.

Many punters are expecting the Golden State Warriors to roll through in either four or five games, but Game 1 showed punters why the Cav’s should be respected.

We stated that LeBron James needed 50 points to win the opener in Oakland and even that wasn’t enough. The King might need 60 to win this time around and if Kevin Love is suspended for Game 2, it’s going to be even harder for Cleveland.

Will the loss take all the spark out of a Cavaliers team, which has already come under scrutiny for not trying? Or will it spur them on, thinking that they only need to improve a touch to steal a win away from home?

The game lineups haven’t been confirmed yet but Tristan Thompson and/or Kevin Love could be suspended for the game.

There’s also doubt over Andre Igoudala’s injury but he’s currently listed as out for Game 2 of the NBA Finals.

Bookmakers have the Warriors as strong $1.14 favourites and –11.5 on the points spread. That’s around the same line as the opening game and punters have another tough decision.

It may have been an overtime win for the Warriors but they have been given a wakeup call and should respond in the only way they know how.

We’re fully expecting the likes of Klay Thompson, Steph Curry and in particular Kevin Durant to explode in Game 2.

Durant has been playing understated basketball for a man of his ability and we’re predicting a break out game from one of the best players in the league.

We’re confident Game 2 will go the way of the Warriors and Sportsbet is offering an option involving Kevin Durant. If he scores 30 points or more and the Warriors win, Sportsbet pays out $2.25 (CLAIM NOW).

That’s great value and he’s also at $3.75 to record a double-double in a Warriors win.

For points start bettors, we’re predicting a big game from the Warriors and they shouldn’t have any problems covering the –11.5 spread.

The Cavaliers kept the opening game close by making clutch shots at the right time and LeBron was a man on fire. It’s tough to doubt James again, but he’s due a disappointing effort and he might save his energy for their first home game.