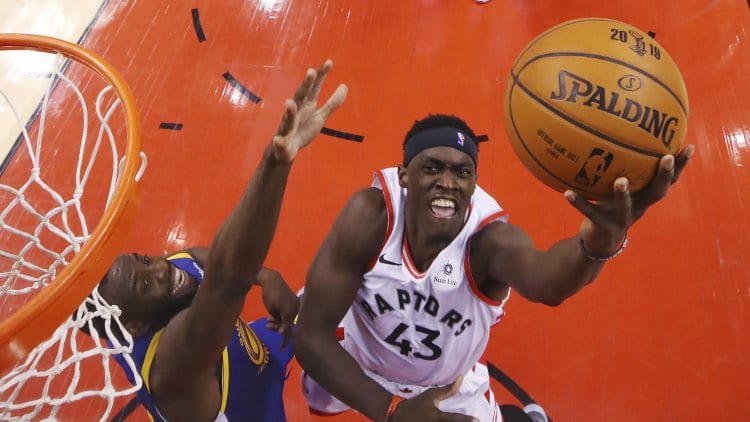 Game 2 of the NBA Finals plays on Monday and we have expert betting predictions and tips.

Toronto scored their first ever NBA Championship Finals win when scoring a 118-109 win on Friday and they’re looking to take a 2-0 lead in the best-of-seven series.

However, Golden State aren’t a champion team for nothing and many punters are expecting a bounce-back performance.

Game 1 in Toronto went exactly as planned for Raptors’ backers. They never really looked in doubt when recording a 118-109 win and that was thanks to some stellar play from Pascal Siakam.

We stated that the Raptors support men would need to stand up and Siakam lead the way. He scored 30 points and barely missed from the field.

Many punters are expecting Siakam to regress for Game 2 and that’s likely, but there are other Raptors players that could stand up.

Kyle Lowry was relatively quiet on Friday and he can drop 30 points on any given night, but he’s not the concern going forward. The concern is with the health of Kawhi Leonard, who looked very average in Game 1.

Leonard clearly has a leg muscle injury but he continues to play. He was limited in offense and his usual tough defence went missing in patches. He even pulled up for a lame three-pointer when he had a two-on-one fast break.

That doesn’t bode well for the rest of these playoffs, but his mere presence on the court could be enough for the Raptors to take Game 2.

For the Warriors, they were finding it tough to get open against one of the best defensive teams in the NBA. When Steph Curry got open, he knocked down his shots, but Van Fleet defended him with determination.

That forced the Warriors to make the extra passes and although they’re good at that, they simply weren’t knocking down the shots. Klay Thompson went missing throughout the game and Draymond Green was in foul trouble early.

They scored a lot of their points on second chance opportunities, but that’s not going to please their coach. If they’re going to even this series at 1-1, it’s going to take a complete team effort with Kevin Durant still on the sidelines.

Game 2 isn’t exactly a must-win game for the Warriors, but going down 0-2 is never an ideal situation. They’re expected to win both games at home but they still need to win once in Toronto.

They had a chance to snatch a victory on Friday after closing to within three points late, but some timely shots made from Toronto put that comeback to bed.

Bookmakers have the Toronto Raptors at a shorter price than what Game 1 was framed at. Raptors were $1.81 for Game 1 but have been installed as the $1.75 favourite for Game 2.

We’re expecting plenty of money to come for the Golden State Warriors. They’re a heavy public team and punters seeing the $2 on offer will be happy.

That being said, we’re confident the Raptors can continue their home dominance with another win. There’s no logical reason to back against them and we’re hoping for a better effort from Kawhi Leonard.

We know he’s not healthy, but even if he can score 20 points, that should be enough for the Raptors to see it through.

Warriors haven’t shown us enough to warrant picking them and until Kevin Durant gets back, we’re not going to be favouring them to win.