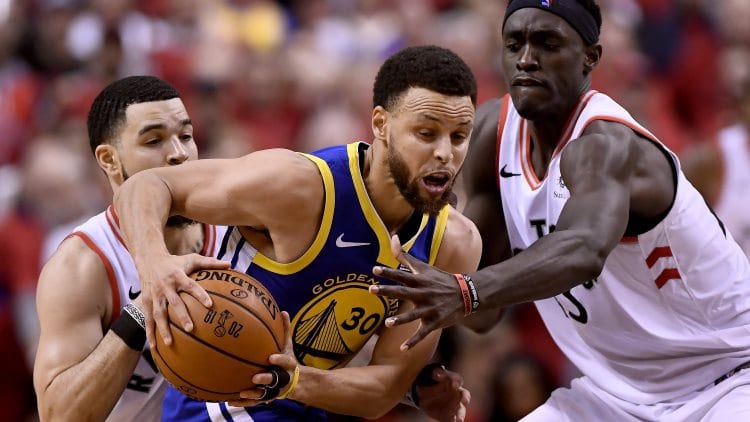 Game 2 of the NBA Finals plays on Monday and we have expert betting predictions and tips.

Game 3 of the NBA Finals plays on Thursday and we have expert betting predictions and tips.

The series is even at 1-1 after the Golden State Warriors produced an epic comeback in Toronto on Monday. Despite being down by double-digits, the Warriors scored an 18-0 start to the third quarter to put the game to bed.

The teams now head to Oakland where the Warriors are tough to beat, but injuries could play their part in this game. Will Kevin Durant and Klay Thompson play? Or will the Warriors be forced to dig deep into their thin bench once again?

Golden State wrestled back the advantage in the best-of-seven series when scoring a 109-104 win on Monday. It wasn’t all smooth sailing for the Warriors, however, as they were down throughout the entire first half.

Then started an all-time run which blew the Raptors off the court. Warriors went on an 18-0 run to open the third quarter and the Raptors couldn’t hit a shot.

During that run, Steph Curry caught fire and despite suffering some flu-like symptoms throughout the game, he produced a big performance. As did Klay Thompson, but he suffered a late hamstring injury, so his status is undecided.

He didn’t seem too worried after the game when slinging insults towards Drake, so we’re expecting him to suit up on Thursday.

The worrying thing for the Warriors is their bench. It’s extremely thin and when Curry and Thompson are off the court, there’s absolutely no scoring power.

For Toronto, they need a consistent performance for their supporting case. Kawhi Leonard is playing tired but is still producing big numbers. He was supported by Pascal Siakam in Game 1 but had little support in Game 2.

The only player that decided to turn up was Van Fleet and that was on defense. His defense of Steph Curry has been gutsy and Curry is having to do a lot of running to get open.

When Van Fleet was off the court, that’s when Curry did most of his damage.

If Toronto are going to take back home-court advantage, they will need all of their stars to stand up.

Bookmakers have the Warriors as firm favourites in the head-to-head market and we’re not surprised.

They should be winning this game back at ORACLE Arena but playing at home isn’t simply going to be enough for the Warriors. They will need to play better in the first half, as they have faced big deficits throughout the playoffs.

Giving Toronto confidence early on the road could be a recipe for disaster late in the game and although they came back to win Game 2, winning from behind isn’t easy.

There are still big injury concerns for the Warriors and for that reason we’re taking the Raptors with the points.

Bookies have the line at +6 and that should be enough points for Toronto. We’re expecting a close game and if players like Kyle Lowry and Pascal Siakam just provide Leonard with some assistance, it should be enough.

However, we think the Warriors will win the game at odds of $1.42.