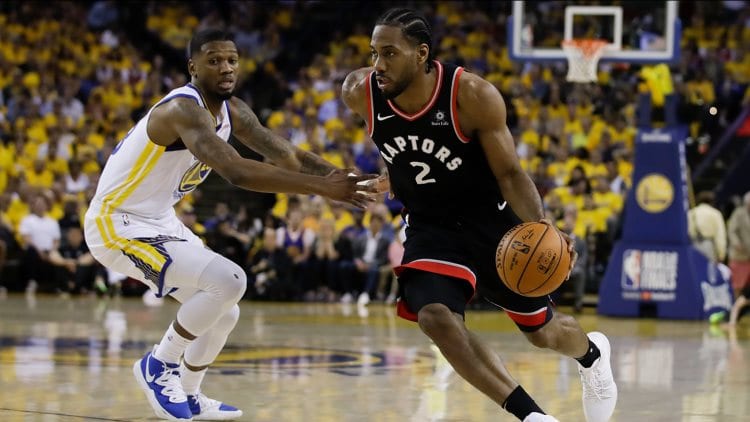 Game 4 of the NBA Finals plays on Saturday and we have expert betting predictions and tips.

Toronto took a 2-1 advantage when beating a depleted Warriors team at ORACLE Arena on Thursday. It was a significant win for the franchise, which could take a 3-1 lead on Saturday.

The Warriors were contempt on going down 1-2 in the series when the decision to rest Klay Thompson was made. There are reports that Thompson and Kevin Durant could play Game 4, which would make things interesting.

Toronto scored a 123-109 win in Game 3 and they dominated most of the game. They didn’t rely on one player to have a big game, instead they played as a complete unit.

Kawhi Leonard did his thing and he got massive help from the likes of Van Fleet, Kyle Lowry and Danny Green. It was Green, in particular, who nailed some key three-pointers at vital stages to really put the Warriors to the sword.

Along with some big shots made by Kyle Lowry, the Toronto Raptors were able to keep the Warriors at arm’s reach whenever they made a run. That was an important reason as to why they won the game and it will give them ultimate confidence for Game 4.

The Warriors were no match defensively for the Raptors, who were able to get to the rim whenever they pleased.

Poor performances clouded the Warriors’ performance. Steph Curry was huge, but he was the only scorer on the court. Without Curry in the lineup, this team would have struggled to score over 50 points.

Particularly poor was both Demarcus Cousins and Draymond Green. Cousins looked out on his feet and seemingly frustrated he couldn’t get his shot.

Draymond Green was a turnover machine and barely made a shot. He’s going to need to be much better if the Warriors are hoping to win Game 4.

That being said, we’re fully expecting Kevin Durant to be made available for Game 4. Durant, coupled with Klay Thompson, would be enough to win this game, but how rusty will Durant be?

To be thrusted into a high-pressure game wouldn’t be easy but the Warriors would rather have him on the court.

Game 3 saw some big betting fluctuations, based on the availability of Klay Thompson. Expect to see similar this week as bookmakers will have their finger on the pulse.

If Durant is listed to play, expect the current odds of $1.42 for the Golden State Warriors to firm considerably into around $1.35.

If he doesn’t play but Klay Thompson does, the line should stay firm and we’d expect to see some money come for the Raptors points-spread line.

Punters shouldn’t overlook the Warriors’ regular season home record of 30-11 and we can’t see the Raptors scoring two away wins in a row.

This is do-or-die for the Warriors and when their backs are against the wall, they typically find a way to get over the line.