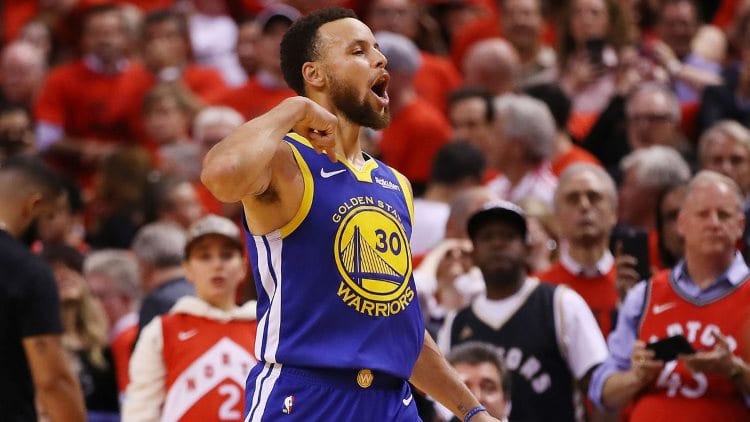 Game 6 of the NBA Finals plays on Friday and we have expert betting predictions and tips.

Despite being down by six points with under three minutes to go, the Golden State Warriors managed to win Game 5 and force a Game 6.

Just when it looked as though the Raptors had sealed their first NBA Championship win, the Warriors have given punters more NBA to enjoy.

Game 6 is back in Oakland this Friday and bookmakers have the Warriors as the favourites to force a Game 7 in Toronto.

For most of Game 5, the Raptors looked a beaten side until Kawhi Leonard got hot in the fourth quarter. He gave them a six-point lead on the back of a 10-0 run but for some reason, the Raptors called a timeout.

That timeout would eventually be their undoing. They were running hot and had Golden State on the ropes. Calling a timeout gave the Warriors time to recoup and it cooled down the hot Raptors.

Decisions like those come back to haunt teams and the Raptors will be hoping it doesn’t.

That being said, the Raptors still have every chance of going into enemy territory and scoring their first championship. They have already won twice on Golden State’s floor this series, so that’s not going to scare them.

The Warriors will be without Kevin Durant, who scored 11 points in 10 minutes on Tuesday before tearing his achilles tendon. He shouldn’t have played in that game and will now sit on the sidelines for over a year to recover.

However, when you have the splash brothers in your team, anything is possible. Curry and Thompson ignited the late comeback with three late three-pointers. They were not easy shots to make, but they barely broke a sweat.

Curry has largely been leading the Warriors during this playoff run. Without Curry and to a lesser extent Thompson, the Warriors have very little offense. Draymond Green has one of the worse shooting actions in the NBA and the bench provides absolutely nothing in terms of scoring.

If the Warriors want to force a Game 7, the onus will again be on Curry and Thompson. They need to continue to drop those deep shots, just like they did in Game 5.

Keeping that form isn’t easy, however, and we’re expecting a dip in form from outside the arc.

It would be easy to pick the Golden State Warriors in this situation, but the Raptors are good enough to close out this series.

They have shown to be the best team during this series and although they couldn’t close it out in style at home, their fans won’t mind them closing it out on the road.

Toronto has already won twice at ORACLE Arena and given their history this season, we can’t go past the Raptors in what should be a closely-fought contest.

Value with the Raptors.