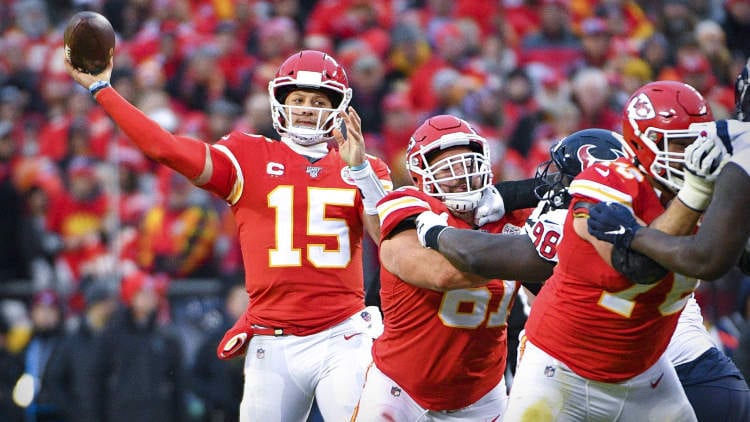 We have expert betting predictions for Week 1 of the 2020/2021 NFL season, which starts next Friday with the Texas vs. Chiefs.

The 21-week NFL season is expected to start with a bang and we look at all 16 games in the opening round of action.

Last season’s champions open up the new NFL season as the Chiefs take on the Houston Texans on Friday.

The Chiefs are expected to be just as good as last season, and signing Patrick Mahomes to a huge contract should give them plenty of confidence about their future.

Houston is coming off a tough year but if J.J. Watt gets back to his best on defense, expect improvement from them in 2020/2021.

Bookmakers have the Chiefs as firm favourites and we would back them in head-to-head markets.

We have high hopes for the Seattle Seahawks this season and they could start with a win over the Falcons.

Playing Atlanta at home is never easy, but the Falcons didn’t look impressive last season. They will need to rediscover their offensive firepower to keep up with Seattle.

Look for Russell Wilson to have a big game as the helm for the Seahawks. He could be in for a successful season and we’re backing them in Week 1.

Two New York teams do battle on Monday morning and expectations are similar for the Jets and Bills this season.

Buffalo looks to have a slightly better team this season, which is reflected in their odds for Week 1. They are currently $1.36 to win, which is short but they should get the job done.

The Jets are a team that can take flight at any given moment. However, inconsistent efforts have dogged them in recent years.

There has been early betting support for the Lions this season and many believe Matthew Stafford is in for a big year.

However, we see value in betting the Bears in Week 1. They often start the season well and despite a rough outing last season, they have a playoff-capable side.

They have a quality quarterback and a stout defense, which could give Stafford and the Lions’ offense some troubles.

The Packers vs. Vikings rivalry continues and it doesn’t get much better than when these teams play each other.

Minnesota comes into the season with high hopes and rightfully so. They have a team that could compete for the Super Bowl in February, and we’re not sure if that’s the case for Green Bay.

The Packers have Aaron Rogers, which is a big positive, but they are shaky on defense. We think the Vikings will make a statement in the opening week and take it narrowly.

Tom Brady might be done with the Patriots, but don’t expect them to fold over this season. They have Cam Newton in his place, and he will enjoy playing under a Hall of Fame coach.

Newton was inconsistent with Carolina and he suffered too many injuries. However, the Patriots are known for keeping their quarterback safe in the pocket.

It also helps that they’re playing the Dolphins in Week 1, so expect a comfortable victory for this underrated team.

Washington has home ground advantage for this game, but it should be the Eagles that come away with the win.

With Carson Wentz at the quarterback position, the Washington defense could be struggling to defend the pass throughout the game.

There hasn’t been much for Washington to get excited about in recent years, but they have a talented crop of quarterbacks at their disposal.

Despite that, stick with the Eagles in this division contest.

3:00am Oakland Raiders vs. Carolina Panthers @ Bank of America Stadium

Bookmakers have yet to release a line for this game, but we expect the Raiders to be slight favourites.

Despite playing away from home, the Raiders are a side that should be able to improve this season. They have now had time to adjust to a new coach and they have a team with quality players.

Carolina doesn’t have much strength at the quarterback position, so expect running back Christian McCaffery to do the load of the work.

Phillip Rivers is now the Colts quarterback and that could turn into success for the experienced QB.

The Colts were forced to find someone new after the exit of Andrew Luck, and Rivers is a very good replacement.

He should dominate the quarterback battle against Jacksonville, who are struggling to find someone decent to lead the team.

We expect the Colts to run over the Jaguars, who could be in for a long season.

We have high hopes for Baltimore this season and they should be too strong for an inconsistent Browns team.

Cleveland is capable of beating any team on any given day, but they are hard for punters to trust. Punters should be able to trust the Ravens, who have MVP Lamar Jackson at the QB position.

It could be a breakout year for the Ravens and starting off with a win in Week 1 is likely.

The Chargers and Bengals are expected to struggle this season but the Bengals have rookie QB Joe Burrow to get excited about.

He could be the difference in this game and although Chargers’ rookie Justin Herbert is a good player, he’s no match for Burrow.

The Bengals get a home game to start the season and punters are getting generous odds from bookmakers.

In what could be the game of the round, the new-look Buccaneers take on the always-dangerous Saints.

Tom Brady and Rob Gronkowski head to Tampa Bay with high expectations, despite likely needing time to gel with their new teammates.

The Saints don’t need time to gel, which is they are the firm favourites to win this game. Bookmakers have the home side at $1.50, which is a fair price.

It should be a great game but we give the slight edge to the Saints.

We expect improvement from the Cardinals this season but they don’t have an easy start in Week 1.

The 49ers are one of the favourites to win Super Bowl LV, and they should start the season with a win against an inferior opponent.

Playing at home also helps the 49ers and we thought bookmakers would have them shorter than $1.30 in the market.

A stream of support has come for the Dallas Cowboys to win the Super Bowl this year, but they often disappoint when expectations are high.

The Rams are coming off a disappointing season, but they might have had a hangover from the previous season. We expect them to bounce back this season and show the NFL just how good they are.

Punters get good odds for the home side and we’re happy to take them.

Steelers vs. Giants is always a fun game and it could be closer than the market suggests.

Pittsburgh are the $1.50 favourites to win and although they have the better team, New York shouldn’t be slept on this season.

Daniel Jones now has a season under his belt, and they still have Saquon Barkley at their disposal. That combination could be dangerous and we’re picking an upset.

A close game is expected on Tuesday afternoon as the Titans visit the Denver Broncos.

Denver is typically hard to beat at home and the Titans don’t travel well, but the Titans could have the better team this season.

Playing in Denver can be unusual for teams, due to the altitude, so we are picking the Broncos to come away with a tight win.

Bookmakers have the Broncos as slight favourites and expect those odds to firm throughout the week.