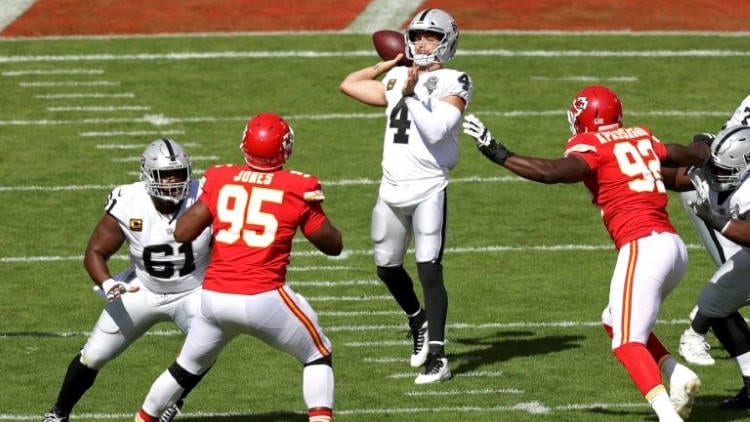 We have expert betting predictions for Week 6 of the 2020/2021 NFL season, which starts on Monday.

Covid has wreaked havoc with the NFL scheduling, so there is no Friday game this week. However, there are some exciting games in store on Monday and Tuesday for punters.

The Texans fired their coach and it paid immediate dividends last week. They finally got on the board after dropping their first four games, so their season is heading in the right direction.

However, they came up against an unbeaten Titans who demolished the previously unbeaten Bills on Tuesday.

Having not played for 24 days and now playing twice in a week is tough, but they look good.

The Colts came back down to earth when losing to Cleveland last week, but they should bounce back against the Bengals.

Cincinnati isn’t a bad team and their record should be better than 1-3-1, but they are still learning at many key positions.

Look for the experience of Phillip Rivers to take charge here.

Two bad teams square off here as the 0-5 Falcons look to salvage what’s left of their season against the Vikings.

Minnesota have improved over the last couple of weeks and playing at home should be enough to see them take this.

The Falcons have shown nothing and this is a great chance for the Vikings to gain momentum.

If Cam Newton is healthy and ready to play, the New England Patriots should be too good for the visiting Broncos.

The Patriots are 2-2 on the season and a perfect 2-0 at home. Not everything has gone their way this season and their record could be much better.

Denver has looked good at times but coming into Boston and beating the Patriots is never easy, so stick with them.

Nothing is going right for Washington or the Giants this season, but if New York wants to salvage something, they need to win this game.

At 0-5, the Giants are underachieving with Daniel Jones at quarterback. He has thrown for only two touchdowns and without Saquon Barkley, making yards has been difficult.

Washington isn’t much better and the Giants could finally show up.

The Ravens got back to winning form last week and the Eagles are next in their sights. The two birds are set to fly and it should be the Ravens coming out ahead.

Punters have lost confidence in the Eagles after a 1-3-1 start, which includes quarterback Carson Wentz, who isn’t playing well.

Lamar Jackson should be in full force and his team should take it.

The Steelers are quietly going about their business at 4-0 and they aren’t getting much respect in the betting.

They are the favourites to win this game, but we thought they would have been paying around $1.40 to win. Punters are getting good value and despite the Browns being in form, they can be tough to follow.

We expect the Steelers to run it down the throats of Cleveland, who can be shaky on defense.

4:00am Chicago Bears vs. Carolina Panthers @ Bank of America Stadium

Carolina have looked good throughout this season at 3-2 and they are the slight favourites over the Bears.

Chicago is 4-1 and they’re coming off a stunning victory over the Tampa Bay Buccaneers, but they looked shaky at times.

If Carolina can control time of possession, they could be slightly too good for the visitors.

The 49ers are struggling with injuries and they showed up after losing to the Eagles last week.

It wasn’t a good offensive performance and we’re not sure where they are going to get points from. The same can be said for Miami, but they are good enough to cover the spread.

Look for Ryan Fitzpatrick to work his magic and Miami a chance at winning late in the game.

Punters aren’t sure what to expect from either team, but Jacksonville has looked slightly better so far this season.

They are 1-4 compared to the Lions’ 1-3 record, but they have been competitive in some tough games.

There isn’t much to get excited about this game but if Gardner Minshew plays to the best of his abilities, the Jags could come out ahead.

The Dolphins demolished the 49ers last week and Ryan Fitzpatrick reverted back to his “Fitzmagic” days.

It was a comprehensive display and given that the Jets are the worst team in the league this season, another win looks likely.

The Jets have been awful at 0-5 and there is nothing to get excited about. They will be lucky to get close this week.

Tom Brady and the Buccs need to overcome their loss to the Bears last week, but facing Green Bay doesn’t help.

The Packers are flying at 4-0 and they have beaten some quality teams along the way. It bodes well for another good performance, and punters are getting value odds.

Tampa Bay are struggling to find their offensive rhythm, so look for the Packers to exploit that.

The Rams are going much better than the 49ers and they could win on the road. The 49ers were awful against Miami last week and we’re not sure if they will recover.

Injuries have taken their toll and despite expectations being low for the Rams this season, we thought they would be tough to beat.

$1.53 is a touch short of value for the Rams but they are worth backing.

Both the Chiefs and Bills came into Week 5 unbeaten, but now both teams are 4-1. The Chiefs lost to the Raiders and the Bills lost heavily to the Titans.

Injuries didn’t help Buffalo’s cause, especially defensively, but they were poor on both sides of the ball.

Kansas City didn’t play too poorly and punters are getting a good line this week. They are only –4, but expect that line to move.

Dallas won at the death last week but losing quarterback Dak Prescott could be the nail in the proverbial coffin.

They are 2-3 on the season and having a fill-in quarterback for the rest of the season won’t help their cause.

Arizona are playing well at 3-2 and they could improve on their winning record, as Kyler Murray continues to impress in his second season.