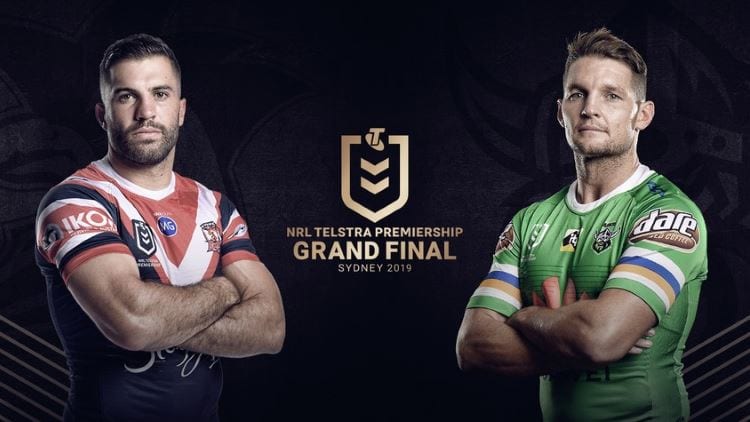 After months of play, the 2019 NRL Grand Final is upon us this Sunday at ANZ Stadium in Sydney.

The Sydney Roosters vs. Canberra Raiders looks to be an incredible final and it’s a story about two vastly different teams.

Roosters are the defending champions and are expected to win. However, the Raiders don’t look out of place in the final, despite not being in this position since Canberra’s heyday.

It all goes down this Sunday October 6 and we have all our game predictions as well as all the popular betting markets covered.

The Sydney Roosters arguably won the Grand Final last week when beating the Melbourne Storm 14-6. They showed great defense against one of the best attacking sides in the competition.

Many people look at this Roosters team and see their offensive weapons, but it has been their goal-line defense which has got them to this position.

In two finals games this season against the South and Storm, they have given up a total of only 12 points. That is an incredible statistic given that they have also scored 46 points themselves.

It has been total domination for the Roosters and despite not winning the minor premiership (Melbourne Storm), they did look like the best team throughout the year.

It has been a different road to the finals for the Raiders. Some average form coming into the finals (losses to Manly and New Zealand) was put aside when beating the Melbourne Storm 12-10 in Finals Week 1.

They took that momentum into the game last week where they scored a gritty victory over the Souths. However, it wasn’t as impressive as the Roosters’ win on Saturday.

Canberra is another defensively stout team which has given up only 20 points from their two finals games. There’s no doubting that they don’t have the superstars of the Roosters, but they do play well as a team.

Overall, both teams deserve to be in the final and it’s shaping up to be a classic contest.

Bookmakers have the Sydney Roosters as the $1.40 favourites and we’re not surprised by those odds.

They are expected to win the 2019 Grand Final and punters have been prepared to take the short odds on offer.

For the Raiders, they’re also at a value price. $3 is a fair price from bookmakers for the Raiders to cause an upset on Sunday.

We see this game going in a similar fashion to the AFL Grand Final. Richmond were expected to win against the inexperienced Giants and they did exactly that.

It shouldn’t be quite as one-sided as that final, but the Roosters look to have the Raiders covered at most levels. They have the better players and the experience of winning an NRL Grand Final.

Having that experience is extremely important in the big games and the occasion might get the better of a few Raiders players.

The current line is 7.5 points and we’re prepared and confident enough in the Roosters to cover that line. Canberra could show some early fight but as the game goes on, Sydney should out-muscle their counterparts.

Look for the likes of James Tedesco, Latrell Mitchell and Joseph Manu to exercise their strength against an undersized Raiders outfit.

There are many players who could score the first try in the final, but we’re going with the Roosters’ star players.

Brett Morris has been in fine try-scoring form this season and he was an incredible record of scoring first. Look for the Roosters to use their forwards up the middle early in the game before attracting the defense and then spreading it to the wing.

That’s going to play right into the hands of Brett Morris, who will be patiently waiting for his chance to cross for the first try in the game.

The Raiders outside defense can be susceptible at times so look for Morris to exploits those holes and bang over for a four-pointer.

Daniel “Giraffe” Tupou has the obvious size advantage over many of the Raiders and he could cash in early.

Tupou set up an amazing try against the Storm when out-leaping three opposing players and the Roosters love scoring off kicks.

They have one of the best try-scoring records off kicks and Tupou is a big reason for that.

Look for the rangy winger to get under a high ball and stake his claim.

We’re not completely dismissing the chances of the Raiders and they should start better than they finish.

Nick Cotric could be a player who makes a good start to the game for the visitors. Cotric is one of the more athletic players for the Raiders and that’s needed against a physical Roosters outfit.

He has been threatening to have a massive game and there’s no better occasion than in the NRL Grand Final.

The Clive Churchill Medal goes to the player who has the best game in the Grand Final.

There have been some quality winners of the Clive Churchill Medal and it’s a good potential lineup this season.

At the head of the betting market is James Tedesco at $4.50. The Roosters’ fullback has had a great season to date and he should have a good Grand Final game.

He does a mountain of work at the back and injects himself into the game whenever he feels like it.

That’s a dangerous quality to have and it’s why he’s the current favourite.

The man likely to set up most of the Roosters’ attacking plays is Luke Keary. He has had an indifferent season but he’s a quality player on his day.

That day could be this Sunday and we’re expecting the Roosters’ playmaker to have a 10/10-type performance.

$6.50 is a fair price for Keary and we’re expecting those odds to shorten.

We’re sticking with another Roosters player and Boyd Cordner could be in for a massive day.

He’s an often underrated forward for the Roosters and the captain could lead from the front this Sunday.

Cordner does all the little things that go unnoticed. However, he does make the odd mistake. That’s usually because he’s engaging himself into the game more than other players.

If he makes good metres and features in a couple of tries, expect Cordner to go close to winning the Clive Churchill Medal.