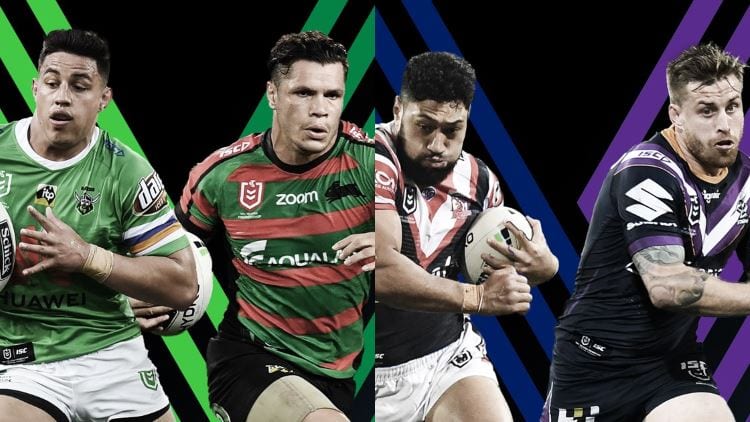 We have expert tips for the NRL preliminary finals which kicks off on September 27 with the Canberra Raiders vs. South Sydney Rabbitohs.

Four of the best teams in the NRL compete for a place in the Grand Final Sunday week and they should be cracking contests.

Following the first prelim on Friday, the Sydney Roosters will face the Melbourne Storm on Saturday in what many are calling the real Grand Final.

We have found the best bets for both preliminay final NRL games this week.

The Raiders rocketed into the semifinals via their incredible 12-10 defeat of the Melbourne Storm in Melbourne.

Their reward for that win? Playing a home semifinal in Canberra and we all know how tough it is to win there.

Canberra have been solid throughout the season but their confidence is brimming at the moment. Scoring a last-minute try against the Storm will only give them more confidence coming into this game.

Many of these players haven’t played in a game this big. However, they come into the game fresh and the same can’t be said for the Rabbitohs.

South Sydney is coming through a hard-fought 34-26 win over the Manly Sea Eagles last Saturday. It was a bruising game and it could leave them without some players.

It’s not easy to rebound from such a tough game and that’s the challenge that awaits the Rabbitohs this Friday night.

There is also concern for the play of Adam Reynolds. He was noticeably overawed by the occasion and they’ll need him to be more focused this time around.

The key to success for the Raiders is keeping their defensive structures in place. The Storm scored only 10 points and they then put up 32 on the Eels.

If the Raiders can play within themselves, they should be able to handle the Rabbitohs.

For South Sydney, they need an offensive spark but given how tired they looked last week, we can’t see that being easy.

Had the Melbourne Storm beaten the Raiders, this could well have been the 2019 NRL Grand Final. However, they didn’t and now we have a blockbuster semifinal matchup.

Melbourne stormed into this position following their 32-0 romping of the Parramatta Eels. It was one of the better performances we’ve seen this season.

Parramatta had a potent offense, which put up 58 points on the Broncos the week prior. Storm shut them down from the opening whistle and the rest is history.

Opposing them will be current premiership favourites Sydney Roosters. They might have finished behind Melbourne in the minor premiership, but they have grown with confidence this season.

They scored a 30-6 win over the Rabbitohs to open their finals campaign and having the week off should do them plenty of good.

With a back line packed full of talent, including the likes of James Tedesco and Latrell Mitchell, the Roosters should be feared.

There’s very little separating these two teams and it’s likely to come down to one or two plays. The Storm have a professional unit that doesn’t often make mistakes, but the Roosters are defending champions for a reason.

Both potent offenses could cancel each other out and we might see a tight game. The final score could be around the 16-14 mark and punters need to decide which team takes it.

We believe the Melbourne Storm are easily good enough to cause a minor upset. Bookmakers are giving them a +4.5 head start and that’s generous in our opinion.

Cameron Smith is still the best player in the NRL and if Cameron Munster and Josh Addo-Carr have a good outing, the Storm could be too good.