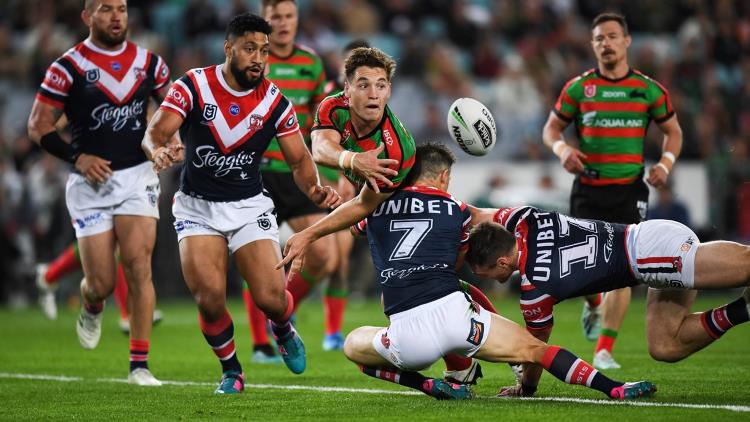 We have expert tips for NRL Finals Week 1 which kicks off on September 13 with the Roosters vs. Rabbitohs.

After 25 weeks of the regular season, the best eight teams will battle it out in the playoffs. The top four will face off to start the week and the bottom four will close out the action.

Everything is on the line this week and we have expert tips for all four NRL finals games.

These two teams played each other in Round 25 when the Rabbitohs came away with the 16-10 win at ANZ Stadium.

That could play in the minds of the Roosters this week but we’re expecting a much better effort from the 2018 NRL champions.

Roosters have been one of the best teams this season and they didn’t necessarily need to win last week. However, the win could cost the Rabbitohs their chance of winning this game.

Inspirational leader Sam Burgess will cop a one-week suspension after fighting last week and that’s a big loss for the Rabbitohs. We would have thought the important players would have stayed out of trouble, but that wasn’t the case.

Roosters also have some suspension concerns surround Jared Waerea-Hargreaves, but what’s new with the Kiwi international?

Bookmakers have the Roosters as they favourites and although this game could be close, we’re predicting a Roosters win.

Minor premiers Melbourne Storm will look to hold off the visiting Canberra Raiders on Saturday night.

It has been yet another professional season for the Storm and they should be the favourites to win the 2019 NRL Premiership.

They scored a solid 24-16 win over the North Queensland Cowboys last week and that was with a second-string unit. They will have all their top forces to face a pesky Raiders side this week.

The Raiders also fronted a second-string team last week, but they still had some top players running around. It wasn’t a good performance from the Raiders, which let the Warriors score two late tries to win the game.

It’s unlikely that the loss will play on their minds too much. Facing the Storm is a completely different challenge and we have some doubts about the Raiders.

They have been good at times this season, but you can’t play for 60 minutes and beat the Melbourne Storm at AAMI Park. An 80-minute effort will be needed if Canberra are going to cause a shock upset.

Melbourne should be too good for the Raiders. They have a complete team which is playing very well at the moment. Players such as Cam Smith and Cameron Munster will control the game and be too much for the inconsistent Raiders.

$1.42 is a fair head-to-head price from bookmakers.

Manly’s premiership hopes took a hit when they lost to the Eels last week. How they recover and rebound for the Sharks will be interesting.

Bookmakers have reacted to that loss by installing the Cronulla Sharks as $1.65 favourites and it’s tough to disagree.

Manly will be without Tommy Turbo and likely Martin Taupau, who will have to see the judiciary after a head-high tackle against the Eels.

Cronulla, on the other hand, comes into this game full of confidence following their 25-8 sudden-death win over the Tigers.

Having come through that game with flying colours will only give the Sharks more confidence. It was a do-or-die situation, which acted as a first round of the finals.

Sharks certainly have the firepower to overhaul this Manly side and we wouldn’t be surprised to see them score a comfortable win.

Bookmakers will see plenty of action on the Sharks this week and the line could drop even further.

Momentum is typically important heading into the playoffs and it couldn’t be more opposite for these two teams.

The Eels looked the goods against Manly last week and it was a real confidence-building effort. They scored some terrific long-range tries and they showed us just how dangerous they can be.

However, the Broncos are trending in the opposite direction. They were thrashed by the Bulldogs last week and just making the playoffs was a positive for the Broncos.

They have struggled throughout the season and have never really scored a statement win. That could come this Sunday, but they’re going to need to find confidence from somewhere.

There seems to be a lack of leadership for the Broncos and there’s also problems with the halves. Anthony Milford catches the ball too deep and their offensive is stifled because of this.