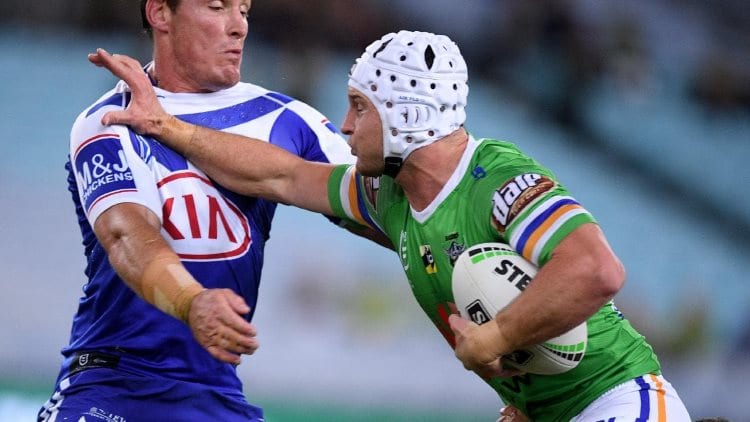 We have expert tips for NRL Round 13 this week which kicks off on Friday night with the Rabbitohs vs. Knights.

There are some great games this week and many of them will be affected by State of Origin Game 1.

The Rabbitohs couldn’t quite muster enough to win without their Origin stars last week but they will be better prepared for this.

The 26-14 loss to the Eels won’t dent their confidence overly much and they’re looking like one of the better teams in the competition.

Newcastle is also going well this season and find themselves in the unlikely situation of being in the top four after 12 weeks. They have an exciting squad but injuries could start to take their toll.

We’re expecting a close game but the Rabbitohs should come out ahead.

The Raiders scored a narrow two-point win over the Bulldogs last week but it wasn’t an overly good performance.

After holding a 10-0 lead, the Raiders quickly gave it up and those signs aren’t good for the future. They’ll have to produce a full 80-minute performance in order to beat the Tigers, which will be well rested.

Wests Tigers are currently sitting 10th on the ladder and have promised plenty this season. This could be their break out game and sneak into the playoff picture.

The Warriors are coming off one of their most dreadful performances against Brisbane and the week off would have needed to work wonders.

The 8-2 defeat was a dismal effort but they do play well against the Storm and hold one of the best records against them in the NRL.

Melbourne will have plenty of Origin stars returning from Wednesday’s game but they typically play well and it’s tough to keep this Storm team down.

Their form has been a little mixed this season but the Warriors would need play well to beat them.

This looks to be one of the tightest games of the week as two top-eight teams do battle.

The Sharks are the current favourites for this game after having a bye last week and they’re not overly affected by State of Origin.

On the other hand, Parramatta scored a good win last week over the Rabbitohs and they’ll derive plenty of benefit from that.

The 26-12 win should give them confidence but there won’t be much between these two teams.

The Cowboys have put a horrible start to the season behind them and they’re starting to look like a genuine playoff contender.

They weren’t huge when beating the Titans 6-4 on Sunday night, but they got the job done without Michael Morgan and that should give them some confidence.

The Sea Eagles will be heavily-affected by Origin and we’re unsure how that’s going to affect them. They could come out on fire, but they could also come out tired.

The all-Queensland battle always provides plenty of excitement but the Broncos should have the class edge.

They might have lost two quality players in the last three weeks with Kodi Nikorima and James Roberts leaving the team, but that might help galvanize this squad.

Gold Coast looked to have the advantage over the Cowboys last week but they’re simply not scoring enough points to win in the NRL. They scored only four points and they’ll need at least 16 to get the win this Sunday.

Broncos are paying good money in the head-to-head market.

This has been an awful season for the Panthers but they did enough to hold on for the win last Thursday night.

That makes it back-to-back wins for this top-eight touted team but they’ll need to do more in order to make the playoffs.

Playing the Roosters isn’t going to help their chances, despite the Roosters showing some signs of weakness over the last few weeks.

They’ve got a stacked team with many Origin stars and how they perform following Wednesday’s game will be interesting.

This isn’t quite the blockbuster game many would have hoped for on the Monday feature, but it should be a closely-fought contest.

The Bulldogs had their chance to beat the Raiders last week but came up just short. They made a strong late case but there wasn’t much leadership shown.

The Dragons are sitting in 13th and need some inspiration to make the playoffs. They have the players but they need to start putting wins together against teams like the Bulldogs.